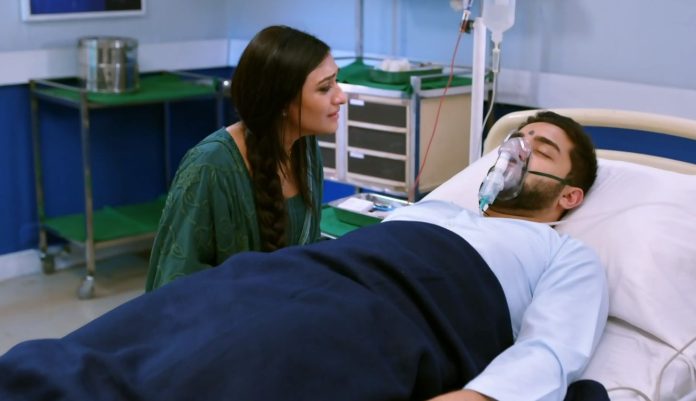 Bhagya Lakshmi 4th March 2022 Written Update Rishi love revival Rishi is unconscious. Lakshmi asks him to get back to them. She confesses her love for Rishi. She tells that she loves him a lot, he is her life, if anything happens to him, then even she can’t live. She cries for him. She holds his hand. Rishi gets a new life by her touch. She feels a current shock on holding his hand. She finds him moving his hand and breathing deeply. She rushes out to inform the doctor about Rishi’s reaction to her touch. The Oberois will soon learn that Lakshmi had visited Rishi and brought him back to life, by becoming a shield to his Markesh Dosh again. Meanwhile, Evil Balwinder returns in Lakshmi’s life with the same evil motives once again. Balwinder reaches Rano’s house and goes to see Lakshmi. Lakshmi senses someone’s presence. What will happen with Balwinder’s return? Keep reading.

Lakshmi confesses her love to Rishi. She tells that she is lost in him, she has become him, but he doesn’t love her. She asks how will they live in this manner. She wants to know why did he act heroic and risk his life, when he knows that he is her life. She worries that anything could have happened to him. She admits to him that she needs him for her own existence. She wants him to get up for her sake. She tells that he should wake up so that she gets awakened. She adds that his entire family is worried for him. She pleads with him.

She talks to him and holds his hand, just to experience a current shock by his touch. Rishi recalls their moments and gets back to life. Lakshmi asks him to open his eyes and talk to her. She tells him that she wants to see him with her. Rishi opens his eyes and gets to see Lakshmi. He is finally revived by Lakshmi. Nurse comes back to the ward. She finds Rishi revived to his consciousness by his wife Lakshmi. She goes to inform the doctor. Lakshmi asks Rishi not to close his eyes, and just be still until the family comes. She tells that Neelam and family are worried for his life.

She asks him to stay conscious. Doctor treats Neelam, who fainted due to stress. He advises her to take rest. Neelam’s stress doesn’t subside. She is still occupied with the thoughts of tension for Rishi’s life. She tells Dadi that she just wants someone to awaken Rishi. Malishka assures that she will awaken Rishi by her love. She tells that Rishi loves her a lot, he will only listen to her. She rushes to meet Rishi. Lakshmi tells Rishi that she will just call Neelam and come. She remembers Neelam’s words and gets discouraged to reach out to her.

Nurse tells Lakshmi that the doctor is coming, Rishi is conscious now, he is out of danger. She tells that Rishi loves Lakshmi the most, because she is the one to whom he responded. She adds that Lakshmi has returned a life to Rishi. Lakshmi hears Malishka yelling outside. Malishka gets unstoppable. She goes to Rishi. Nurse tells the doctor that Rishi is conscious. Doctor asks Malishka to go out. Nurse finds Lakshmi gone. Rishi opens eyes to see Malishka. Doctor asks her to give the good news to the family members. He examines Rishi. Nurse looks for Lakshmi. She realizes that Lakshmi left from the window. Lakshmi recalls her true moments with Rishi. She feels delighted thinking of Rishi’s love.

She is happy that he is stable now. She prays for his long life. Ayush finds Lakshmi praying for Rishi and Neelam in the temple. He realizes that she is the one who has come to give Rishi a new life. Lakshmi wishes that Neelam gets peace. Malishka informs Neelam and family that Rishi has awakened, he is conscious now, he responded to her call. The family is thankful that Rishi is out of danger. Malishka tells that Rishi agreed to her and came back to life. Kiran feels that Rishi really loves Malishka a lot. She congratulates Malishka.

Doctor tells the nurse that it’s a miracle that Rishi got conscious. Nurse goes out and collides with Neelam. She tells Neelam that it’s a miracle, Rishi opened his eyes and responded to the person he loves the most. Malishka tells that he had heard her voice and opened his eyes. Nurse tells that Malishka wasn’t that person. Neelam tells that Malishka is her would be Bahu. She doesn’t let the nurse complete her statement about Lakshmi. The family goes to meet Rishi. Malishka tells Rishi that she loves him a lot and wants him okay. Rishi sees everyone and asks about Lakshmi, shocking them. Ayush stops Lakshmi, who asks him to keep her presence a secret. Neelam tells Rishi that Lakshmi didn’t come.

Rishi admits that he had seen Lakshmi, she had come to meet him. Lakshmi tells Ayush that Rishi won’t remember their meeting. Ayush apologizes to her for hiding the entire truth. He feels that the family members weren’t honest to her, they had hurt her a lot. She tells that she was really upset and wanted to confront them about the truth. She tells that she met Rishi and the family, and felt she had a right on them. She gets emotional. She tells him that she is feeling this love for the family, which she would have not felt if she knew the truth beforehand. She calls it fair that the truth was hidden from her. She tells that she has got relations but with the added pain and sorrow. She is really hurt.

She tells that Rishi is in her heart, he had made her realize love. Ayush cries on hearing her. Rishi tells that Lakshmi was with him. Neelam and Virender get worried. Rishi adds that Lakshmi held his hand and he felt a current shock, she had awakened him and then she left. Lakshmi tells Ayush that she loves the family a lot. She requests him to not tell anyone about her feelings. He tells that everybody should know that she is a nice person. He adds that he will tell the world that she had visited Rishi by forgetting the past. She asks him to just keep it to himself. She trusts him. She knows that he won’t break her trust. He agrees to her. Rishi tells Malishka that Lakshmi was just here with him.

Reviewed Rating for Bhagya Lakshmi 4th March 2022 Written Update Rishi revival: 5/5 This rating is solely based on the opinion of the writer. You may post your own take on the show in the comment section below.