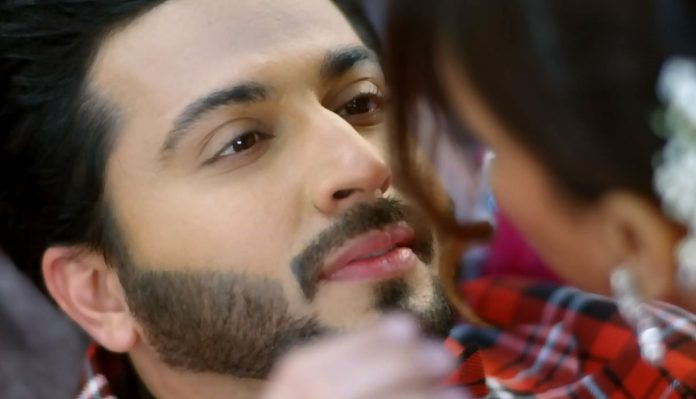 Kundali Bhagya 4th March 2022 Written Update Romance twist Naagre meets Preeta. He tells that she knows it well why he is working for her. She tells that if he doesn’t do so, then she will tell his truth to everyone. Preeta helps Karan in wearing the coat. His arm gets stuck in the coat. She asks him to stand straight, she will help him. He tells that he will help himself. They both fall on the bed, and get into a romantic moment. Preeta throws an amazing party to celebrate Mahesh’s birthday. Everyone gets dressed in filmi costumes according to the Bollywood retro theme. Preeta and Karan get into their retro looks. Karan romances her. He kisses her with love.

Preeta holds her cheek in disbelief. She is trying hard to keep Karan away, but Karan doesn’t listen to her. They share a romantic moment. He finds her getting tensed in shyness. He jokes that he will tell everyone whatever happened between them. She tells that she isn’t scared, she will lie to them and make a funny story. She adds that she didn’t feel afraid. He asks her if she is saying it for real. She turns happy after receiving his kiss. Preeta tells that they shall go and welcome the guests. Karan and Preeta attend the guests, hoping that Mahesh’s birthday party is a success.

Earlier in the show, Preeta happily helps Shrishti with the party outfit. She tells that the judge will come in the party, he will see Mahesh normal and happy, then she will ask the judge to certify Mahesh normal. She gets hopeful. She doesn’t want Prithvi to get another nurse to torture Mahesh. She wants to protect Mahesh from the enemies. Biji blesses her. Preeta makes her proud. Biji wishes that the house gets the real owner back. Prithvi dresses as Gabbar. He makes a drink for himself. He sees Preeta’s stunning retro look for the party. He gets his eyes on her. He thinks why did Preeta deck up and come to celebrate with the Luthras. He doesn’t know what is she planning to do.

Prithvi asks Preeta the motive behind throwing the big party. She asks him not to bother and just enjoy. He tells that he has thrown many such parties before. She replies that this one is exceptional and he will always remember it. She knows his worries well. He reminds that Sarla wanted her to marry him. She tells that Sarla wants her to get him arrested now. He asks her what does she want, what is she intending to do. She has guests to attend. She sounds busy and tries to excuse herself. He asks her not to anger him. He warns her to get an answer. She smiles calmly.

Meanwhile, Shrishti tells Preeta that she has done her work. She asks for the party dress. Preeta tells that its ready. Shrishti compliments her. She goes to the guest room to change her clothes. She sees Sameer in her way. She is glad that he has put his mind to use. Sameer wonders if that was a compliment or a taunt. Other side, Naagre walks in. Preeta welcomes him in the party. She asks him why does he look upset. She really doesn’t care and makes it evident to him. She tells that she didn’t want him to work for Prithvi, but for her. Naagre tells that she knows why he is helpless to work for her. She threatens of revealing the truth which she kept recorded.

She asks him to enjoy the party. She permits him to meet Prithvi if he wants. Prithvi calls Naagre a cheat. He warns Naagre for backstabbing his trust. He asks Naagre what’s going on. Naagre reveals that Preeta is planning something big, they aren’t aware of it. Karan sees Mahesh with the family. Mahesh gets ready for the party. Bani gets the sweets for Mahesh. He asks for the laddoos made by Rakhi. Bani tells that she has made the sweets for him. She feeds it to him. Mahesh likes it. He tells that he is still a little kid for his mom.

Bani compliments his looks. She applies a black dot to him. Mahesh tells that Rakhi will not like it. Karan finds Mahesh behaving normal, like he doesn’t remember anything about his basement stay. He wishes that nothing goes wrong in the party. He has a fear in his heart. Mahesh asks Rakhi who is more handsome, Karan or him. Rakhi tells that both of them are handsome. Karan meets Mahesh happily. Mahesh suddenly gets silent. Rakhi asks Karan to go and get ready for the party. She wishes that Karan doesn’t lose heart. Karan wishes that Mahesh recovers soon and hugs him. He goes to get decked up. Preeta helps Karan in wearing the coat. They fall over the bed. They land into a moment. She feels shy by his touch.

They recall their best moments in the flashbacks. Prithvi asks Naagre why is Preeta sweetly welcoming him. he tells that Preeta has invited Naagre and has kept him on her side by blackmailing him. He wants to know why did she hire just Naagre. Naagre tells that its not easy to stay corrupt. He is helpless to work for Preeta, because he can’t risk his life and career to defeat her. He has to earn much money, some way or the other. He tells that he can’t lose a good client, Preeta is struggling a lot, she is really smart. Prithvi tells that Preeta’s smartness angers him. Naagre tells that Preeta is inviting the judge in the party, the same judge who declared Mahesh mentally unstable. Prithvi is shocked to know this. He tells that it can’t happen, it’s a bad news for him. Naagre asks him not to get hyper.

He doesn’t think that the judge will come easily on her invite. He wants to know what does Preeta want. Prithvi tells that Preeta wants to destroy him. Karan laughs on Preeta when she gets shy. He tells that he will tell everyone about their moment. She tells that she will also fake stories about him, and then make them laugh on him. He tells that she is lying cleanly. They get into a funny banter. She tells that she will lie, because he has no proof against her. He asks her not to blackmail him. Biji and Shrishti get ready. Karan kisses Preeta when she threatens of faking the funny stories about him. He teases her and laughs. Preeta smiles. She doesn’t want to think of anything, than her goals. She has to rescue Mahesh and prove him mentally stable first. She directs her mind on her goals.

Reviewed Rating for Kundali Bhagya 4th March 2022 Written Update Romance twist: 5/5 This rating is solely based on the opinion of the writer. You may post your own take on the show in the comment section below.