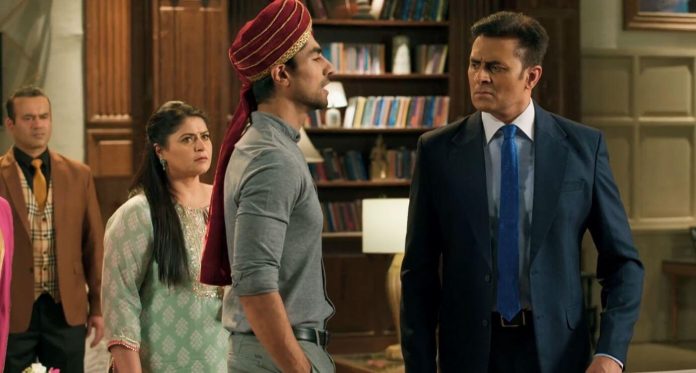 Yeh Rishta 3rd March 2022 Written Update Abhi faces wrath Manish is seen performing Abhimanyu’s aarti. Flashback shows Abhimanyu screaming and telling Manish that one day, he will arrive with his procession and he (Manish) will be performing his aarti. Flashback ends. Everyone except Aarohi feels happy with everything getting better. Manish gives a shagun envelope to Abhimanyu and the latter accepts it. Flashback shows angry Manish giving Abhimanyu the fees for treating Akshara. Flashback ends. Abhimanyu jokes and asks Manish if it is his surgery fee. Manish cutely scolds Abhimanyu and says its shagun money.

Abhimanyu again jokes, takes Manish’s blessings and hugs him tightly. Manish blesses Abhimanyu to always be happy. Akshara gets happy. Swarna gives a gold coin to Anisha as her shagun and asks her to take care of it. Suhasini tells Anisha that she will get her remaining shagun when both the families will together perform the wedding ceremonies. Kairav gets happy. Akshara says love’s piggy bank remains empty without family’s coins/blessings. She asks if love got completed now. Anisha emotionally waves her head in yes. Akshara tells Abhimanyu that he should talk to all his family members about whatever happened and discuss marriage with them.

Abhimanyu tells Akshara that she always talks about family. Akshara asks Abhimanyu if he has any problem. Manish asks Abhimanyu if she should come to talk to Harshvardhan and Anand. Abhimanyu tells Manish he will himself talk to his family first. Neil asks everyone to be as they are giving vidaai feelings like Birlas are taking Akshara right away. Only Aarohi feels irritated. Abhimanyu apologizes to Goenkas for hurting them in the process of fighting for his love. He also thanks Goenkas for agreeing to his and Akshara’s marriage as well as Anisha and Kairav’s marriage. Suhasini tells Abhimanyu that he has increased their respect by apologizing to them.

Birlas start leaving. Akshara and Abhimanyu give a happy smile to each other. Kairav and Anisha happily wave bye to each other. On the way to his house, Abhimanyu plays “Pyar Tumhe Kis Mod Pe Le Aaya” in his car. Abhimanyu’s siblings tease Abhimanyu with this song. All Birla siblings enjoy their drive together with this old song. Vansh wonders when did Abhimanyu planned all this. Swarna also wonders the same. Kairav says Abhimanyu does everything before someone even thinks of it. Vansh and Kairav praise Manish and Abhimanyu. Manish says Akshara explained him like Naira. He says Akshara made him realize that he doesn’t have the right to snatch other’s happiness or break relations for his own children’s happiness.

Manish says he sometimes sees Naira and Kartik in Akshara and Abhimanyu. Suhasini says Akshara and Abhimanyu’s jodi would be perfect just like that of Naira and Kartik. Aarohi feels angry. Manish hopes Birlas would agree for Akshara-Abhimanyu and Kairav-Anisha’s marriage just like him. Akshara feels scared and prays that everything goes right at Birla house. At Birla house, Harshvardhan feels irritated with the suspense/secret going on in between Manish and Abhimanyu. He tells Anand that he is sure that Manish did something big at their house. At Goenka Mansion, Akshara sees her family watching and reminiscing Naira and Kartik’s memories. Except Aarohi and Manish, everyone dances with each other happily.

Akshara runs and hugs Manish happily. Manish caresses Akshara like her father. Harshvardhan gets more irritated and tense on knowing that some patient died at their hospital after the operation. He tells Anand that the dead patient’s family is creating a scene at the hospital and threatening to sue their hospital. Harshvardhan says another problem arises before the earlier problem gets solved. At the same time Manjiri comes there. Harshvardhan asks Manjiri if she wants to say something. He asks Manjiri where all the children of the house vanished.

Abhimanyu returns home along with his siblings dancing happily. He enters with a sweet box and groom pagdi on his head. Abhimanyu tells everyone that he came with good news. He makes Manjiri wear his pagdi and takes her blessings. Abhimanyu hugs Manjiri and says Manish agreed for marriage without any condition. This news makes Manjiri happy, but shocks Harshvardhan. Abhimanyu shows the shagun envelope given by Manish to Manjiri. Manjiri gets emotional and happy. Abhimanyu walks forward and takes Mahima and Anand’s blessings. Abhimanyu offers sweets to Harshvardhan. At Goenka house, Kairav says finally his sister (Akshara) got her happiness.

In a taunting way, Aarohi says Akshara always gets everything and now has got Abhimanyu too. She says everyone would surely celebrate as it’s Akshara’s happiness. Suhasini handles the upcoming argument and says that everyone will only talk about happiness today. Manish says he is happy seeing his children happy. Akshara says that everyday can be happy and feel like a festival with elders’ blessings and support. She hopes everything will go fine at Birla house, like at her home. Harshvardhan starts breaking things and furniture in anger. He says he understood that Manish was misleading his son earlier. Harshvardhan says Manish black magic regarding Akshara worked on Abhimanyu.

He gets angry at Manjiri for knowing everything. Harshvardhan tells Manjiri that she always thinks about her son and doesn’t care about her husband. Abhimanyu tells Harshvardhan that he can’t talk to his mother this way and in a loud voice. Harshvardhan says to Abhimanyu that he will talk to Manjiri as he pleases and he would have to hear it. This angers Abhimanyu. At Goenka Mansion, Manish makes Akshara and Aarohi eat sweets. Harshvardhan says Abhimanyu’s arrest scene, Goenkas taking complaint back and Manish’s heart attack scene was all an evil plan/chess game of Akshara with Birlas.

He says slowly all members of the Birla family are getting captured by Akshara. Abhimanyu asks Harshvardhan to stop his nonsense. When Harshvardhan refuses to stop his nonsense against Akshara, Abhimanyu loses his control. Mahima stops Abhimanyu on time. She says no girl could be better than Akshara for Abhimanyu. Mahima asks Harshvardhan what Akshara lacks. She says Akshara has all the qualities of being a good daughter-in-law. Mahima says Akshara is educated, mature and belongs to a good family. She says children without parents get spoiled but Akshara is just like Manjiri who prioritizes family above herself.

At Goenka house, Aarohi feels jealous of Akshara’s happiness. She thinks of breaking Akshara’s favorite music instrument but stops hearing Akshara coming towards her. Akshara comes and asks Aarohi why she isn’t celebrating with everyone downstairs. Aarohi tauntingly says she has work to do as for some people marriage, music and dance is life. Akshara asks Aarohi if she is fine. Aarohi pretends to be happy for Akshara and asks her if she is tense about Birla’s reaction to her and Abhimanyu’s marriage news. Unaware of Aarohi’s jealousy and anger, Akshara feels happy thinking that Aarohi has no problem with her and Abhimanyu’s marriage. She hugs and tells Aarohi that she would also get her prince charming who would take her with him.

Irritated Aarohi asks Akshara to marry, make her new family and serve her in-laws. She says she is just interested in all this, instead wants to focus on her career. Aarohi says she wants to achieve something big in life and does not want to become anyone’s bride. At Birla house, Abhimanyu tells Harshvardhan that he has tied the rosary in the name of Akshara. He says his name’s mehndi would get applied in Akshara’s hand, he would take procession to Akshara’s house and Akshara’s palanquin will come to Birla house only. Abhimanyu asks Harshvardhan to chill. He asks Harshvardhan to not attend his and Akshara’s wedding if his blood would boil seeing Akshara becoming his bride/wife.

Reviewed Rating for Yeh Rishta 3rd March 2022 Written Update Abhi faces wrath: 4/5 This rating is solely based on the opinion of the writer. You may post your own take on the show in the comment section below.