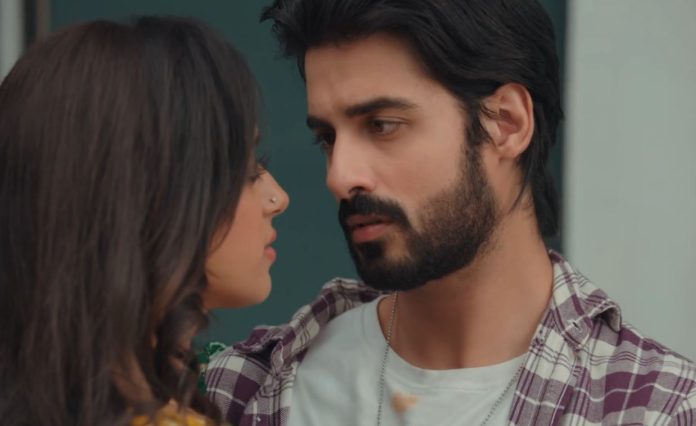 Yeh Hai Chahatein 5th March 2022 Written Update Rudra targeted Saaransh requests Sharda to get a room adjoined with his room ready for Ruhi as he wants to stay with Ruhi. Sharda says sure. Saaransh says till the room gets ready, Ruhi will stay in his room. He takes Ruhi inside with him. Vaijayanti asks Rudra what is Ruhi doing in Khurana house. She says how can Ruhi stay in Khurana house being Yuvraj’s daughter. Rudra leaves asking Sharda, who gave Vaijayanti the right to speak in his matters. Vaijayanti asks Sharda what is happening, why Rudra is getting vexed at her instead of scolding Saaransh.

Sharda tells Vaijayanti that Rudra got angry at her because she is wrong. She asks Vaijayanti to think about how little Ruhi will live without her mother and that’s why Saaransh brought her. Sharda asks Vaijayanti to behave mature as even Saaransh is behaving mature being a kid. As Sharda leaves, Vaijayanti wonders why Saaransh is taking Ruhi’s care when Yuvraj is alive. Ruhi likes Saaransh’s room and praises it. She hugs Saaransh and thanks him for helping her. Saaransh tells Ruhi that he is like her elder brother. Ruhi tells Saaransh that he is exactly like the elder brother she always wished for.

Ruhi tells Saransh that she would have got alone without her mother but he gave her both shelter and a brother. Saaransh gets emotional and asks Ruhi to now consider him as her elder brother. Ruhi asks Saaransh if she can call him “Saaransh Bhaiya”. Saaransh signs yes. Ruhi hugs Saaransh happily and tightly. She asks Saaransh how he will get her mother released from prison. Saaransh tells Ruhi that he will contact Delhi’s big lawyers, discuss Prisha’s case with them and make them fight and win the case. Saaransh goes to bring something to eat for Ruhi.

Yuvraj further manipulates Vaijayanti by telling her that soon, Rudra’s anger would calm down. He says after this Rudra would need Prisha and his children. Yuvraj further tells Vaijayanti that Rudra would do anything to get Prisha released from prison. He scares Vaijayanti by telling her that she will be out of Rudra’s life, once Prisha will get released from prison. On the other hand, Saaransh is seen meeting a lawyer. The lawyer reads Prisha’s case file. He refuses to fight Prisha’s case. Saaransh asks why. The lawyer tells Saaransh that Prisha’s case has become too complicated now as all the evidence is against Prisha and moreover she is a criminal who ran away from law.

He says the court will never forgive Prisha for running away just before her death sentence. The lawyer further tells Saaransh that he could have done something if he would have brought this case to him five years ago as Prisha was just a convict at that time. He also tells Saaransh that it’s an open and shut case and it’s almost impossible to win this case. After this Saaransh meets many other lawyers but everyone refuses to take up Prisha’s case. Later Saaransh meets Prisha in prison. Prisha asks Saaransh about Ruhi’s condition. Saaransh asks Prisha to not take tension as Ruhi is staying at her own house (Khurana Mansion) with her elder brother.

Prisha smiles and tells Saaransh that she is not worried now as Ruhi is with her elder brother and father in her house. She says Rudra too has the right to his happiness of being with his daughter. Prisha says she is ready for any punishment as she knows that her kids are safe with their father. Saaransh asks Prisha to not say like this as he is trying his best to save her. He tells Prisha that he will get her released from prison, once a lawyer gets agreed to take her case. He tells Prisha that the whole truth would get out once her case gets reopened. Saaransh says soon everyone will get to know that his mother isn’t a criminal.

Prisha recalls how 5 years ago, Rudra mistakenly shot Venky in their fight and how she turned all the murder evidences against her to save Rudra. She thinks if her case would get reopened, everyone will get to know that not she but Rudra shot Venky. She tells Saaransh that she doesn’t want this case to get reopened. Saaransh asks Prisha why. Prisha tells Saaransh that according to all lawyers’ opinions this case is an open and shut case and she doesn’t want his efforts to go useless. Saaransh tells Prisha that he won’t give up. He tells Prisha that he won’t leave her side like she never left his side. Saaransh leaves telling Prisha that he would do anything but get released from prison.

Prisha worries about how she should stop her case from re-opening. Rudra sees that Ruhi is feeling difficult to sleep. Ruhi sees Rudra watching her and ignores him. Rudra tells Sharda about this. Sharda tells Rudra that Ruhi is behaving just like he used to behave in his childhood. Rudra tells Sharda that Ruhi never lived alone like this ever and thus finding it difficult to fall asleep. Sharda asks Rudra to go to Ruhi and help her fall asleep. Rudra tells Sharda that being his daughter, Ruhi is short-tempered like him. He says Ruhi will get angry at him if he goes near her. Rudra says Ruhi will get upset and push him away again. He asks Sharda what he should do as he can’t tolerate seeing his daughter in pain.

Sharda asks Rudra to not worry as she will take care of Ruhi. She asks Ruhi to help her fall asleep. Ruhi agrees to Sharda. She tells Sharda about how she used to peacefully sleep with Rudra in Rohtak, but now is angry with him. Ruhi asks Sharda whom she used to sleep with when she wasn’t here. Sharda stutters and tells Ruhi that she used to sleep with Saaransh. Ruhi asks a few more questions from Sharda and the latter answers the former. After questions, Ruhi makes Sharda sleep by telling her stories. Rudra watches all this and smiles. In this process, Ruhi falls asleep. Rudra feels relaxed and thanks Sharda. He thinks that he missed all these moments with his daughter because of Prisha.

Rudra says Prisha snatched Ruhi’s childhood from him by keeping her away from him. He says both he and Prisha are suffering now. Saaransh asks Rudra why he is getting sad now as Ruhi’s present condition is because of him. Rudra asks Saaransh to listen to him once with a cool mind. Saaransh asks Rudra why he should talk to him now as he snatched his mother from him once again, by sending her to prison. Rudra gets shocked when Saaransh tells him that since morning he was finding a lawyer for Prisha’s case. He says everyone refused to take up Prisha’s case by saying that Prisha can’t win this case. Rudra says Prisha should get punished as she is a criminal who ran away from law.

In the next episode, Ruhi will ask Saaransh if he got a lawyer for Prisha’s case. Saaransh will reply yes. Both Saaransh and Ruhi will start troubling Rudra. They will upload Rudra’s covered with soap lather photographs on social media. Rudra will get shocked seeing this. Later, Ruhi and Saaransh together will cut Rudra’s clothes. Rudra will get shocked when his employee will tell him that he is wearing torn clothes.

Reviewed Rating for Yeh Hai Chahatein 5th March 2022 Written Update Rudra targeted: 5/5 This rating is solely based on the opinion of the writer. You may post your own take on the show in the comment section below.