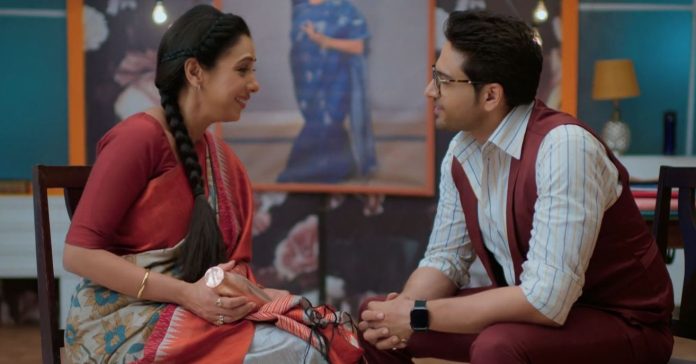 Anupama 8th March 2022 Written Update Anuj back in business Anuj and Anupama are seen sitting inside an auto. Anuj keeps his hand behind Anupama. They get lost in each other. Anuj drops Anupama outside the Shah house. Anupama wishes, “All the best” to Anuj. Anuj tells Anupama that he will text her. Anupama asks him why. Anuj stops in between telling Anupama he is not one of them who forgets his wife after getting busy in office work. Seeing Anupama smiling sarcastically, Anuj tells Anupama that he meant he will text her whenever he will miss her.

Anupama tells Anuj that she won’t leave him if he won’t text her. Anuj asks Anupama to trust him. He asks her to go to Kinjal as she needs her. Vanraj comes to the door and starts talking to Anupama about Baa and Kinjal. Anuj and Kavya feel jealous seeing Anupama and Vanraj together. Kavya leaves thinking that it’s better to focus on her own work. At the dining table, Anupama and Baa are seen feeding healthy food to Kinjal. Kavya and Vanraj come downstairs all ready for the office. Vanraj asks Kinjal to tell him if she wants anything from outside. He also asks Kinjal to take the car as he and Kavya can go to the office by cab too.

Kinjal tells Vanraj that she is working from home today. Vanraj tells Kinjal that she can take the car whenever she wants as he and Kavya can travel by cab. Kinjal says okay. Kavya feels angry hearing all this. Kinjal asks Baa and Anupama to not feed her more. After this Baa asks Kinjal to have water but she refuses. Baa tries to make Kinjal drink like a kid. She tells Kinjal that she will if she doesn’t. Rakhi comes there and snatches Alkaline water from Baa. She tells Baa that she sent Alkaline water for Kinjal, not her. Kinjal asks Rakhi why she is being so insolent as Baa was just joking.

Rakhi says Baa would have drunk the whole bottle in a joke. Baa asks Rakhi to fill up black water from the handpump in their street. Anupama asks Rakhi and Baa to not argue over a small thing. Rakhi tells Anupama that she sends expensive stuff for Kinjal, not for beggars like Shahs. Baa shouts and asks Rakhi whom she is calling beggars, as they eat by earning from their efforts, not hers. Rakhi tells Baa that Kinjal won’t eat cheap things like they eat and that is why she has brought a lot of stuff from her side. She warns Baa to not try touching things that she bought for Kinjal.

Anupama stops Rakhi’s nonsense and asks her to take her things back as they don’t want it. Rakhi asks Anupama what Kinjal will eat, if she takes her things back. She asks if Kinjal will eat Khakhra, Phapda, and Thepla. Baa asks what is the problem in all these Gujarati snacks. She says they will also make Kinjal have green vegetables, fruits, milk, curd, jaggery and clarified butter (ghee) everything. Kinjal asks Rakhi to not be tense as she will eat whatever she will want to. Rakhi asks Kinjal why she won’t be tense as it’s about her daughter and her grandchild. Anupama tells Rakhi that Kinjal and her upcoming child are related to them too.

Rakhi says she can’t trust anyone thus she will visit Shah house daily to keep a check. She asks about Paritosh’s whereabouts. Paritosh comes there. Rakhi asks Paritosh and Kinjal to come with her as she has got them an appointment with the best gynecologist of Ahmedabad. She says the gynecologist will guide them for their pregnancy in the bestest way. Rakhi senses something equivocal going on in Shah house seeing everyone’s expressions. Kinjal signs Paritosh to not let Rakhi know what is going on. Paritosh apologizes to Rakhi and tells her that he can’t come as he has meetings lined up today and leaves.

Rakhi asks Kinjal what is going on. She decrypts that something is going on as Paritosh being a father doesn’t look interested in his upcoming child. Kinjal asks Rakhi to not create an issue as Paritosh is genuinely busy. She tells Rakhi that both of them can go to the gynecologist. Rakhi thinks about what is going on. Anupama and Samar discuss happenings at Shah house. Samar asks Anupama to not forget her dance competition in all this. Anupama tells Samar that she will pour all her efforts into the dance competition as it’s Anuj’s dream. Samar tells Anupama that Anuj has another dream, which only she can fulfill. Anupama asks Samar how he knows about it.

He requests Anupama to not push happiness so much that fate might get offensive/angry. Samar requests Anupama to not wait more as time and life might get out of hand. At Shah house, Baa is seen looking at Bapuji secretly with love. Rakhi scares Baa and asks her if she looks at her husband like this even at this age. Baa tells Rakhi that Bapuji is Ahmedabad’s Vinod Khanna for her. She asks Rakhi why she came back. Rakhi reminds Baa that she already told everyone that she will keep visiting Shah house now. Baa tells Rakhi that Kinjal has gone outside for some work and thus there is no reason for her to be at Shah houde. Rakhi tells Baa that Kinjal didn’t come to the gynecologist with her, thus she brought the gynecologist at Shah house.

Rakhi introduces Baa to Dr. Rishi Rawal, the best gynecologist of Ahmedabad and son of her family friend. Baa asks Rakhi how a man can be a woman’s doctor. Rakhi explains to Baa that Doctor is a doctor. She asks Kinjal to leave for now as Kinjal isn’t at home. Rakhi tells Dr, Rishi that she will call him as Kinjal returns. Dr. Rishi leaves. Baa tells Rakhi that Kinjal’s delivery will be done by the doctor who did Anupama’s all kids delivery. Rakhi tells Baa that Kinjal’s won’t be done by any local gynecologist. Baa tells Rakhi that Paritosh’s baby will be delivered by the doctor who delivered him in the past and they will get a discount too. Rakhi tells Baa that her grandchild is coming, not any mixer grinder that she is talking about a discount.

Rakhi feels thankful to her upcoming grandchild that she got a gate pass to visit Shah house. On the other hand, Anupama dances recalling Samar’s words. Anuj comes and saves Anupama from falling down. Anuj asks Anupama where was her mind. He also asks Anupama what if he wouldn’t have been here. Anupama tells Anuj that he is and will always be there. She asks Anuj if he would always be with her. Anuj promises Anupama that he will always be with her. Anupama asks Anuj how was his meeting. Anuj tells Anupama that his meeting went well as his friend made him his partner. He explains to Anupama that his friend will invest in his ideas and efforts.

Anuj says he is thankful towards his friend that he has so much faith in him. Anupama tells Anuj that this trust is his real earning, which he earned by his honesty and efforts. She praises Anuj and his personality. Anuj gets happy hearing all this. He tells Anupama that her way of expressing love is unique as she didn’t ask him for expensive things but his success. Anupama tells Anuj that if he belongs to her then his success too. She tells Anuj that he doesn’t know how clever she is. Anuj laughs hearing it. Anuj promises Anupama that he will become more successful than earlier as he has his fate (Anupama) with him.

Anupama wards off the evil eye from Anuj. Anuj puts a kaala teeka behind Anupama’s ear. Anupama gets emotional and asks for a party from Anuj. Anuj asks how they will party. Anupama asks Anuj to come on a date with her. This makes Anuj happy and he agrees to go on a date with Anupama. Electricity goes off as Anuj and Anupama start leaving the academy for their date. Kinjal comes to the academy. She asks Anupama if she can come to the gynecologist for her. Anuj and Anupama get sad.

In the next episode, the doctor will examine Kinjal. She will tell Kinjal Anupama that Kinjal’s pregnancy can have complications as Kinjal is very weak. Rakhi will tell Vanraj that his spark in the business world is going to dim as Anuj is making a comeback to the business world. Vanraj will get shocked hearing it but won’t show it.

Reviewed Rating for Anupama 8th March 2022 Written Update Anuj back in business: 3/5 This rating is solely based on the opinion of the writer. You may post your own take on the show in the comment section below.