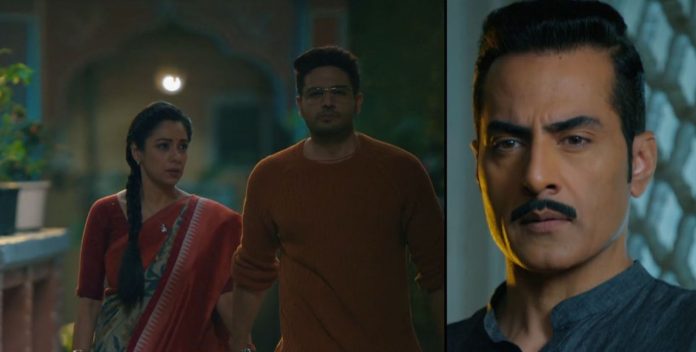 Anupama 9th March 2022 Written Update Anuj’s decision Kinjal tells Anuj and Anupama that she will go alone to the gynecologist if they have some other plan. Anuj tells Kinjal that he and Anupama were leaving for home only. He asks Anupama to go with Kinjal. Anupama starts leaving with Kinjal. Anuj sends a text message to Anupama telling her that he will wait for her at the dinner. Anupama looks back guiltily at Anuj and then leaves. Anuj feels worried for his and Anupama’s relationship.

She asks Vanraj if he snatched the signing authority from Malvika or not. Vanraj stops drinking water, hearing this. Rakhi understands Vanraj’s expressions. She asks Vanraj if he is still an employee/servant in a big company. This angers everyone. Rakhi tells Vanraj truth, always pricks and tastes bitter like a neem leaf. Kavya asks Rakhi if she has come to insult her husband. Rakhi tells Kavya that she is showing his real place to her husband. Vanraj tells Rakhi that he will succeed soon. Rakhi laughs hearing it. Vanraj tells Rakhi that Shah house belongs to him and even Kinjal is his daughter-in-law. He threatens Rakhi to get out or otherwise he will make Kinjal stop her from visiting Shah house.

Rakhi gets shocked, while Vanraj laughs evilly. He asks Baa when Kinjal is going to return as she will be the first to push to-be grandmother. Baa says Kinjal went to the doctor with Anupama. Vanrah says he will tolerate Rakhi for some more time. Bapuji overhears all this and hopes that Anupama’s happiness doesn’t get crushed in her children’s responsibility. Baa leaves to make tea, while Kavya and Paritosh leave to freshen up. Rakhi shocks Vanraj by telling him that his spark in the business world is going to end as Anuj is all set to return to the business world. Vanraj changes his expressions immediately. He tells Rakhi that time has changed now. Rakhi reminds Vanraj that Anuj is the king of the business world. She tells Vanraj that he might again be seen greeting Anuj, when he will grab his throne back.

Rakhi also reminds Vanraj that lady luck Anupama is in Anuj’s favor and support. This angers Vanraj. On the other hand, Anuj is seen placing food on the dining table. Side by side he is taking his work calls. Anuj thinks he and Anupama can have a date at home, if not outside. He wonders why Anupama hasn’t returned till now. Anupama and Kinjal are seen discussing Kinjal’s pregnancy with the gynecologist. Gynecologist tells them that Kinjal can suffer complications in pregnancy as she is very weak. This shocks and scares Kinjal and Anupama. Gynecologist tells Kinjal that complications are not there till now but can arise. She also tells Kinjal that she will have to take care of her diet. Anupama asks Kinjal to take deep breaths and not get scared.

Kinjal does what Anupama tells her. Anupama explains to Kinjal that body health depends on brain and heart health. She tells Kinjal that she is with her and such things happen in pregnancy. Doctor asks Kinjal to remain happy and visit her if any pain arises in her abdomen. Anupama promises to take full care of Kinjal. Anuj is seen waiting for Anupama. He receives Vanraj’s call. Vanraj tells Anuj that he called to say, “All the best” to him. He tells Anuj that he heard that he is busy in meetings these days. Vanraj asks Anuj if he should talk to Malvika to offer him some post in the company like he talked to Malvika for him in the past.

He also offers money to Anuj for business with evil intentions. Anuj refuses Vanraj’s help. Paritosh recalls his family’s happiness on hearing about Kinjal’s pregnancy. He also recalls his and Kinjal’s argument over their upcoming baby. Samar comes and sees Paritosh puzzled in his thoughts. He requests Paritosh to not become like Vanraj. Samar tries to convince Paritosh to understand Kinjal’s feelings and love for him. He also tries to make Paritosh realize that Kinjal left her comfort and rich lifestyle and even fought her mother for marrying him. Samar tells Paritosh that Kinjal took care of Shah house in Anupama’s absence. He explains to Paritosh that even the whole family together can’t take his place in Kinjal’s life. Samar requests Paritosh to support Kinjal and spend as much time as possible with her.

Anupama says sometimes some girls get scared with delivery pain and child responsibility but they should understand that being a mother is an honor. Kinjal tells Anupama that she wouldn’t be so anxious if Paritosh would have been with her. She says she doesn’t want paritosh to miss even one moment of their pregnancy journey. Anupama tells Kinjal that she has also gone through this pain. She also tells Kinjal that Vanraj used to remain busy with his work and friends, when she was pregnant with Paritosh. Anupama further tells Kinjal that she knows the pain when a husband doesn’t give time to their wives in her pregnancy period.

Anupama tells Kinjal that she won’t let this happen to her. She also tells Kinjal that she and Paritosh will together enjoy their pregnancy period. In the next episode, Vanraj will tell Anupama that she will have to stay at Shah house till Kinjal’s anxiety persists. He will smirk seeing Anupama tying her saree to Shah house’s main door and apologizing to Anuj. Anuj will open Anupama’s saree knot from Shah’s main door and will take her with him. This action of Anuj will shock Vanraj.

Reviewed Rating for Anupama 9th March 2022 Written Update Anuj’s decision: 5/5 This rating is solely based on the opinion of the writer. You may post your own take on the show in the comment section below.