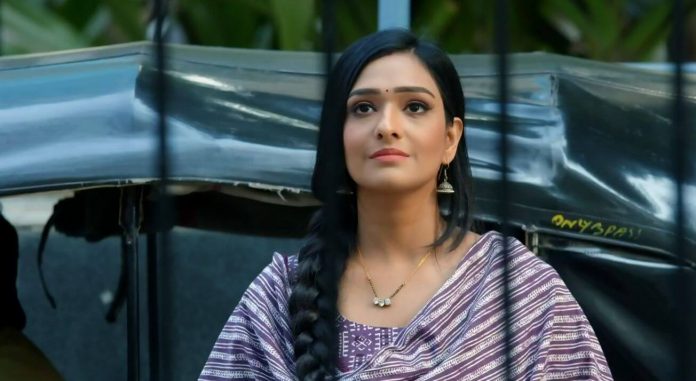 Bhagya Lakshmi 10th March 2022 Written Update Lakshmi returns Rano tells Balwinder that she had messaged him clearly about their change of plan, because Shalu has gone with Lakshmi to Rishi’s house for dinner. Lakshmi and her sisters come to Oberoi house to meet Rishi. Balwinder tells that she had messaged Lakshmi instead him. he asks her what would happen if Lakshmi reads the message. Rano is shocked when she rechecks the message sent to Lakshmi. Sonia spills the juice over Lakshmi. Malishka asks Lakshmi to go and clean the dress in the guest washroom. She tries to show Lakshmi that the latter is just a guest in the house. Lakshmi goes to the washroom to clean the dress, and comes across Rishi.

Rishi and Lakshmi collide and fall down. They get into a moment. He confesses his feelings to Lakshmi. He tells that he sees her everywhere, she is in his heart now. he adds that he knows well about her absence in the house, but whatever he does and feels is just for her. Malishka happens to pass by, and stops when she finds them together. Balwinder also reaches there and sees Rishi with Lakshmi.

Earlier in the show, Lakshmi asks Rishi the reason for the call. He invites her for dinner. She asks him who asked him to do so. He tells that he is saying this by himself. Malishka asks him to invite Lakshmi by Virender’s name. Rishi tells Lakshmi that even Virender wants her to come. He asks her to come once and meet the family. He convinces her. She agrees to come for dinner. He thanks her. He asks her to get her sisters along, then she would be comfortable. Malishka hugs Rishi and thanks him for agreeing to her. Rano waits for Balwinder. He makes an entry home to kidnap Shalu.

Rishi tells that until a good person comes in Lakshmi’s life, he will be there with her. He asks Malishka if she has any problem. She asks what would he do if she tells that she has a problem. He explains her. She tells that she still has Rishi with her, so she is thinking to apologize to Lakshmi. She makes Rishi invite Lakshmi and her sisters for dinner. Rano messages Balwinder that Lakshmi and her sisters have gone to Oberoi house for dinner, and he should come when she informs him about their return. Balwinder doesn’t get her message. He lands in the house to kidnap Shalu. Rano sees him and thinks he is a thief. She beats him in the darkness. She sees Balwinder when the lights get on.

He tells that he has come to kidnap Shalu. She tells that she has sent a message to him and informed him the change of time. Balwinder checks the message sent by her phone. He worries that she had sent the message to Lakshmi. She is shocked on realizing her blunder. On the contrary, Sonia welcomes Lakshmi, Shalu and Bani. She tells that she will just call Malishka. She drops the juice over Lakshmi’s clothes. She apologizes for the mistake. Malishka comes to offer help to Lakshmi. Rano and Balwinder worry that Lakshmi will know their plan. He tells the new plan that he will go to Oberoi house and steal Lakshmi’s phone before kidnapping Shalu. Rano fears that Lakshmi can call the police. He asks her to pray that Lakshmi doesn’t read her message. Balwinder leaves.

Malishka and Sonia try to steal Lakshmi’s phone to block Rishi’s number. Malishka sends Lakshmi to the guest washroom to clean her dress. She sits speaking to Shalu and Bani. Lakshmi meets Rishi in the room. They both fall down. They have a moment. He asks her what is she doing here. She reminds that he had invited for dinner. He asks what is she doing in the room. She tells that she came to clean her dress, and fell down when she collided with him, she thought he will hold her and balance but even he fell down. They get up and land into a moment. Balwinder finds them sharing an eyelock. He wants to steal Lakshmi’s phone. His friend asks him not to take risk. He asks Balwinder did he get jealous seeing Rishi and Lakshmi close.

Balwinder tells that he isn’t jealous, he is sure that Rishi will pay money because he can’t see Lakshmi’s tears. He wants his revenge on Rishi and Lakshmi. Malishka finds Rishi and Lakshmi close. She gets upset. She angrily throws things to get his attention. Rishi tells that his room shower wasn’t working, so he had come to the guest room. He leaves. Malishka thinks they had run like she caught them romancing. Lakshmi and Rishi think of each other. Rishi tells himself that he loves Malishka, but feels for Lakshmi. Lakshmi wonders why is she feeling so when she knows that Rishi loves Malishka. Bani and Shalu find it odd that they are invited for dinner, but the family isn’t there to attend them. They ask the servant about the family members. He tells that the family isn’t at home.

Shalu tells that Karishma, Sonia and Malishka dislike Lakshmi, and they have invited her. Neha also joins them for dinner. She tells that she has come because she is also Lakshmi’s sister. She has come there just to save Rano. She looks for Lakshmi. Bani tells that Lakshmi has gone to clean her dress. Neha thinks something is going on against Lakshmi. Malishka and Sonia block Rishi and Lakshmi’s numbers in both their phones.

Reviewed Rating for Bhagya Lakshmi 10th March 2022 Written Update Lakshmi returns: 5/5 This rating is solely based on the opinion of the writer. You may post your own take on the show in the comment section below.