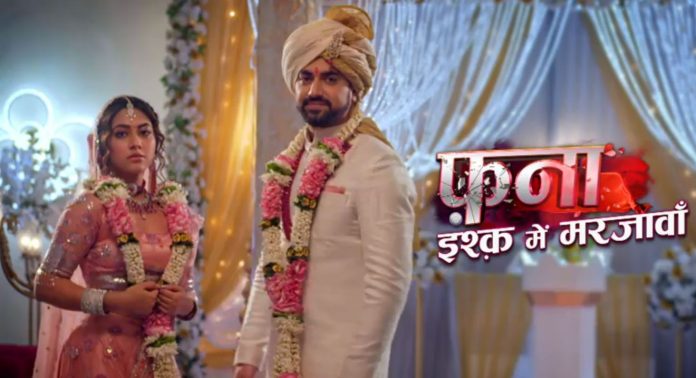 Pakhi assures Agastya that she is comfortable. After confirming Pakhi’s comfort once again, Agastya lies down on the bed. Pakhi falls asleep. Agastya gets shocked and scared on receiving a message. Next morning, Agastya surprises Pakhi by bringing all her favorite snacks from all parts of delhi. Pakhi gets surprised seeing this. She asks Agastya why he brought so much food for her. Pakhi tells Agastya that she can’t eat all this alone. Agastya tells Pakhi that he brought all this to cheer her up. Suddenly, Pakhi receives news about Ishaan. The news reads that police are waiting for Ishaan to get fine and get to know the actual truth behind the kidney racket. Agastya snatches the phone from Pakhi.

He gets angry reading such news and seeing Pakhi again worried about Ishaan. He thinks that Pakhi can’t worry or think about Ishaan as she is officially his now. He holds Pakhi’s hand tightly. This shocks Pakhi. Pakhi asks Agastya to leave her hand as it’s paining her. Neelima sees Agastya angry and knocks on his bedroom door. Agastya gets back to his senses. Neelima takes Agastya outside asking Pakhi to freshen up. She tells Agastya that he can’t hold Pakhi’s hand tightly like this. Agastya tells Neelima that he can’t tolerate seeing Pakhi still thinking or worrying about Ishaan. He tells Neelima that last night Pakhi was happy and allowed him to share bed with her.

Agastya also tells Neelima that Pakhi got upset again reading the news about Ishaan. Neelima advises Agastya to give some to Pakhi as old relationships take time to get ousted from heart. Agastya agrees to give time to Pakhi. Later Neelima is seen asking Pakhi to accompany her for shopping. Pakhi apologizes to Neelima and tells her that she has to go to sector 24 to restart her event management work. Neelima tells Pakhi that it’s commendable that she is starting her work again after suffering a lot. She asks Pakhi to go. Agastya stops Pakhi from leaving. He tells her that she can’t go. Pakhi asks Agastya what happened and why he suddenly changed his decision as he didn’t show any objection in their earlier discussion about work.

Agastya says he likes Neelima’s idea and won’t mind wealth coming to him. He also tells Pakhi that this way he would be able to keep an eye on her for her safety and won’t get worried. Neelima reminds Pakhi that she already told her that everything that belongs to Agastya belongs to her too now, even Agastya’s office. Neelima gets happy and says both Pakhi and Agastya’s office will be the same now and they remain together always. Agastya feels happy with this. Pakhi gets convinced and leaves with Agastya for work and office. At the hospital, Yug grabs a ward boy’s collar and asks him about the whereabouts of the nurse that Agastya hired for Ishaan. Ward says he doesn’t know. At the police station, Virat says Agastya tries to be everyone’s god. He asks Ishaan’s nurse what Agastya is doing with Ishaan.

Nurse gets shocked and scared with Virat’s doubt on Agastya. She cries and tells Virat that she doesn’t know anything as she is only hired for Ishaan’s upkeep (care). On the other hand, Pakhi and Agastya reach the latter’s office. Agastya shows Pakhi the space and new cabin he got set up (organized) for her. Pakhi likes the office and says it gives her home vibes. She tells Agastya that she would have felt good if Tanya would have been with her.

Pakhi says she doesn’t know where Tanya disappeared suddenly. This shocks Agastya. He asks Pakhi to not worry as he will try to search Tanya for any information about her. Pakhi tells Agastya that she would feel awkward working in the cabin adjoining his cabin. Agastya tells Pakhi that he will get a new cabin made for her in some time and asks Pakhi to manage her work from this cabin till then.

They continue their conversation. Agastya asks Pakhi to help him in finding a good birthday gift for Naveli. He says he wants to apologize to Naveli and make her happy with a beautiful birthday present. Pakhi asks Agastya why he didn’t tell her earlier that it’s Naveli’s birthday today. Agastya tells Pakhi that Naveli usually celebrates her birthday according to her wish with her friends, not with family. Pakhi tells Agastya that she wants to organize a cool and wonderful party for Naveli at home. Agastya allows Pakhi. After some time, Pakhi is seen busy with her work in her new cabin. Agastya is seen staring at Pakhi from his cabin.

In the late evening, Pakhi is seen decorating the whole house for Naveli’s birthday party. Neelima praises the decoration done by Pakhi. Pakhi tells Neelima that it’s her profession too and wants to use her expertise for Naveli too. She walks towards the basement to look for decoration lights but her phone falls down. She tries to search for her phone on the floor. Someone once again passes from behind her. Pakhi feels sacred. Agastya comes and scares Pakhi more. Pakhi screams in fear and Agastya laughs teasing her.

He asks Pakhi what she was doing in the basement. Pakhi replies to Agastya that she came to look for decoration lights. Agastya reminds Pakhi that he has hired servants for these types of works and she should have asked them to do all this. He takes Pakhi outside of the basement with him and thinks that he won’t ever let Pakhi reach the secret hidden behind the basement door. In the next episode, Virat will reach Raichand house where Naveli’s birthday party will be going on. He will accuse Agastya of trying to kill Ishaan and will try to arrest him.

Reviewed Rating for Fanaa 9th March 2022 Written Update Agastya in trouble: 3/5 This rating is solely based on the opinion of the writer. You may post your own take on the show in the comment section below.