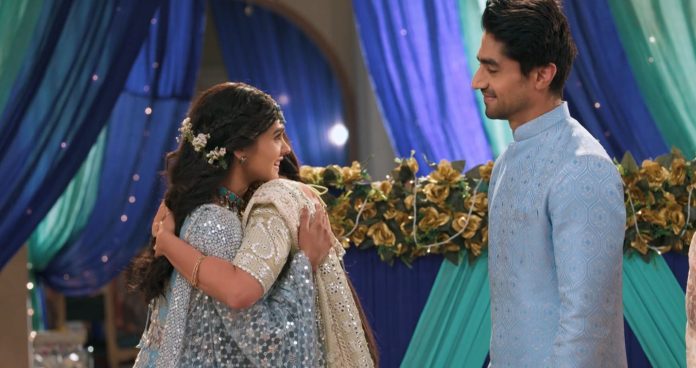 Yeh Rishta 10th March 2022 Written Update Joyful celebrations Abhimanyu goes downstairs asking Akshara to come soon. Akshara gets shy. Aarohi is seen asking waiters to take snacks outside for guests. Manish comes and caresses upset Aarohi. He also hugs Aarohi to comfort her. Aarohi thanks Manish. She tells him that she understood what he wanted to say to her. Aarohi asks Manish if everyone from the family is with her. Manish signs yes. Aarohi says let’s start Akshara’s tilak. At Birla house, Harshvardhan is seen cranky. He waits for Tilak Ceremony’s photographs to get uploaded. Harshvardhan says everyone has forgotten him and nobody cares about his condition.

He thinks Abhimanyu didn’t even try to convince him. Harshvardhan also thinks that he would probably have attended the Tilak Ceremony if Abhimanyu would have convinced him honestly. At Goenka house everyone feels happy thinking that finally both families are getting united and nothing is going wrong. Aarohi brings Akshara downstairs, Abhimanyu gets lost in her. He thinks he loses his breath every time he sees Akshara. Neil closes Abhimanyu’s eyes. Aarohi recalls Akshara bringing her downstairs at her tilak ceremony and feels angry.

Manjiri puts a kala teeka behind Akshara’s ears to ward off the evil eye from her and praises her beauty. Akshara touches Manjiri’s feet and the latter blesses the former. Seeing Aarohi angry and sad, Neil asks her to smile sometimes as it’s free. Aarohi asks Neil to mind his own business and says that it’s her wish that she doesn’t want to smile. She also asks Neil why she should listen to him? Neil says okay. Suhasini asks Aarohi why she brought Akshara downstairs right now when she told her that she has to perform a ritual in Akshara’s absence. Aarohi apologizes to Suhasini saying that she forgot.

Suhasini says she has to ward off evil eyes from Abhimanyu and Akshara is not allowed to see it as per the ritual. She asks Akshara to go inside for 15 minutes. Akshara and Abhimanyu together say no please. Everyone laughs seeing Abhimanyu and Akshara yearning for each other. Akhilesh says Akshara and Abhimanyu can’t remain without each other. Suhasini says Akshara has to go inside as they have to fulfill this traditional ritual. Abhimanyu requests Suhasini to leave the ritual as he won’t get caught by anyone’s evil eye. Manish tells Abhimanyu that whether it’s surgery or wedding, all procedures must be followed for the safety.

He convinces both Abhimanyu and Akshara and sends Akshara inside. Akshara turns to see Abhimanyu and wards off the evil from everyone’s happiness. She prays to god that everything should go fine in future too. Suhasini says she forgot that a Kalawa needs to be tied in the groom’s father’s wrist in this ritual. This shocks and worries everyone. Akshara overhears everything. She secretly reaches Birla house. Harshvardhan gets shocked seeing Akshara and asks her why she came to Birla house. He asks Akshara to return where she needs to be. Akshara tells Harshvardhan that she came to take him as her and Abhimanyu’s Tilak Ceremony is incomplete.

Akshara asks Harshvardhan to take revenge from her and requests him to not refuse to bless her and Abhimanyu. Harshvardhan asks Akshara to not lecture him as even now Abhimanyu would be looking for. He tells Akshara that Abhimanyu doesn’t care about his father’s blessings but cares only for her. Harshvardhan asks Akshara to return and keep Abhimanyu happy. He angrily requests Akshara to leave. At Goenka Mansion, Suhasini completes the traditional ritual with Abhimanyu. She asks Kairav, Vansh and Aarohi to bring Akshara downstairs as she must also be impatient. Akshara comes from outside and stops Kairav. She says she is here. Everyone gets shocked and worried seeing Akshara coming from outside and teary eyed.

Abhimanyu runs to Akshara and asks her where she is coming from. Akshara cries and tells Abhimanyu that for the last time she went to try. Worried Abhimanyu asks Akshara what she went to try for the last time. Akshara blasts a party pooper and smiles. Harshvardhan enters Goenka Mansion. “Apno ka saaya ho jahaan”, plays in the background. Everyone sees Harshvardhan with mixed expressions of shock, surprise and teary eyes. Akshara jumps in joy and tells Abhimanyu that his father finally came to bless them. She says now their family is complete. Manjiri thanks Akshara and runs to Harshvardhan. Abhimanyu thanks Akshara seeing Manjiri happy.

Flashback shows Akshara explaining to Harshvardhan that Abhimanyu’s happiness is in Manjiri, Manjiri’s happiness is in him and his happiness lies in both Abhimanyu and Manjiri’s happiness. She says all relationships are tied in one thread. Akshara calls Harshvardhan, “Papa” and requests him to come with her. Harshvardhan gets shocked hearing “Papa” from Akshara. In a low voice, Manish tells Akhilesh that he doesn’t know if he should be happy or sad with Harshvardhan’s entry. He says what was the need for such a dramatic entry. In a lower voice, Akhilesh says he hopes no issues get created. In a lower voice, Harshvardhan tells Manjiri that he hasn’t forgiven everyone till now. He says he came because he doesn’t want Birlas to get slandered.

Through eye interaction, Abhimanyu reminds Akshara that his stitching fee is still due. Akshara gets shy understanding what Abhimanyu wanted to say. Manish thanks Harshvardhan for coming. He tells Harshvardhan that ritual and ceremonies would have been left incomplete without him. Harshvardhan clears Manish that he came for Abhimanyu’s happiness only. He says he doesn’t care about anyone else’s feelings. This makes Manish feel angry. Neil and Parth announce a game before the Tilak Ceremony. Harshvardhan says games aren’t important as everyone has work to do after the Tilak Ceremony. Abhimanyu asks Parth to make Harshvardhan understand that nothing is more important than son’s wedding.

He says there won’t be fun without games at weddings. Harshvardhan gets convinced when Aarohi says games are played at weddings only, nowhere else. Harshvardhan asks to speed up everything. Manish wonders what is the issue with Harshvardhan as he always remains in the cranky attitude. Akhilesh says it’s good that Harshvardhan at least came. Neil explains that in the game, Abhimanyu and Akshara will have to compete with each other. He calls them Bhai and Bhaabi. Abhimanyu says he doesn’t want to fight. Akshara says they will play as planned as she will get happy in defeating Abhimanyu. She says Abhimanyu is scared of losing. Abhimanyu gets convinced to play.

Reviewed Rating for Yeh Rishta 10th March 2022 Written Update Joyful celebrations: 3/5 This rating is solely based on the opinion of the writer. You may post your own take on the show in the comment section below.