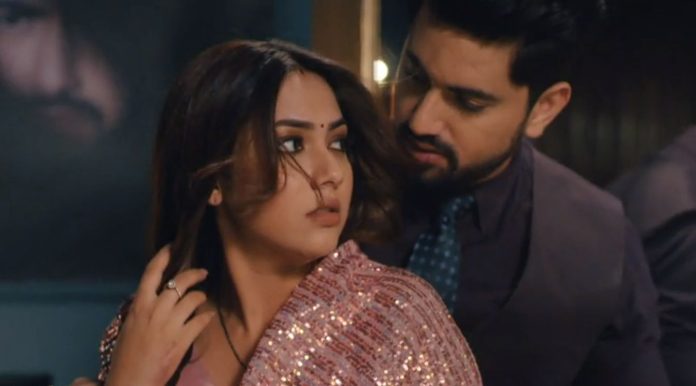 She opens the cupboard and the threatening notes fall down. Pakhi fails to see them and takes the lawyer’s contact card and walks outside. She collides with a tense Naveli and asks her what happened. Naveli leaves without saying anything. At the police station, Virat enquires Maya (a nurse he hired for Ishaan’s treatment). He tries to break Maya into confessing the truth, but fails. So to get the truth out of Agastya, he lies that Maya has told the whole truth to him. Agastya looks at Maya and wonders if she really said something. Virat tells Agastya to tell him the truth soon, otherwise, he may get into some trouble. Agastya remains quiet. Virat goes outside the interrogation room. Pandey asks Virat why he lied to Aagstya as Maya didn’t tell them anything.

Virat tells Pandey that he lied to Agastya to make him confess the truth. Pakhi comes to the police station with Agastya’s lawyer. Pakhi tells Virat that he can’t keep her husband for no offense. Agastya gets surprised and happy hearing Pakhi calling him her husband. Virat doesn’t hear Pakhi’s words and sees Agastya’s happy expressions. Pakhi finally gets Agastya and Maya released from prison. Virat has to let Agastya and Maya go free because of lack of proof. Pakhi asks Agastya to leave and she will complete all paperwork and formalities. When Agastya shows reluctance, Pakhi convinces him to go outside.

Agastya gives Virat a smirkingly anr victory glare before leaving. Outside the police station Agastya scolds Yug on call for letting Virat arrest Maya and almost reaching their truth. He also asks Yug to give paralysis injection to Ishaan as he may get conscious in Maya’s absence. Later, Pakhi and Agastya return home. Agastya asks Neelima if she is fine now as Pakhi told him about her injury. He also asks Neelima if the doctor came and examined her. Neelima caresses Agastya and tells him that she is fine. She also tells Agastya that she is very happy that he returned home safely. Neelima says she knows her grandson Agastya can’t do anything wrong. Pakhi asks Agastya why he got Ishaan transferred to his own medical facility.

Agastya tells Pakhi that he got Ishaan admitted to his own medical facility because being considered criminal, no doctor or hospital was ready to treat him. Agastya asks Neelima if Naveli is upset that her birthday party got ruined. Neelima tells Agastya that Naveli is in her room. Agastya says he will talk to Naveli later on. Both Pakhi and Agastya go to freshen up. On the other hand, Naveli is seen at Shady place. She is also seen apologizing to someone and requesting some time to pay their money. At the same time, Shanaya is seen passing from nearby in an auto. She wonders why Naveli is standing in such a shady place.

Shanaya walks towards Naveli. Naveli sees Shanaya coming and moves towards her. Shanaya wishes Happy Birthday to Naveli and asks her what she is doing here at night. Naveli stutters and hears the temple bell. She lies to Shanaya that she came to the temple to take God’s blessings. Naveli tells Shanya that Neelima told her that it’s good to take God’s blessings on own birthday. She makes an excuse and leaves. Shanya also reaches home and wonders if she should tell Pakhi about it. At Raichand house, Pakhi is seen recalling Virat’s words. Flashback shows Virat telling Pakhi that Agastya was making his staff give wrong medicines to Ishaan to kill him.

Virat tells Pakhi that Ishaan may be a criminal but is a human being too and it’s their duty to save a human life. Pakhi refuses to believe Virat and his allegations/accusations against Agastya. Virat tells Pakhi that he is sure that Agastya is a criminal and he will soon prove it. Flashback ends. Pakhi receives a call from Virat. She refuses to listen to anything from Virat, especially against Agastya. Virat tells Pakhi that he now shows her some proof to make her believe his words. Agastya reaches Pakhi, searching for her in the whole house. He asks Pakhi what she was doing. Pakhi replies that she wasn’t doing anything.

She says how can Virat doubt Agastya and consider him criminal. Agastya feels good hearing this. Pakhi leaves to get dinner ready on the dining table. Agastya dances and jumps in joy thinking that Pakhi does show but loves him actually. He says Neelima was right that he should give Pakhi some time to make her closer to him. Later, Pakhi starts serving dinner to Agastya but he stops her. He tells Pakhi that women should always not serve food. He says he will serve the fold today. Both of them eat from the same plate together. Aagastya starts serving food to Pakhi. On the other hand, Mona asks Naveli to help take out her necklace. Naveli helps Mona and asks her the cost of the necklace.

Mona, unaware of Naveli’s situation, tells her that her necklace costs near 4-5 lakhs. Naveli makes an excuse to sleep in her room and leaves Mona’s room. She calls her blackmailer and tells her that she can pay his/her first installment soon. After dinner, Shanaya calls Pakhi and tells her that she saw Naveli in sector 15’s shady place. She also tells Pakhi that Naveli looked tense and told her that she came to visit the temple. Shanaya says Naveli visiting a small temple in a shady place sounds weird and unexpected. Pakhi tells Shanaya that she will talk to Naveli. Both sisters say good night and disconnect the call. Pakhi again and again thinks that Agastya can’t be a criminal and that Virat was lying. She looks confused.

In the next episode, Virat will get Ishaan’s test done unofficially. The doctor will tell Virat that the reports are absolutely right. Virat will smirk seeing Ishaan’s reports and collect them. Pakhi will receive Virat’s message asking her to come to the address he sent her, if she wants to see the proof. Pakhi will get shocked on knowing that Virat actually got proof against Agastya.

Reviewed Rating for Fanaa 11th March 2022 Written Update Agastya exposed: 3/5 This rating is solely based on the opinion of the writer. You may post your own take on the show in the comment section below.