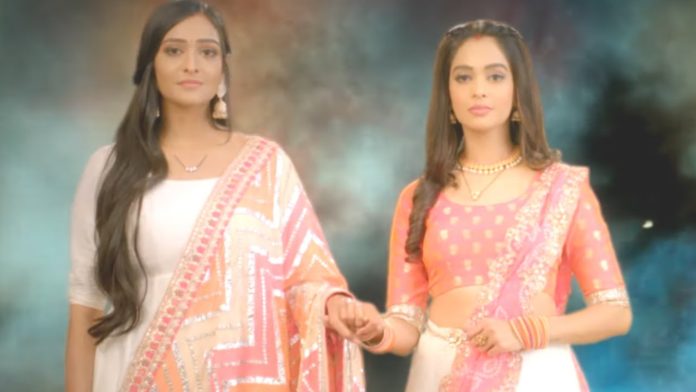 Bhagya Lakshmi 14th March 2022 Written Update Huge twist Balwinder meets his friend, who was after Shahana. The man tells about his new liking for a girl. Balwinder learns that Lakshmi slapped his friend. He wants to kidnap Lakshmi and play holi with her. Malishka takes the colours to apply to Rishi. She gets excited to play. She goes and applies holi to Rishi. Rishi takes the colours and runs after Malishka. He helps a servant. Lakshmi comes there in the party with Prachi. Rishi and Lakshmi collide. They get into a holi moment when the colours fall over them. Ranbir and Ayush find their chemistry of love. Ayush tells that Lakshmi is Rishi’s soul mate.

They find Rishi gaining his lost smile back. Rishi wishes Lakshmi again, and apologizes for Malishka’s odd behavior. Lakshmi asks him to go to Malishka. Rishi tells that its Holi, he will apply colours to her first. He romantically applies colours to her, without letting her go. Malishka gets angry seeing Lakshmi with Rishi again. Rishi enjoys his holi because of Lakshmi. Ayush applies the holi to Shahana. He tells Lakshmi that its their first holi and he is glad to see her. He applies the tilak to her.

Balwinder reaches the Holi party and finds Lakshmi. He gets revengeful against her. Malishka asks Rishi to apply Holi to her. She tells him that they are getting married. She wants to play Holi with him. She asks him to understand that he is just of her. Rishi asks her not to bring Lakshmi in between. She tells that Lakshmi still thinks that Rishi is her husband. She wants to clear the misunderstanding. Rishi asks her not to start it again. Balwinder wants to snatch Lakshmi from Rishi and take his revenge.

Malishka asks Rishi to play holi with her. He tells that he is with her only. She asks him when did he apply colours to her. He has no answer. He starts lying to her. Malishka tells that he was busy after Lakshmi. She gets disappointed with him. He applies her colours to calm her down. He wishes her happy Holi. She tells that they are going to get married. She asks him to know that he will become of her after their marriage, he won’t belong to Lakshmi. He asks her not to drag Lakshmi in between. He tells that Lakshmi is already hurt because of them. He calls it enough. He asks her to let Lakshmi enjoy the holi party. She tells that she has nothing to say.

Balwinder keeps an eye on Lakshmi. He follows her to apply the Holi colours. He hides when he sees Rishi coming. Rishi meets Lakshmi. He tells that she has come as a guest in someone’s house, but landed in the kitchen. She tells that she was going to make kada for Ranbir’s Dida. Rishi finds her very caring. Balwinder thinks Lakshmi is just of him. Rishi tells that Lakshmi wins everyone’s heart so easily, without taking sweetly. Rishi finds Lakshmi getting hurt. He cares for her like always.

Balwinder doesn’t want Rishi to get Lakshmi. He is ready to go to any extent to get Lakshmi. Rishi gets hurt. Lakshmi also cares for him. They get into a moment. Balwinder turns angry watching them. Ayush is glad to see Rishi and Lakshmi together. Rishi compliments Lakshmi. He tells that its his fault that he didn’t compliment her often. He tells that he will make her habitual to compliments. Ayush lies that he was tying the shoe lace. They catch his lie. Ayush manages to make excuse. He teases Rishi. He asks Rishi to praise his brother also. Rishi asks him to do some good work first. Balwinder wants to apply colours to Lakshmi secretly. He tells that Rishi is always with Lakshmi. He thinks he will pretend to apologize to Lakshmi and convince her for marriage. He dreams of his marriage. He plans to kidnap Lakshmi. Rhea overhears his planning.

Reviewed Rating for Bhagya Lakshmi 14th March 2022 Written Update Huge twist: 3/5 This rating is solely based on the opinion of the writer. You may post your own take on the show in the comment section below.