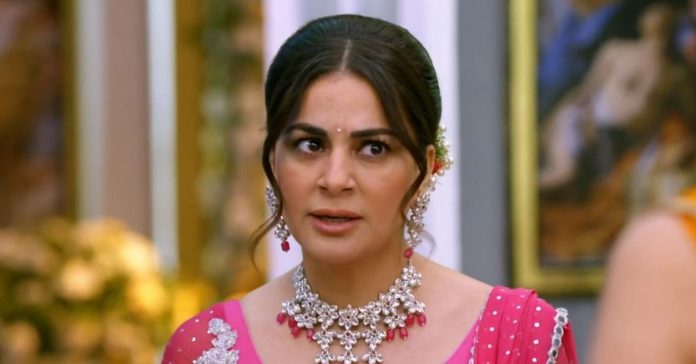 Kundali Bhagya Preeta misses Rishabh 14th March 2022 Prithvi tells Sherlyn that he won and Preeta lost, Preeta wanted to get the judge to the party to get Mahesh declared stabled, she wanted to bring Mahesh into the family, but he has thrown Mahesh to the basement again. He asks her to give tissues to Preeta to wipe her tears. Biji also encourages Preeta. She tells that things will get fine. She pretends in front of Sameer. He tells her that he knows the real story. Biji tells that maybe Shrishti told the truth to Sameer. Preeta tells that Sameer always supports them, but she didn’t tell him anything on her own, because he supported Karan two years back. Shrishti tells that Sameer didn’t trust them two years back, he can’t be trusted again.

Biji asks them to patch up and forget the fights. Preeta tells that anyone will know their motives on hearing their conversation. She asks Biji to take Shrishti home. Sameer offers lift. Shrishti refuses to him. Biji asks Preeta to not get afraid and fight until she wins. Preeta tells that she has no one else than Shrishti. She sends her family home. Meanwhile, Sherlyn tells that Prithvi would need the tissues more than Preeta. He tells that he will always defeat Preeta. She tells that his thinking is too less, she meant to say that he would get tears of happiness. He tells that he is happy to cry with joy. He pities Preeta.

He makes a drink to celebrate. He tells that Preeta doesn’t know who helped him in the game this time. He reveals that he could do so by taking help from a family member. She asks him who helped him. He tells that it’s a top secret, he would not name the person, but she can guess it. He tells that Preeta was dancing with attitude, and then she had to break into tears. He dances with Sherlyn. Preeta makes an entry in the room, and catches them. She tells them that she will soon oust both of them of the house.

She asks Prithvi to underestimate her. She confronts Sherlyn about her lie that she will be loyal to Rishabh. She tells that she was foolish to expect Sherlyn to change. Prithvi reminds that Preeta has lost. He tells her that it’s the truth that he loves Sherlyn a lot, and even Sherlyn loves him, they can’t live without each other. Preeta rebukes Sherlyn for playing with everyone’s emotions. Prithvi tells that Sherlyn and his relation is evergreen and strong, not like Karan and Preeta, who keep getting separating.

Preeta asks them not to compare their illegitimate affair with her legalized marriage with Karan. She calls her relation pure and respectful, unlike their relation, which is a fraud. She feels ashamed to stay with them under the same roof. He asks her why is she emotional about Luthras. Preeta tells that she respects Rishabh, she doesn’t hate him, even he gave her much respect. She feels she did a big mistake to get Rishabh married to a wrong girl. She misses Rishabh in the family who could have saved Mahesh and balanced the family, by protecting them from evil Prithvi.

Reviewed Rating for Kundali Bhagya Preeta misses Rishabh 14th March 2022: 4/5 This rating is solely based on the opinion of the writer. You may post your own take on the show in the comment section below.