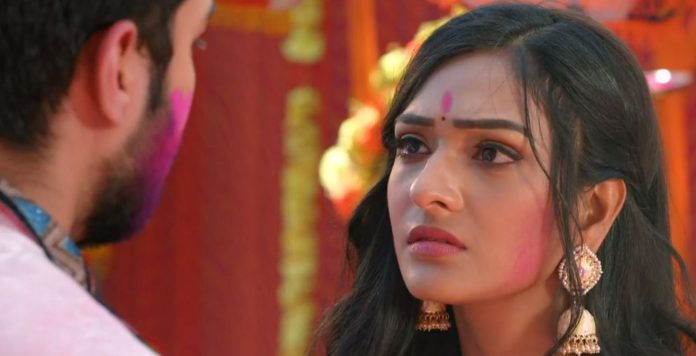 Bhagya Lakshmi 18th March 2022 Written Update Stirring twist Neelam hears Malishka being troubled by Lakshmi’s actions. She asks Malishka not to worry, its Lakshmi’s plan to make a re-entry in the house, she would have realized her mistake and might be acting helpless in front of Rishi to make him feel guilty. She tells that Lakshmi wants to come back in his life, if she succeeds, then Malishka would be at fault. She asks Malishka to stop Lakshmi from succeeding. Malishka understands Neelam. She tells that she will stay around Rishi and stop Lakshmi from reaching him. She tells Sonia that she has a plan, she knows what to do now. Rishi gets thinking about Lakshmi.

Balwinder sees him, and hides Shalu who tries to reach out to Rishi. Rishi doesn’t see Shalu. He goes home and tells Neelam that he missed her a lot in the party. She asks him if he had anything. He tells that he is really hungry. She asks him to sit and have food first. She worries for him. He tells that she doesn’t need to worry for him. She pampers him with love. She tells that its her love for him that she finds peace. She can’t express it to him. He tells that he doesn’t want to create problems and stress her. She tells that she loves him the most, so she gets angry on him. Malishka knows that he loves Neelam a lot and would never refuse to her. Rishi likes the food.

Malishka asks him if he is fine that Neelam is feeding him the food. She tells that Rishi and Balwinder had a big fight, Rishi fought to save Lakshmi, he had risked his life. Neelam asks Rishi is it true. Rishi asks Malishka to stop it. Neelam asks him why did he take risk, he could have called the police. She gets stressed again. She is upset that he risked his life for Lakshmi’s sake. she asks him to not say anything. Rishi gets away. Malishka wants Rishi to suffer, if he doesn’t change his mind.

Balwinder kidnaps Shalu and takes her to some place. Rano calls him and asks him if he has taken Shalu. She advises him to make a 50 lakhs ransom. She tells that Lakshmi will ask Rishi for help and get the money. Balwinder asks Rano not to reach him everything. Rishi asks Malishka why did she make Neelam tensed by revealing about the fight. Malishka tells that even she is tensed. He knows what she was trying to do and why. He tells that she is upset, she has no concern for him. She tells that he risked his life and saved Lakshmi, he forgot her at the event. She is hurt because of him. He calls it enough. He asks her not to repeat it, he isn’t feeling sorry that he played the holi with Lakshmi.

He tells that he will not leave Balwinder if he hurts Lakshmi. He tells her that he got shot to save her life, he wants to protect her too. He tells that she is making him away from her. He asks her to stop this behavior, else it won’t be good for them. She asks if he is saying this because of Lakshmi. He asks her to stop dragging Lakshmi, if their relation breaks, then just they will be responsible. She tells him that Lakshmi doesn’t want to see his face, she has blocked his number. He is shocked. Lakshmi and Bani look for Shalu. Rano tells that Shalu will come. She asks Lakshmi to make tea for her. Malishka tells Sonia that Lakshmi is spoiling Rishi and her relation.

She cries telling Sonia what Rishi warned her. She feels she is getting tortured by Lakshmi’s intervention in her relation. She tells that Rishi loves Lakshmi and will go to her. Ahana asks Malishka to leave Rishi, when there is no love in their relation. Malishka gets angry on her. She tells that Rishi is his life. Sonia calls Neelam there. Malishka hugs Neelam and cries. Neelam asks the matter. Malishka faints down. Neelam asks Sonia to call the doctor quickly. Rishi misses Lakshmi. He tells that Lakshmi is not dual faced. He doesn’t think Lakshmi can block his number. He calls her to ask how is she feeling. He is shocked to realize that his number is blocked by her.

Reviewed Rating for Bhagya Lakshmi 18th March 2022 Written Update Stirring twist: 4/5 This rating is solely based on the opinion of the writer. You may post your own take on the show in the comment section below.