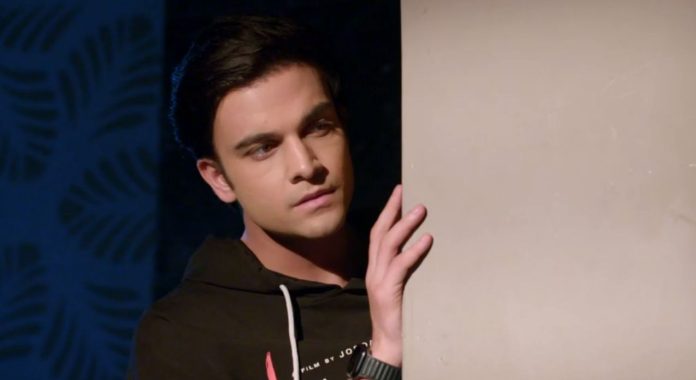 Kumkum Bhagya 21st March 2022 Written Update Ranbir next move Prachi gets angered that the fan isn’t working well, even AC is gone for servicing. Shahana asks her to sleep in her room. Prachi refuses. Ranbir reaches there and hears the problem. He asks Prachi to sleep in his room. She taunts him that he would be going to spend the night in Rhea’s room. He tells that he is going to work all night in his study, he is going to sleep in the study room itself. Ranbir and Prachi argue a lot. Shahana asks them to talk directly and not involve her. She also offers her room to Prachi. Prachi doesn’t leave her room. She finally leaves her room to get a good sleep. She reaches Ranbir’s room. Ranbir is still in his room.

He finds Prachi coming inside the room to sleep. He hides from her. She doesn’t want anyone to see her and question her. She puts an alarm to wake up soon and go back to her room. He feels love for Prachi. Later, Ranbir finds Rhea’s cupboard left open. He thinks to check it for any clue. He opens the cupboard and looks for any possible thing that could be a hint. Rhea catches him and asks him what is he doing in her room. She tells him that whatever she does, he always doubts her, but this time he has given her a chance to doubt him. Ranbir gets worried when she confronts him. Will Ranbir find out any clue about that night’s conspiracy? Keep reading.

Earlier in the show, Aaliya tells Rhea that one drink has the power to separate two lovers. Rhea asks her if they can’t use the idea once again. Shahana overhears them. Aaliya and Rhea catch her and ask her if she is eavesdropping on Prachi’s saying. Shahana tells that she came to ask if they want any cool drinks. Rhea tells that Shahana is up to something. Aaliya asks her to focus on Ranbir and not worry for anything else. Preeti asks the cook to make coffee for Rhea. Ranbir reaches the staff to know about the bhaang drinks. The servant tells him that Aaliya was feeding the thandai to everyone, he should ask her about the bhaang. Ranbir remembers that he had taken the thandai from Aaliya’s hand. He thinks Aaliya can’t do this with him, but she can do anything for Rhea.

Ranbir wishes that their room had become their small world, where nobody intervened between them. He prays for Prachi’s happiness. He feels his dream world will be for one night, Prachi will wake up in the morning and leave. He sits watching Prachi sleep. He feels he loves her a lot, but she hurts him the most. He wishes that she just pretends to love him and gives him a reason to pass his life. He cries recalling their happy times which he misses a lost. He feels sleepy. He doesn’t want Prachi to see him sleeping in the room. He thinks to switch off her alarm and make her sleep peacefully. He puts off the alarm. He turns caring towards Prachi.

He wishes Prachi was with him like before. He goes to sleep in the washroom, just to not come into her sight. Ranbir wakes up in the morning and goes to check if Prachi is still in the room or left. He feels backache. He finds Prachi still sleeping. He silently leaves from the room. He tells that they are sleeping separately today, but very soon they will be sleeping together and united. He decides to prove his innocence to Prachi and win her love back. He goes to Rhea’s room to search for any evidence.

Prachi wakes up and gets to see Ranbir’s picture. She checks the time. She wonders how didn’t the alarm ring. She finds the door open. She wonders how didn’t the alarm ring and who opened the door. She thinks if Ranbir had come to his room. Rhea asks Ranbir what is he hiding. Ranbir asks her to become a lawyer. He tells that the shirt is really important to him, because its gifted by Pallavi. He describes the shirt and asks her to help him find it. He asks her how can she doubt him, he just came to check her cupboard if the servant kept his clothes in her room by mistake. He tells that he is upset that she doubted him. She tells that she was joking. He makes a leave. She knows that he is innocent and can’t lie. She understands that he came for some another work, than finding his shirt. Shahana asks the cook to make special food for Prachi. Dida asks Shahana if Prachi’s diet has changed. Shahana doesn’t tell that Prachi has to eat well for the sake of the baby. Dida asks her to cook something for Prachi herself. She enquires about Preeti. The servant tells about Preeti’s boyfriend getting arrested. He asks Dida to explain Preeti to stay away from Manik, who is arrested for theft. Aaliya overhears them and laughs that Dida and Shahana will make Preeti’s life better as well. Shahana tells Dida that she has to tell her something.

Reviewed Rating for Kumkum Bhagya 21st March 2022 Written Update Ranbir next move: 4/5 This rating is solely based on the opinion of the writer. You may post your own take on the show in the comment section below.