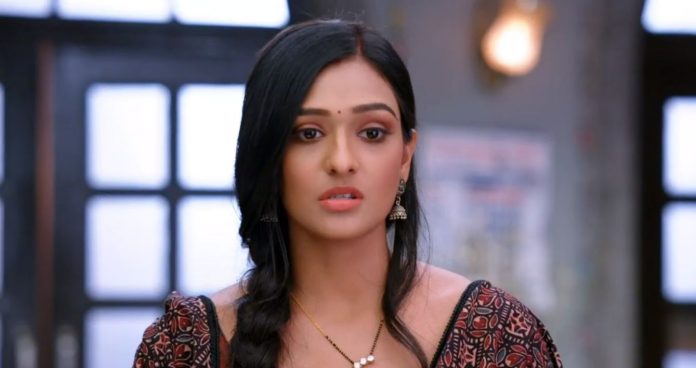 Bhagya Lakshmi 21st March 2022 Written Update New track Rishi asks Ayush to know that Lakshmi has blocked his number. Ayush can’t believe this. He tells that Lakshmi can never do this. He asks how can Lakshmi block him. Rishi calls Lakshmi again and proved it. Ayush tells that he will call Shalu and make him talk to Lakshmi. Virender meets them and asks why is Neelam so angry. He tells that he got scared seeing Neelam so hyper and came to ask them. Ayush jokes that Neelam was hyper because of Rishi and Malishka. Rishi asks them not to joke on Neelam. Virender knows that Neelam and Rishi love each other a lot. He tells Ayush that Neelam was always afraid for Rishi’s life, Neelam loves Rishi the most, because of the fear of losing him.

He knows why Rishi loves Neelam so much. Rishi defends Neelam who always wants good for him. Virender wants Neelam to know what’s good for Rishi. Balwinder and his friends have kidnapped Shalu. She threatens them about Lakshmi, who will not spare them if he finds out that they kidnapped her. Lakshmi gets worried for Shalu. She tells Pritam that she is worried, Shalu didn’t return home till now. Pritam tells her that Shalu would be playing holi. He asks her not to worry. On the other hand, Neelam worries for Malishka when the doctor tells that Malishka is taking a lot of mental stress. He asks Neelam to talk to Malishka about the stress cause and try to sort it, else it will harm Malishka’s health.

Lakshmi looks for Shalu. Kiran meets Malishka and finds her stressed. She learns about the stress attack. She asks Malishka what’s the reason. Sonia tells them that Lakshmi is the reason for Malishka’s stress, Rishi is still favoring Lakshmi over Malihka. Neelam asks Ahana if anything happened before Malishka fainted. Ahana tells that Malishka was tensed because of Rishi. Sonia tells that Lakshmi is the root of all their problems. Lakshmi gets Shalu’s phone in the room. She tells that she is scared for Shalu. Rano asks why didn’t Shalu come back home after playing holi. She asks Lakshmi not to defend her sister. Pritam angrily leaves the food. He tells that he will go and look for Shalu. Rano tries to stop Pritam.

Lakshmi and Bani tell that Shalu isn’t irresponsible. Rano and Neha also accompany them in the search. Kiran asks Neelam what does Lakshmi want. Malishka tells that Lakshmi is always there between Rishi and her. Neelam summons Rishi for a talk. Rishi thinks of Lakshmi and finds peace. Ayush learns that Rishi was dreaming about Lakshmi. He pulls Rishi’s leg. Rishi asks Ayush to leave from his room. Sonia comes there to call Rishi. She finds them fighting. She tells Rishi that Neelam has called Rishi. Lakshmi starts searching for Shalu. Balwinder tells Rano that very soon, they will get a good news. Rano doesn’t want the police drama. He tells that Lakshmi will get the ransom call, police will not help her, she will cry and lose her senses in tension.

Lakshmi and Pritam tell Rano that they have to go to the police station. Rano and Neha lie to him. Rano tells that she will call Guddu, who can help them in the search. Pritam gets puzzled. Rano calls Guddu and asks him to come along. Neelam tells Karishma that Rishi will understand when he learns the entire matter. Rishi meets her. She tells him that she has tackled a matter. She asks him if he was buying jewellery with Malishka for their marriage.

She asks him if he is so desperate to marry that he didn’t tell his mom. She adds that she is with him, he doesn’t need to hide anything from her. She values his happiness over everything. She tells that she accepts Rishi and Malishka’s marriage and will inform Kiran as well. She asks Rishi not to mention Lakshmi’s name. She tells him that Malishka got a panic attack and fainted because of Lakshmi, the doctor said that she can’t handle stress. She asks him why did he tell Malishka that their relation can break. Rishi tells that Malishka doesn’t trust him. Karishma tells that Kiran is coming after giving medicines to Malishka. Neelam tells that Malishka has trust issues, maybe they are rushing with it.

Rishi asks her not to rush with the marriage. Karishma tells that Malishka knows their bonding, she knows that Rishi will never accept Lakshmi on knowing that the latter insulted his mom. She reveals to Rishi that Lakshmi has insulted Neelam a lot. Rishi asks when did this happen. Neelam tells that she didn’t want to tell him about it. Rishi asks Karishma what did Lakshmi say. Karishma tells that Neelam has begged Lakshmi to come with her to save Rishi’s life, but Lakshmi ousted Neelam from her house. She reveal that Neelam has cried a lot after returning to the hospital.

Neelam finishes a call and comes back to Rishi. Rishi sadly hugs Neelam. He feels guilty. He tells Neelam that he is feeling terrible, he is sorry to know that. Karishma tells Neelam that Lakshmi loves her sisters and didn’t come to Rishi for their sake, this truth has hurt Rishi. Lakshmi and Pritam file the missing complaint to find Shalu. Lakshmi asks Inspector to find Shalu. Inspector tells that he can’t help them until 24 hours, they should go home and wait for Shalu’s return. Lakshmi requests him to find her sister. He tells that maybe Shalu has run away with her lover. Lakshmi defends her sister. She reminds his duty to help the people. She gets into an argument with the Inspector. He asks her to get out.

Pritam tells that they are really worried. He apologizes. Lakshmi sheds tears. She tells that she will find her sister on her own. Ahana tells Ayush that Malishka is panicking about Rishi. Karishma asks Ahana what does he expect. She tells that Malishka I heartbroken because of Lakshmi. Ayush tells that Lakshmi is heartbroken because of Malishka. He argues with Karishma while defending Lakshmi. She angrily raises a hand on him. She asks him to accept Malishka as Rishi’s wife, very soon Rishi and Malishka will be getting married. Ayush tells Ahana that Karishma and Neelam are different, Karishma is a selfish person. Balwinder is stressed about Guddu. Rano calls him.

She tells him that the police didn’t help Lakshmi. She reveals how Lakshmi lectured the Inspector. Balwinder tells he missed Lakshmi from his hands. Rano asks him not to be a lover boy and come to senses. She reminds that they kidnapped Shalu for the sake of money. She asks him to not chant Lakshmi’s name. Balwinder asks Guddu to drop Lakshmi home. Pritam tells Lakshmi that they had gone to the police to seek help, she fought with the Inspector and now they can’t get any help. He calms her down. He is worried for Shalu. Lakshmi tells that wrong is always wrong, and right is always right. She just wants to support the right.

Reviewed Rating for Bhagya Lakshmi 21st March 2022 Written Update New track: 4/5 This rating is solely based on the opinion of the writer. You may post your own take on the show in the comment section below.