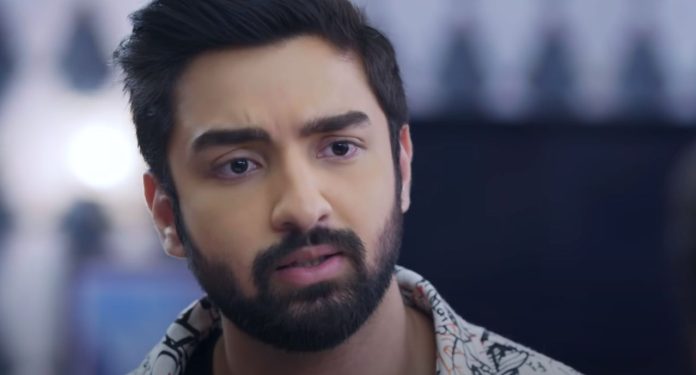 Bhagya Lakshmi 22nd March 2022 Written Update Rishi’s stand Lakshmi gets a huge shock when she learns about Shalu’s kidnapping. Balwinder and his friends have kidnapped Shalu. Balwinder demands a ransom of 50 lakhs. He asks Lakshmi to get 50 lakhs and then take her sister. Lakshmi is helpless. She reaches out to Neelam to take help. Neelam asks Lakshmi by what right did she come to ask for help. She tells that they don’t help strangers, but give just charity. She throws the money on Lakshmi’s face and pushes her out of the house. Malishka and Sonia also oust Lakshmi, when Rishi arrives home and holds stumbling Lakshmi. He supports Lakshmi.

He tells Neelam that Lakshmi isn’t a stranger for him, he will support her against anyone opposing her. he wants to stand by Lakshmi. He holds Lakshmi’s hand and takes her along. He tells Lakshmi that he will save Shalu from the kidnappers. Lakshmi tends to believe him. Rishi and Lakshmi leave from the Oberoi house in search of Shalu, while Neelam fumes that her son has gone against her for the sake of Lakshmi who humiliated her in the hour of need, when she went to beg Lakshmi for Rishi’s life. Neelam doesn’t forget Lakshmi’s cold behavior and holds a grudge against her. Rishi and Lakshmi come closer in these testing times.

Earlier in the show, Balwinder is stressed about Guddu. Rano calls him. She tells him that the police didn’t help Lakshmi. She reveals how Lakshmi lectured the Inspector. Balwinder tells he missed Lakshmi from his hands. Rano asks him not to be a lover boy and come to senses. She reminds that they kidnapped Shalu for the sake of money. She asks him to not chant Lakshmi’s name. Balwinder asks Guddu to drop Lakshmi home. Pritam tells Lakshmi that they had gone to the police to seek help, she fought with the Inspector and now they can’t get any help. He calms her down. He is worried for Shalu. Lakshmi tells that wrong is always wrong, and right is always right. She just wants to support the right.

Lakshmi tells Pritam that they are her dad’s pride. She doesn’t want to kill her esteem for anything. She asks Pritam is she saying wrong. He tells her that she is wrong, but they are helpless to find Shalu. Neha and Rano tell that nobody can help them. Lakshmi recalls Rishi’s promise. She tells them that Rishi can help her. Rishi recalls Lakshmi. He thinks she doesn’t want any troubles in her life, so she has blocked his number. He wants to not bother her and care for those who love him. He goes to see Malishka. Kiran asks him to administer the medicines to Malishka, who is getting rigid since some time.

Malishka cries while apologizing for her stupid behavior. She tells that she feels he is the same Rishi. She feels sorry that she fell weak. She tells that she couldn’t hold herself when he said about their possible breakup. She tells that she doesn’t want to show her weaknesses and tears to him. He consoles her and apologizes for hurting her sentiments. He asks her to take the medicines if she loves him. He advises her to not take his anger so seriously that she gets a panic attack again. She makes him promise that he will never leave her. Rishi gets hesitant to promise her, and deals with his inner conflicts.

He gets an urgent call, which saves him from Malishka. Malishka asks him if it was Lakshmi’s call. He tells that it was a business call. He leaves. She can’t help it. She tries to control her jealousy. Lakshmi tells Bani that Rishi’s phone isn’t reachable, the call is getting disconnected in one ring. Neha realizes that Rishi has blocked Lakshmi’s number. Karishma wants Neelam to hurry for Rishi and Malishka’s marriage. Neelam tells that she can promise to get them married, but not so urgently before the Markesh dosh ends. Karishma asks her if she will agree if pandit gives them a solution.

Guddu thinks Lakshmi can know about Shalu, but not about Rano, who is a backstabber. Pritam asks Lakshmi to not waste time and call Virender. Virender tells Neelam that Rishi isn’t the reason for Malishka’s fear. Neelam doesn’t understand him. She asks Karishma to call the pandit in the morning. Pritam asks Guddu to hire any taxi. Lakshmi calls Virender. Karishma finds Virender’s phone and disconnects it seeing Lakshmi’s name flashing on the screen. Neha tells Lakshmi that Rishi has blocked her. Lakshmi doesn’t believe her. Neha asks her to message Rishi and check it herself. Lakshmi confirms it by sending a message. She can’t believe that Rishi has blocked her number. She remembers his apologies and promises which appeared true to her.

Lakshmi cries thinking Rishi has not kept his word and distanced himself. Ayush asks Rishi how long will Malishka stay in their house. Rishi asks Ayush not to have any problem with Malishka. Ayush tells that Malishka is doing a drama to stay around him. Rishi tells that he is with Malishka, he is seeing her, but he knows that Ayush likes Lakshmi and favors her. He asks Ayush to know that Lakshmi doesn’t care for him, she has blocked his number. He feels Malishka has come to be with him because she cares for him. Malishka overhears their conversation.

She gets glad that Rishi is going to forget Lakshmi. Rishi tells that he thought Lakshmi wants to spend time with him, but the truth is, she doesn’t care for him, she doesn’t want to talk to him. Ayush tells that Malishka is lying. Rishi tells that Lakshmi has blocked his number. He has also heard that Lakshmi doesn’t love him. Ayush asks him to understand Lakshmi’s state of mind. Rishi doesn’t care for her, if she doesn’t value him. He wants to think of his family and mostly Neelam’s happiness first. Ayush asks him why is he talking about Neelam. Rishi doesn’t want to tell him anything. He loves and respects Neelam.

He tells that Malishka loves him the most, Lakshmi might be a good person, but she creates problems for Malishka and him. He decides to not let Lakshmi come between his relations. Ayush asks him to listen. He finds Malishka outside the door. She angrily walks away. Balwinder changes his voice and calls Lakshmi to shock her with the ransom call. Lakshmi is shocked to receive the kidnapper’s call. Balwinder threatens her on call. He demands a ransom of fifty lakhs. Lakshmi sheds tears in tension. Pritam and Rano pacify her. Stay tuned.

Reviewed Rating for Bhagya Lakshmi 22nd March 2022 Written Update Rishi’s stand: 4/5 This rating is solely based on the opinion of the writer. You may post your own take on the show in the comment section below.