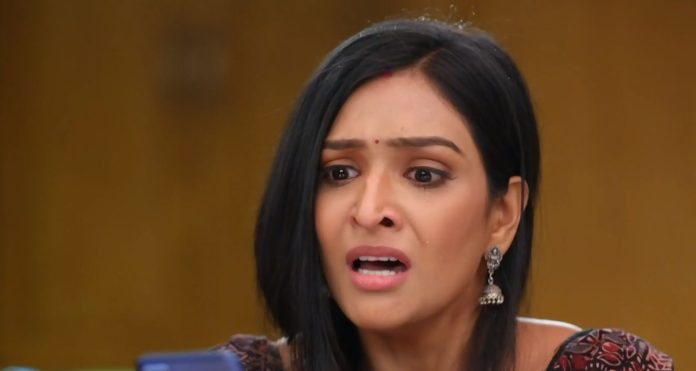 Bhagya Lakshmi 23rd March 2022 Written Update Docile Lakshmi Balwinder hurts Shalu. He shows Shalu to Lakshmi on video call. Lakshmi cries when she hears Shalu’s painful screams. Lakshmi warns him against hurting her sister. She doesn’t realize that the kidnapper is Balwinder. He tells that he will touch Shalu with a knife next time. He gives some time to Lakshmi and demands a big ransom. He tells that she can easily save her sister by bringing the money at the said place. He asks Lakshmi to see the gift that he sends in some time. Guddu keeps the box outside Rano’s house. Lakshmi checks the box and sees the blood stained clothes of Shalu. She panics more.

Rano asks Lakshmi to ask Neelam for money to save Shalu’s life. Lakshmi gets compelled to reach out to Rishi and Neelam to take help. Lakshmi gets to meet Malishka and Oberois in Rishi’s absence. She requests Neelam for money. Neelam insults her back and throws the money on her face. Rishi comes to Lakshmi’s rescue in the most unexpected way. Rishi was starting to dislike her that she blocked his number. Even Lakshmi was in disbelief that Rishi blocked her number. Malishka’s plan fails to keep them distant, when Lakshmi arrives to seek help Oberois. Will Rishi and Lakshmi get together while dealing with Balwinder? Keep reading.

Earlier in the show, Rishi tells Ayush that Malishka loves him the most, Lakshmi might be a good person, but she creates problems for Malishka and him. He decides to not let Lakshmi come between his relations. Ayush asks him to listen. He finds Malishka outside the door. She angrily walks away. Balwinder changes his voice and calls Lakshmi to shock her with the ransom call. Lakshmi is shocked to receive the kidnapper’s call. Balwinder threatens her on call. He demands a ransom of fifty lakhs. Lakshmi sheds tears in tension. Pritam and Rano pacify her.

Meanwhile, Rano calls Balwinder. She asks him to use his mind if he has it. He asks the matter. She tells that he asked for 50 lakhs for Shalu, who will give it to him. He tells that he had kidnapped Shalu for money. She tells that Pritam and Lakshmi aren’t believing the kidnapping. She adds that Pritam doesn’t have smartness, but today he sounded sensible. She tells that Pritam is asking Lakshmi not to believe the fraud call. He asks her what should he do now. She calls him a donkey. She asks him to send some proof that Shalu is with him, only then Lakshmi will believe him. Lakshmi tells that they should go to the police again. Neha tells that the police won’t help Lakshmi after her misbehavior. Rano makes an excuse in front of the family. Pritam asks Guddu to go home. He thanks Guddu for his time. Guddu makes a leave.

Lakshmi gets Balwinder’s call again. She tells that it’s the kidnapper’s call. Balwinder asks her to arrange 50 lakhs as soon as possible if she wants her sister. He tells that maybe she is thinking he is a fake kidnapper. He tells that he will give her the address to bring the money. Pritam rebukes him for the nonsense. Balwinder asks him if they want a proof. He hurts Shalu and asks them to identify her voice. Lakshmi and family hear Shalu’s scream. Lakshmi gets worried. Balwinder doesn’t let Shalu say anything about his identity.

Lakshmi warns Balwinder to not touch Shalu. He threatens of killing Shalu. He tells that he will send a picture to proof that Shalu is with him. Lakshmi cries seeing Shalu’s picture. She reprimands Balwinder further. He tells that he wants the money before 9pm, else he will kill Shalu. She asks him not to think of harming Shalu. He sternly threatens her. He tells that very soon she will get a gift from her side, she will like it. Guddu keeps the box and rings the bell. He runs away. Lakshmi and family check the door and find some box on the floor.

Balwinder has sent Shalu’s dupatta with real blood stolen from the blood bank. Lakshmi and Bani cry for Shalu. The family is shocked to see the blood stained dupatta. Rano and Neha pretend to worry for Shalu. Balwinder asks Lakshmi to just bring the money. Pritam tells that they have no money, they are really poor, even the house isn’t worth 50 lakhs. Balwinder tells that he knows that Pritam is poor, so he didn’t kidnap his daughter. He adds that he kidnapped Lakshmi’s sister for a ransom, he knows Lakshmi well. Lakshmi replies that she isn’t rich to give him 50 lakhs. He tells that he knows that she is Oberoi Bahu, they are really rich, they can give the money to help their Bahu.

He gives her the address and asks her to rush to her Sasural to get money. He warns her to not involve the police. Lakshmi tells him that she can’t get the money, she isn’t Oberoi bahu now, she is living with her uncle. He asks her why is she wearing the mangalsutra and sindoor if she isn’t Rishi’s wife. She asks him how does he know so much about her. She questions his identity. He asks her to get the money and know his identity face to face. Rano asks Lakshmi how will she ask Neelam for money. She tells that Neelam will help Lakshmi, because Lakshmi is still Rishi’s wife. She scares Lakshmi about Shalu’s safety.

Reviewed Rating for Bhagya Lakshmi 23rd March 2022 Written Update Docile Lakshmi: 3/5 This rating is solely based on the opinion of the writer. You may post your own take on the show in the comment section below.