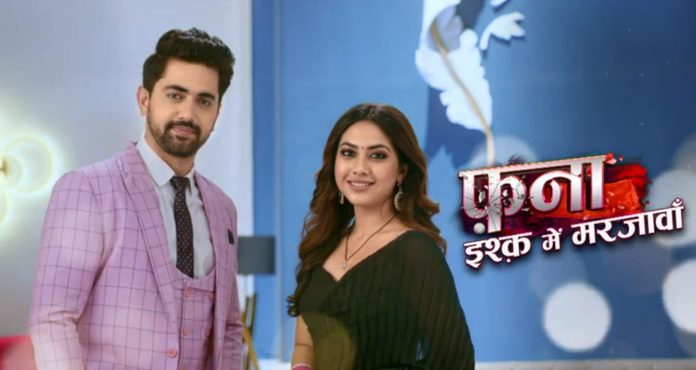 Fanaa 25th March 2022 Written Update Truth strikes Pakhi Pakhi and Srivastavas get shocked and emotional seeing Sameer alive in front of them. All of them run and hug Sameer. Pakhi asks Sameer if he is fine. Sameer caresses all members of his family and da says he is fine. Pakhi cries and hugs Sameer. She tells Sameer that the police scared them by saying various things. Pakhi asks Sameer how all this happened and where he was. Sameer starts telling something to Pakhi but feels unable to say anything.

Neelima and Agastya feel scared thinking what Sameer would tell Pakhi and Srivastavas. Scared Agastya and walks forward and lies to Pakhi and Srivastavas. He tells everyone that he found Sameer injured and unconscious near the end of the river. Pakhi akss Agastya why he didn’t tell anyone about it. Agastya tells Pakhi that he didn’t want to trouble anyone. He says Sameer remained unconscious for many days in the hospital. Agastya further lies to everyone that Sameer gave his shirt to some beggar/poor person. He says that Sameer got saved by swimming till the corner/end/shore of the river but that beggar died.

Prema and Sameer emotionally caresses each other. Prema tells Sameer that Agastya did a lot for them in his absence. She reveals to Sameer that Agastya saved their house and married Pakhi too. Sameer feels irritated, angry and disgusted by Agastya’s lies. Agastya smirks and walks towards Neelima. He hugs Neelima and tells her that he fulfilled the promise he made to her. Agastya further tells Neelima that he released Sameer and united him with his family. Neelima feels angry and disgusted with Agastya’s evil behavior and lies. Flashback shows Agastya threatening Sameer of Shanaya and Prema’s life.

He warns Sameer of not revealing his reality to Pakhi. Agastya tells Sameer that he had to hold him captive as he got to know his truth. He also tells Sameer that Pakhi would have never even talked to him if she would have got to know his truth. Flashback ends. Srivastavas seems overwhelmed with Sameer’s return. Agastya sees someone throwing a letter at his door and running away. He runs and tries to catch that man but fails. Agastya finds that the unknown person threw a letter for Pakhi. He opens the letter and gets shocked and scared seeing the images of him and Yug taking tied Sameer with them. Agastya asks his security incharge, who was it, who took a cab just now. Security incharge tells Agastya that he didn’t see anyone. Agastya asks his security incharge to run and check who it was. Security follows Agastya’s instructions.

Pakhi comes behind Agastya and asks him what happened. Agastya tells Pakhi that he ran behind a person he saw at their house door. Pakhi sees a letter in Agastya’s hand and asks him if that person kept it at their house door. Agastya says no and lies to Pakhi. They return inside their house. Agastya gets busy with other guests. Pakhi confirms from Shanaya if Sameer really told them that he got saved by swimming till the end of the shore. Shanaya says yes. Pakhi tells Shanaya that it’s not possible as Sameer doesn’t know swimming. She grows suspicious of something going wrong with Sameer.

Later, at the dining table Naveli tells Neelima and Mona that Sameer’s return seems like a miracle. Mona sees Pakhi and indirectly taunts her telling that people intentionally try to gain sympathy from others. This pricks Pakhi but she remains silent. Agastya comes and asks Mona to stop taunting Pakhi as she has got used to it. Mona sees a breaking news on her phone. She reads it in front of everyone. The news says that Inspector Virat got arrested in a drug case. Everyone gets shocked hearing this news. Neelima looks at smirking Agastya. She feels more disgusted on understanding that Agastya is behind Virat’s arrest.

Flashback shows Yug telling Agastya that according to CCTV footage, Virat kept the proof letter for Pakhi. Agastya decides to teach a lesson to Virat. Flashback ends. Mona taunts Pakhi telling her that she should be sad knowing that her old friend Virat got arrested. Agastya says Virat trapped Pakhi by lying to her and she was not at fault. Pakhi says she still regrets trusting Virat. At the same time Pakhi receives a message from Shanaya informing her that a scared Sameer left for sector 12. Pakhi lies to suspicious Agastya that she received a joke. Agastya makes Pakhi read the joke and she does. He doesn’t seem convinced by Pakhi’s lie.

Later, Pakhi is seen following Sameer. She wonders why Sameer came to the police station. Sameer thinks that now only police can help him and his family from evil Agastya. Before he could enter the police station, he received a call from Prema. Hearing something shocking, he runs home scared and Pakhi follows him. After returning home, Sameer runs to see Prema applying medicine to Shanaya. He gets shocked, worried and scared seeing Shanya injured badly. Prema tells him that Shanaya got hit by a biker. She also tells Sameer that it was good that Agastya was present at the same place and brought Shanaya home. Sameer turns and gets shocked seeing a smirking and angry Agastya.

Later, Pakhi also reaches home following Sameer. She gets shocked and worried seeing Shanya injured. Prema tells Pakhi that Shanya met with a small road accident and Agastya brought her home. She asks Pakhi why she came running like she knew about the accident. Pakhi tells Prema that she was already coming home to meet Sameer as she was missing him a lot. Agastya says he too was missing Sameer a lot. Sacred, Sameer says that the biker could have possibly killed Shanaya. This shocks everyone except Agastya. Pakhi asks Sameer why he is saying all this. Agastya explains to Sameer that he should not say such things.

In the next episode, Mohit will tell Pakhi that her engagement ring has a tracking chip/device in it. This information will shock Pakhi and she will recall that Agastya gifted her this ring. She will realize that Agastya has been keeping an eye on her for all these years. Hearing this Mohit will get shocked.

Reviewed Rating for Fanaa 25th March 2022 Written Update Truth strikes Pakhi: 5/5 This rating is solely based on the opinion of the writer. You may post your own take on the show in the comment section below.