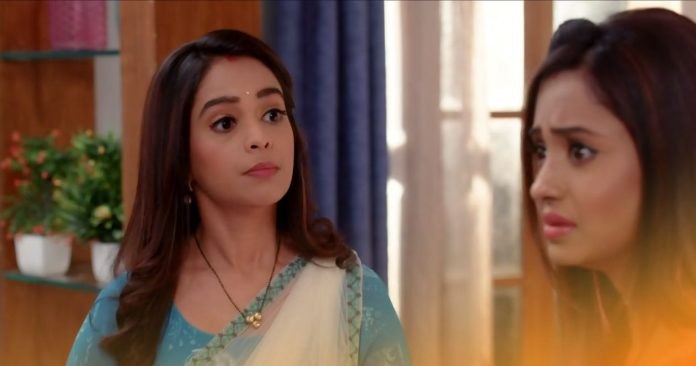 Kumkum Bhagya Upcoming Prachi confronts Rhea Spoilers Rhea truth is out. Prachi and Shahana confront Rhea. Rhea tells both of them that she is not able to understand what they are trying to say. Prachi volunteers to make Rhea understand. Prachi tells Rhea that she mixed a tablet in Ranbir’s drink so that he gets intoxicated and she can use this opportunity. Rhea is shocked. Prachi tells that she has done the testing of the tablet and found out that after consuming it a person loses his senses. She wants to highlight the fact that Ranbir would have not done anything that night, and just fell asleep. She wants to prove Rhea wrong. How will Rhea defend herself? Will Prachi be able to unmask Rhea’s conspiracy? Keep reading.

Meet upcoming spoiler – New Leap twist: Meet goes for her physical test in her injured state. She is demanded to jump 3 times crossing a 3 feet height then only she can pass the test. Mrs. Meet makes an attempt in pain and starts running. She falls down and blood starts coming from her leg. Mr. Meet tells her that a lot of blood is oozing out and the situation may go out of hand. But Mrs. Meet is adamant and tells that still 2 chances are remaining. Mrs. Meet ties a cloth to her left leg and starts running. Mr. Meet encourages her to show her strength.

Mrs. Meet reaches the finishing line and stops because of a rope. Will Mrs. Meet be able to jump and pass the test? Will her injury become an obstacle to her dream? Later in the track, a leap will be seen. Meet becomes a police inspector and returns home. Her Husband Meet Ahlawat awaits her home coming and is excited to welcome her. Meet tells him that she has chosen a new identity for her duty, she has got to know her dad’s murderer, who is someone from her in-laws. Meet Alhawat stops her and asks her not to cross her limits. He stands in front as a shield for his family.

Parineet breaks the door and goes to save Rajeev. She tries to wake him up but falls down unconscious beside him due to the fire. Rakesh tells his friend that Parineet left him for Rajeev but he wanted her so he planned to burn Rajeev. Rakesh is sure that Rajeev will die and he will be able to marry Parineet. Vikram comes along with the firefighters who take Rajeev and Parineet in a stretcher. Will Rajeev and Parineet survive or will Rakesh be successful in his evil plans?

Ghum Hai Kisikey Pyaar Meiin upcoming spoiler – Virat drunk-as-a-skunk:Virat is intoxicated during Holi and tries to trouble Sai. He gets dizzy and falls asleep on Sai’s bed. Sai is afraid of how will Virat behave the next morning. She prays to Bappa to handle the situation. Patralekha is also drunk. She sees Virat in Samrat and hugs him. Patralekha confesses her love to Samrat and he becomes happy. She takes Virat’s name and Samrat gets shocked. Samrat confusingly takes Virat’s name and Patralekha realizes her mistake. How will Virat react after getting up in Sai’s bed? How will Samrat digest Patralekha’s confession?

Virat is angry to know that Sai had mixed a special powder in Gujia. She reveals that she wanted him to feel relaxed, lighten his mood and celebrate Holi with his family members. Sai questions the family members if they didn’t become happy after seeing Virat sing, dance and laugh. Virat reveals that his older version will never come back. He says that he has a way to explain them and leaves. Everybody sense a bolt from the blue. What will be Virat’s explanation? Will Sai’s efforts go futile? To find out stay tuned and keep reading this space for more such upcoming tracks.

Mohit informs Pakhi that there is a tracker in her ring and it can track the location. Pakhi is stunned and looks at the ring. Pakhi says that this ring was given to her by Agastya. She realizes that for the past few years Agastya has been keeping watch on her. Pakhi is blown on learning about Agastya’s intentions. Will Pakhi confront Agastya or will he create a new story to fool Pakhi?

Vanraj strikes a deal with Rakhi to make Anupama say no to marriage. Bapuji and Samar are happy to see Anupama’s dancing trophy. Vanraj says that he is quiet now but after Anupama and Anuj return then he will surely question them. Abhimanyu and Akshara dance on Piya Tose Naina Laage Re while Anupama looks lovingly at them. Baa warns Bapuji that as Anupama crossed her limits so she too cannot back out now. Abhimanyu dances with Anupama and Akshara and they end the dance with namaste. Baa informs Bapuji that soon there will be darkness in their house. How will Anupama tackle Baa and Vanraj’s attack? Will Abhira’s engagement function go smoothly?

Imlie is enjoying her Haldi ceremony when Aparna informs that the panditji has told that marriage should take place in the evening. Imlie is happy but Aryan is shocked. Imlie gives a broad smile to Aryan. Imlie strikes a deal with Gudiya to escape from marrying Aryan Rathod. Will Imlie’s plan succeed or will Aryan spoil her conspiracy?

Rupy informs everyone that he got hold of Fateh and Tejo’s horoscope and it reveals that if they both get married then either of them will die. Fateh walks on the road depressingly and stands before a truck with open arms. Tejo cries and tries to stop Fateh. Rupy is shocked. Tejo goes running to save Fateh. Jasmine is also shocked to see Fateh’s behavior. Will Fateh meet with an accident or will his love for Tejo make him change his decision? Keep reading.