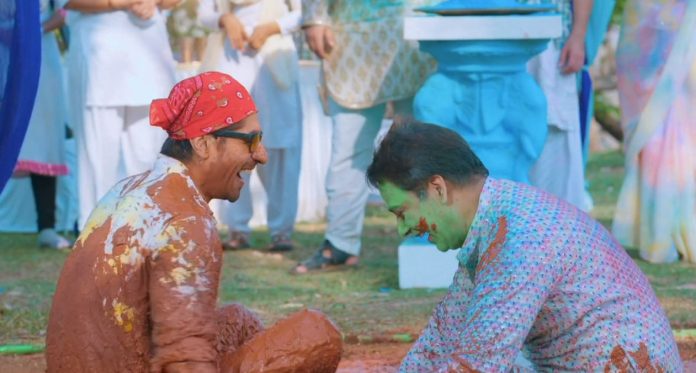 Yeh Rishta 29th March 2022 Written Update Abhi jolly Holi Abhimanyu and Akshara light a diya in the veneration plate. Both families fold their hands and pray to God. Suhasini thanks God for getting Abhimanyu and Akshara’s engagement without any issues. She also prays to God to get all the wedding ceremonies completed without any obstacles and with their blessings. Neil tells Suhasini to not worry as all the ceremonies and functions of marriage will happen without any issues. As Birlas start leaving for their home, Manish says let’s meet tomorrow. Harshvardhan asks why.

Manish says it’s holi tomorrow and they should celebrate it together. Harshvardhan says they don’t celebrate holi with that much eagerness and avoid colors too. Vansh asks when people will play with colors and craze, if not on holi. Harshvardhan rudely says everyone has a choice. He says they celebrate holi differently with less craze. Harshvardhan also says that they will have work in the hospital tomorrow. Suahsini tells Birlas that it’s their traditional ritual to visit daughter’s in-laws’ house with shagun, if any festival arrives in between her marriage.

Anand agrees for Goenkas visit at their house for the shagun ritual. He requests them to not come colored as he has called some doctors and surgeons, who doesn’t like seeing people covered with colors. In a low voice, Suhasini asks Swarna, how Birlas celebrate holi without colors. In a low voice, Akhilesh calls Birlas boring. In a low voice, Manish tells Akhilesh that Birlas will have to enjoy holi this year. His naughty expression shows that he is going to mix hemp in Birlas thandai. Akshara and Abhimanyu wonder how their families play holi. Neil announces that it’s Abhimanyu and Akshara’s first holi. Everyone claps and Abhimanyu and Akshara look worried.

At night, Aarihi recalls her car accident. She also recalls Abhimanyu’s anger and determination to find out his mother’s culprit. In sleep, Aarohi blurts out that she didn’t do anything. She stutters and says that she doesn’t know how Manjiri met with an accident. Akshara wakes up hearing Aarohi’s talking in sleep. Asleep Aarohi, keeps on saying that she didn’t do anything intentionally. Akshara wakes up Aarohi. When Aarohi wakes up, Akshara tells her that she was blabbering something. She asks Aarohi if she is still tense about their car accident. Shocked, Aarohi changes her expressions and tells Akshara that she is fine.

She requests Akshara to not say anything about their car accident to anyone. Akshara reminds Aarohi that she already told her that she won’t remain silent, if the accident conversation comes up. She asks Aarohi to not think much about the past accident. Aarohi again requests Akshara to not tell anyone anything about their accident. Akshara asks Aarohi to sleep. She makes Aarohi and herself lie on the bed to sleep too. Aarohi thinks about how she should stop thinking or stay silent. She also thinks, what proves the private investigator hired by Abhimanyu would have got till now.

At Birla house, Abhimanyu tries waking up Neil. Neil asks Abhimanyu what tension he is going through. Abhimanyu tells Neil that Akshara’s whole family plays holi. He asks what if Akshara will get angry knowing about their way of celebrating holi. Neil requests Abhimanyu to let him sleep and advises him to have romantic dreams. Abhimanyu thanks Neil and tries catching romantic dreams but still fails to sleep. Next morning, Anand is seen preparing snacks on the barbeque. He says Abhimanyu seemed happy yesterday as Manjiri will be returning. Parth asks where Neil and Abhimanyu are.

Harshvardhan says he is tense thinking if Goenkas will arrive with dhol and loud chanting, “Holi Hai, Holi Hai”. Goenkas overhear everything and tells Harshvardhan that they love him. Anand and Harshvardhan get shocked seeing Goenkas covered in colors. Whole Goenka family enters Birlas Holi Venue with jumps and leveled up craziness. Birlas sees Goenkas with stunned expressions. Aarohi notices silence around Birlas and thinks that Abhimanyu’s private investigator didn’t get any proof against her till now. She decides to remain alert. Anand reminds Goenkas that he asked them to come clean, not colored.

He says what will the invited doctors and surgeons think about them now. Manish tells Anand that they sell diamonds to his doctors and surgeons’ children’s wedding. He also tells Birlas that they can’t live without playing holi while they (Birlas) can’t play holi. Mahima requests Goenkas to at least clean/wash their faces to become recognizable. Manish and Akhilesh say everyone has different sizes. Manish and Harshvardhan keep on continuing their funny argument. Kairav asks about Abhimanyu’s whereabouts. Abhimanyu enters the venue in a funny way with Neil. . Everyone gets shocked seeing Neil and Abhimanyu playing Holi in wet mud.

Harshvardhan feels embarrassed. Vansh and Kairav feel excited with Abhimanyu and Neil’s way of playing Holi. Abhimanyu and Neil greet Goenkas. Goenkas feels happy thinking that Abhimanyu is very different from his boring family. Manish says Abhimanyu deserves to become Goenkas son-in-law. Abhimanyu asks Neil if Akshara will refuse to marry him seeing his present look. He also asks Neil what he should do as Holi is his favorite festival and weakness too. Neil tells Abhimanyu that he is getting tense unnecessarily. Both Abhimanyu and Neil ask Goenkas about Akshara’s whereabouts. At Goenka Mansion, Akshara feels that a better Holi celebration is to perform veneration, to apply shagun tikka and eat a lot of gujiya.

She wonders how people play holi with colors and take bath in wet mud on Holi. Akshara feels yikes thinking about all this. She thinks that “her Abhimanyu” isn’t crazy like this. Akshara feels apologetic towards Abhimanyu thinking that she can’t visit Birla house. Mahima asks about Suhasini’s whereabouts. Swarna says Suhasini has gone to Ashram. She also reveals that the bride doesn’t visit her in-laws when the shagun is given. This shocks Abhimanyu. At Goenka house, Akshara says that she doesn’t like playing holi at all. Neil tells upset Abhimanyu that he wanted to play holi with his new sister-in-law as Shefali will kill him if he will apply color to her.

Manish tells Abhimanyu that he felt good seeing Goenka’s son-in-law play holi even in a more crazy way than them. Abhimanyu pushes Manish in the mud and asks him to not feel bad as it’s holi. Manish blesses Abhimanyu and hugs him. Shefali finds Abhimanyu and Manish’s way of playing holi embarrassing. Harshvardhan feels jealous seeing Abhimanyu playing Holi happily with Manish. He wishes that someone either pushes him in the mud or challenges him, so that he can also join Abhimanyu, Neil and Manish. Everyone gets shocked and surprised seeing Abhimanyu, Manjsh and Neil crawling in mud like crazy people.

Akshara enjoys Gujiya and wishes that she could have also visited Birlas with her family. She wonders how Birlas play a clean holi. Akshara enacts Birla’s way of playing holi. She thinks that Goenkas will witness this clean holi for the first time. Akhilesh, Vansh, Kairav and Parth also join Abhimanyu, Neil and Manish in the mud. This shocks Birla woman but surprises Goenka woman. Harshvardhan pretends to fall in mud. Everyone gets shocked seeing Harshvardhan fallen in the mud. He lies to everyone that his foot got stuck in the pipe and thus he fell. Manish understands Harshvardhan’s lie and applies wet mud to his face. Anand also understands Harshvardhan’s lie and feelings.

Nishtha controls her desire of playing holi in mud. Abhimanyu misses Akshara. Aarohi gets her hands on Abhimanyu’s phone. She identifies it by seeing Manjiri and Akshara’s photo as home screen/wallpaper on it. Aarohi tries finding Private investigator’s chat with Abhimanyu about the accident. Abhimanyu gets shocked seeing someone/something. At Goenka house, Akshara starts preparing to make the video for the therapist council that Reem asked her to. She adjusts curtains for the background and thinks it will look excellent with her present outfit. Akshara thinks of sending the video to Abhimanyu also.

She thinks Abhimanyu won’t be upset about her non arrival as both of them don’t play holi. Akshara hopes that both Birlas and Goenkas enjoy holi without any tension or issue. Akshara receives Abhimanyu’s call on her house’s landline. Abhimanyu asks Akshara why she didn’t arrive. Akshara tells Abhimanyu that the bride doesn’t visit in laws on shagun. Abhimanyu tells Akshara that it’s their first holi too. Akshara says yes but refuses to visit Birlas house as per the ritual. Abhimanyu gets upset when Akshara disconnects the call.

Reviewed Rating for Yeh Rishta 29th March 2022 Written Update Abhi jolly Holi: 5/5 This rating is solely based on the opinion of the writer. You may post your own take on the show in the comment section below.