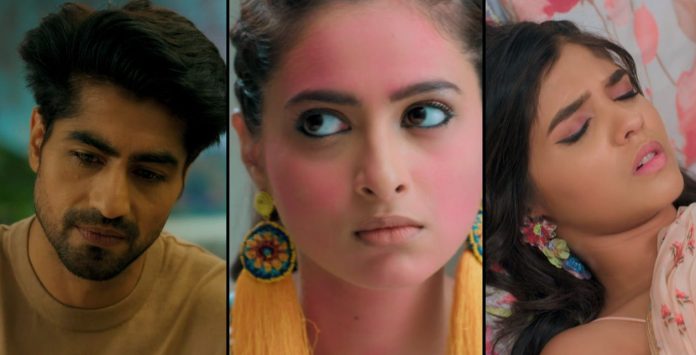 Yeh Rishta 1st April 2022 Written Update Aarohi’s truth Yeh Rishta 1st April 2022 Written Update Aarohi angrily asks Akshara to not mumble anything in an intoxicated state. Aarohi’s anger shocks everyone. She angrily asks everyone to not look at her suspiciously as she doesn’t know what Akshara is mumbling in her intoxicated state. Aarohi angrily asks everyone to shut Akshara’s mouth. Abhimanyu politely asks Akshara to say what she was saying. Suddenly, Akshara feels nauseous. Aarohi asks Kairav to take Akshara away to make her free of nauseous feelings. She says she is worried if something happens to Akshara.

Servant serves Abhimanyu’s order and leaves. Abhimanyu makes Akshara drink water and also wipes her mouth. He tells Akshara that she is cute and looks more cute under hemp’s effect. Intoxicated Akshara smiles cutely. Abhimanyu again tries to ask Akshara what she was talking about the accident. Akshara asks Abhimanyu to make her pony first, like he used to make of his dolls in childhood. Abhimanyu tells an intoxicated Akshara that he didn’t used to play with dolls in childhood. Akshara asks Abhimanyu, who will make her pony now as she doesn’t know how to make one. Abhimanyu starts making Akshara’s pony but she doesn’t like it.

Akshara requests Abhimanyu to clean the color of her cheeks as it’s itching over there. Abhimanyu wipes the color off from Akshara’s cheeks. Akshara shows tantrums when Abhimanyu feeds her curd. On the other hand, Akhilesh and Manish try making an intoxicated Harshvardhan drink lemonade but he also shows tantrums. Harshvardhan’s tantrums irritates Akhilesh and Manish. Tense, Aarohi thinks and decides to check on Abhimanyu and Akshara, so that Akshara doesn’t mumble anything about her. Neil stops her and asks why she is trying to come in between Abhimanyu and Akshara. Aarohi asks Neil to shut up as she is just going to check on Akshara.

Neil tells Aarohi that her senior, Dr. Abhimanyu is with Akshara and a junior like her doesn’t need to go there. He asks Aarohi to stop here only and also asks if she wants something else. Aarohi asks Neil to go away as she needs peace. Neil asks Aarohi what accident Akshara was talking about. Aarohi angrily leaves from there. Seeing this, Neil feels that something is fishy. Aarohi thinks if Abhimanyu gets even a little suspicious of her, he will for sure call the police. She thinks about what to do. Manjiri feels suspicious about Aarohi’s scared and angry behavior.

Akshara gets unconscious in Abhimanyu’s arms, while kissing him. Abhimanyu recalls Akshara’s incomplete words about some other or Manjiri’s accident. He wonders if Akshara was mumbling anything in an intoxicated state or if there is really something serious. Later, Abhimanyu asks Kairav to make Akshara sleep peacefully at home as she is still under hemp’s effect. Kairav asks Abhimanyu to not worry as Akshara is better than before. He asks Abhimanyu to take care of Harshvardhan. Swarna says they enjoyed this holi a lot. Mahima points at Harshvardhan and says they also got to see some people’s true nature. She says that now the house will take time to get cleaned. Manish hugs and blesses Abhimanyu.

Goenkas takes a leave from Birlas. Abhimanyu asks a scared Aarohi, what accident Akshara was talking about. He tells Aarohi that he saw tension on her face, when Akshara started talking about the accident. Abhimanyu asks Aarohi what is going on. Aarohi pretends innocence. Abhimanyu tells Aarohi that he doesn’t trust her and that’s why asking her in alone. He asks Aarohi if she or Akshara are in some problem as he is worried. Aarohi says she doesn’t know why the same thing happens in life. She says Sirat’s accident discussion happens again and again at home. Aarohi tells Abhimanyu that Akshara again and again connects Manjiri’s accident with Sirat’s accident.

She says Akshara feels guilty again and again thinking about why we fail to take care of our mother. Aarohi says only this is Akshara’s problem. She feels a little relaxed on getting successful to divert Abhimanyu’s attention from being suspicious. Aarohi asks Abhimanyu to ask Akshara if he doesn’t believe her when she will get out of her intoxication, her answer will be the same. She tells Abhimanyu that she enjoyed seeing Birlas covered in mud. Aarohi leaves thinking that she has to save herself by any means, especially from the private investigator whom Abhimanyu has put after her.

Kairav, Vansh and Aarohi make Akshara lie on bed. Aarohi assures her brothers that she will take care of Akshara. Aarohi feels thankful to God, thinking that her trouble ended. At Birla house, Harshvardhan asks Anand to give him some injection as his head is still throbbing with pain. Everyone laughs when Anand asks Harshvardhan, should he apply injection in his brain. Harshvardhan says he will beat the person who made him drink something which is making his head throb in pain. Neil takes the food tray to Manjiri. Shefali tells Harshvardhan that he did many unacceptable/funny things. Neil and Abhimanyu try feeding Khichdi to Manjiri. Manjiri throws a little tantrum for eating Khichdi.

He asks Manjiri what happened as it seems like she wants to say something but is something else. Manjiri asks Abhimanyu to promise her that he will always stand by Akshara, whatever happens. She smiles when Abhimanyu promises her that he will always stand by Akshara. At Goenka Mansion, in a sleepy state, Akshara mumbles that she has to tell Abhimanyu about the accident as she forgot it. Aarohi gets angry hearing this. Aarohi thinks that she has to stop honest Akshara from telling Abhimanyu about the accident by any means, even if she will have to emotionally blackmail Akshara.

In the next episode, at the dinner table Swarna and Vansh will ask Akshara what she was mumbling about accident in her intoxicated state. This will shock Aarohi and Akshara. Akhilesh will ask Akshara if something happened. In a lower voice, Akshara will say to Aarohi that they should tell the family about their car accident, as they don’t need to hide it from their family. Angry Aarohi will ask Akshara to remain quiet, if she really cares for her, even a little. Akshara will feel angry seeing Aarohi’s attitude. Abhimanyu on the other side, will feel apologetic for lying to Manjiri. He will get more determined to catch Manjiri’s culprit and punish whosoever he/she is.

Reviewed Rating for Yeh Rishta 1st April 2022 Written Update Aarohi’s truth: 2/5 This rating is solely based on the opinion of the writer. You may post your own take on the show in the comment section below.