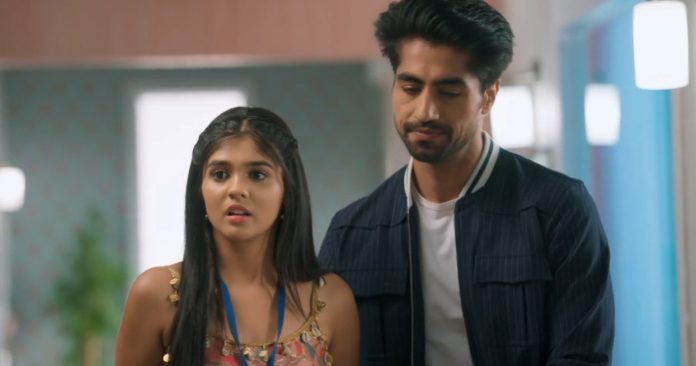 Yeh Rishta Abhi shocking discovery 2nd April 2022 Update Harshvardhan sees a video of his and Akshara’s intoxicated state from the time of holi celebrations. Harshvardhan (Harsh) says how dare Akshara call him “Harshu”, when even his family never called him by this name. Abhimanyu tells Harsh that even he never got intoxicated like this till now. He explains to Harsh that whatever happened, happened in his and Akshara’s intoxicated state. Abhimanyu leaves asking Neil to take Manjiri to his room. Harsh asks if their to-be daughter-in-law’s (Akshara’s) family taught her all this, this way to behave with elders.

Abhimanyu tells Akshara that he is feeling shy in telling her what she did. Akshara gets tense. On the other hand, Harsh asks Birlas why they didn’t stop Akshara or say anything to her. Mahima and Anand tell Harsh that it became impossible to stop intoxicated him and Akshara. Harsh says they should make Goenkas see this video and asks them where their daughter’s values vanished. Anand tells Harsh that no one will say anything to anyone. He also asks everyone to end this matter here only. Abhimanyu tells Akshara that she didn’t do anything in her intoxicated state even.

Both keep on thinking if they should ask or tell each other about the accident or not. Abhimanyu asks Akshara if she remembers about the kiss she gave him in her intoxicated state. Akshara gets shocked and Abhimanyu enjoys seeing Akshara’s shocked and shy look. Akshara tells Abhimanyu that she doesn’t remember anything like this and it didn’t happen. Abhimanyu asks Akshara to give him a kiss now. Akshara gives a flying kiss to Abhimanyu. Abhimanyu says, “oye hoye” in happiness. Akshara disconnects the calls saying, “I love you”. Akshara thinks of Abhimanyu’s reaction to her and Aarohi’s accident.

Abhimanyu thinks why he is feeling that Aarohi lied to him and Akshara is hiding something from him. He wonders what Aarohi and Akshara’s secret is. Abhimanyu sees a dream in which Aarohi is stopping Akshara from telling him about their accident but Akshara still reveals it to him. He suddenly wakes up and thinks about why he suddenly had such a dream. Next morning, at the breakfast table, Akshara asks her family why they are looking weirdly at her. She says she is very sorry for her behavior yesterday’s behavior. Akshara says she will visit Harsh and apologize to him. Manish says it’s not needed.

He tells Akshara that if she messed up, Harshvardhan also crossed his limits. Kairav says his stomach hurt laughing yesterday. Whole family laughs. Swarna, Akhilesh and Vansh ask Akshara which accident she was talking about. This scares Aarohi. Akshara lies to her family for Aarohi’s sake and says nothing happened. In a lower voice, Akshara explains to Aarohi that fate doesn’t always favor them. She says they should reveal about their accident to their family. Angry Aarohi blackmails Akshara by giving her her own oath to keep their accident a secret, if she cares even a bit about her.

This attitude of Aarohi shocks and angers Akshara. Angry Aarohi thinks, now Akshara won’t dare to reveal to anyone about their accident. On the other hand, Abhimanyu is seen talking to his private investigator on call. He agrees to meet his hired private investigator to get to know who did Manjiri’s accident. He feels apologetic towards Manjiri for still investigating her accident even though she asked him to stop all this. He says he won’t sit peacefully, till he gets to know who is responsible for Manjiri’s accident. Angry Abhimanyu says he will himself punish Manjiri’s culprit.

On the other hand, Aarohi laughs seeing Akshara preparing to apologize to Harsh for calling him Harshu in her intoxicated state. She tells Akshara that it shows love between father-in-law and daughter-in-law just like fathers and daughters. Akshara says she won’t leave Harsh’s feet till he forgives her. She wishes Harsh forgives her and no more problems arise in both families now. Harsh on the other hand, Harsh decides to teach a lesson to Akshara for her yesterday’s behavior with him. Aarohi shuts Akshara when she talks about their accident. She asks Akshara to forget that accident and never talk about it, especially in front of Birlas.

Seeing Abhimanyu’s shocked face, the young patient asks him if he gets so jealous of a young kid. Abhimanyu again cutely scolds the young patient and asks him to have his jelly. Both wonder why Akshara didn’t reach the hospital till now. Goenkas happily discusses that Naksh and Keerti are coming for Akshara’s marriage. Kairav says Akshara will be very happy knowing that Naksh is coming. Vansh says relatives get the chance to have a get together and enjoy themselves in the marriage times only. Swarna says maternal uncle’s (Mama’s) arrival is considered a big shagun in their house marriage.

She receives Suhasini’s message and tells everyone that Suhasini messaged that tomorrow is a special ritual of Akshara’s in-laws. Manish says Birlas doesn’t believe in all this and will create a drama hearing about another ritual. Kairav and Vansh say that this much fun is considered normal in marriages. Manish says limited fun is normal in relations, not much. He says they need to work carefully on this relationship, so that no problem arises. At the hospital, Akshara and Abhimanyu meet. Abhimanyu tells Akshara that he won’t let her be away from him, even for a minute if he can do so. Suddenly Akshara gets a little scared seeing a patient with her head wounded.

Akshara requests Abhimanyu to let this matter go as she is fine now. She tells Abhimanyu that usually she collides or falls here and there. Akshara promises to Abhimanyu that she won’t hide anything from him, now onwards. Both Abhimanyu and Akshara hug each other and also say, “I love you”. Abhimanyu still feels suspicious.

In the next episode, Abhimanyu and Akshara will be seen in hospital for lunch. Abhimanyu will ask Akshara to order something. Akshara will tell Abhimanyu that according to the ritual, she can’t open her fast, till she eats her in-laws’ made kheer. Abhimanyu will ask Akshara if she hasn’t eaten anything since morning. Akshara replies no. Abhimanyu will call at home and Manjiri will pick it up. He will ask Manjiri to ask the cook if he prepared kheer for Akshara or not as she has to open her fast. Manji will tell Abhimanyu that she asked Mahima to work on this as staff is on leave. She will think that Mahima is busy and thus will start preparing the kheer for Akshara herself. Manjiri will get dizzy and Akshara, Neil and Abhimanyu will handle/save her on time. Abhimanyu will say that Mahima should have informed, if she was busy. Mahima will reach home and ask what she should have told/informed.

Reviewed Rating for Yeh Rishta Abhi shocking discovery 2nd April 2022 Update: 4/5 This rating is solely based on the opinion of the writer. You may post your own take on the show in the comment section below.