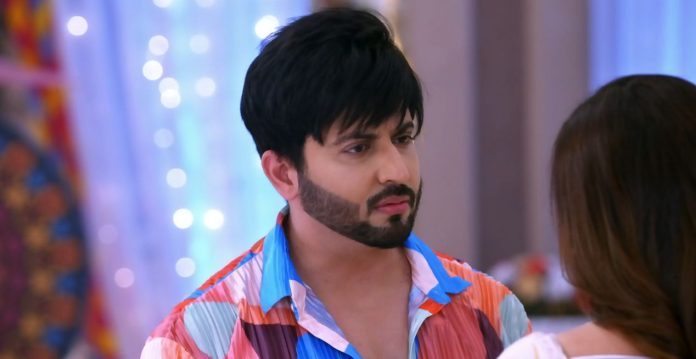 Kundali Bhagya 4th April 2022 Written Update Karan holi twist Karan invites Preeta to come and play with him. Kritika enjoys playing holi with the family. Preeta accepts Karan’s invite and goes to play holi with the family. She expects him to apply the colours to her, but he shockingly applies the colours to Natasha. Preeta gets upset when he passes by her and reaches Natasha to show his over-friendly behavior. Karan provokes Preeta to corner him and question him about his move that has driven jealousy in her. Kritika, Sameer and Shrishti are all worried seeing Karan’s indifferent mood.

Preeta catches Karan to get an answer. She gets angered on him and ultimately shows her rights as a wife. Karan loves to see her jealousy. The couple is then seen playing a romantic holi privately, while Natasha casts her evil eyes on him. Natasha has big plans to snatch Karan from Preeta. What would happen when Sherlyn and Natasha spike his drink and target him? Will Karan fall prey to their evil plans? Keep reading.

She is busy thinking what would Prithvi plan. She wants to do something to snatch Prithvi’s powers and make him totally weak. Prithvi recalls her words and rages that she defeated him, she is his biggest enemy. He feels she has always become an obstacle in his success. He promises to ruin her happiness and hurt her ten times the pain she has given him by getting him arrested. He wants to get bailed out and return home, just to trouble her. He tells that he will get Preeta jailed, he will cast a evil sight on her happiness. Constable calls Prithvi mad because of his self-talks. Prithvi tells that it’s a silence spreading, that’s the silence that occurs before the storm, Karan and Preeta can’t tolerate the storm, their destruction has begun.

Naagre thinks he had lost his mind by believing Pradeep. He tells Prithvi has made him a thief. He gets angry on Preeta and feels enmity towards her. He thinks he will become a zero if he proceeds with the plan. He recalls Prithvi’s words. He thinks he can go in a disguise, Preeta can still catch him, she is supersmart, she is the number one player. He prepares to take a disguise. Meanwhile, Karan and Preeta have a moment, when they both can’t get their eyes off each other. Karan asks her if she is upset about something. He tells her that she is really good.

He confesses that he likes her, she looks really pretty. She laughs on his confession. He tells her that he thinks she is upset about something. She tells that when things aren’t like she wants, then she feels angered. He tells that she can come and play holi with him. He goes to play holi with her. He scares her with the colours. He goes lost in her eyes. She closes eyes thinking he will smear the colours on her face, but he applies a decent tika on her forehead. He thinks he has done a shagun for the holi by applying the tika.

Preeta thinks he has just applied the tika to play holi, like she is a big problem for him. she gets upset. Karan stops her. He tells that its not his type of holi. He takes colours and runs after her. Preeta runs away. They play holi with the family. Mahesh joins them. Karan and Preeta get really happy to play with Mahesh and Rakhi. Rakhi and Kareena also have the fun with the children. Karan and Sameer get glad when Kritika joins the family. Sameer gets to see Shrishti there. He gets drawn towards her. He gets happy when Shrishti calls him. She smears the colours on his face. He asks her why did she apply it to him, when she refused to him. Shrishti tells that no one takes permission for applying colours.

Mahesh catches Karan and applies the colours to him. Preeta gets glad to see Mahesh happy. Mahesh dances with the family. Kritika hugs Karan and wishes him. She tells that she loves him a lot. Rakhi compliments Preeta. She goes to attend guests. Shrishti asks Preeta doesn’t she want to play holi with Karan and get coloured in his colour. Preeta tells that she has played holi with Rakhi. The sisters play holi and laugh. Karan goes towards Preeta with the colours and then goes to Natasha. He applies the colours to Natasha and pleases her, just to make Preeta jealous. Sameer watches this and thinks Karan has done wrong to upset Preeta. Preeta thinks to take revenge on Karan in her way.

She comes across but doesn’t identify him. Sherlyn meets someone. Natasha thinks Sherlyn is planning something against Preeta. Naagre calls Pradeep and asks him where is he. He asks Pradeep to come to him. Pradeep finds Naagre in the disguise. Naagre tells that nobody should identify him. Pradeep irritates him. Naagre tells that they have come to steal the papers. They get spotted by Girish. Girish asks Naagre to come to kitchen and work. Pradeep thinks he doesn’t need to take a disguise, everyone thinks he is a rich man. Preeta tells Karan that she thinks he is disgusting that he has played holi with Natasha.

Karan doesn’t come in her words and goes away. Sameer and Shrishti find Preeta angry that Karan has shown attitude. Preeta tells Shrishti that Karan didn’t play holi with her. Shrishti asks her to ask Karan. Preeta tells that she will go after Karan and find out. Shrishti prays that they don’t end up fighting. Sameer wants to know why did Shrishti go after Karan and Preeta. He knows that Preeta’s anger on Karan is justified. Sherlyn thinks someone is following her. She doesn’t see anyone. She thinks she is going to do a wrong work, so she is being so cautious.

Reviewed Rating for Kundali Bhagya 4th April 2022 Written Update Karan holi twist: 4/5 This rating is solely based on the opinion of the writer. You may post your own take on the show in the comment section below.