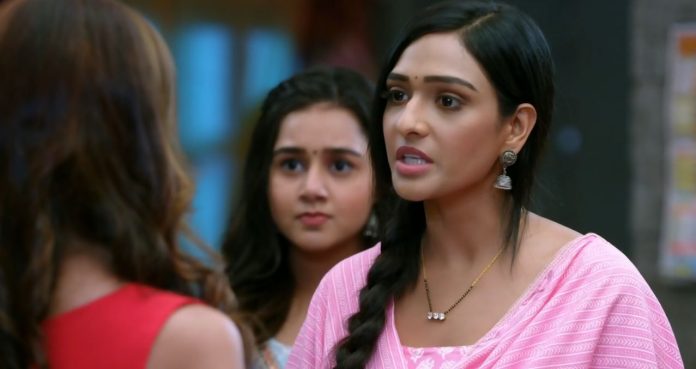 Bhagya Lakshmi 6th April 2022 Written Update Rishi Lakshmi meet Rishi comes to meet Lakshmi at her house. He thinks to make an excuse. He finds the door locked. He leaves a note for Lakshmi and writes his secret name so that she realized that he had visited her. Rishi leaves from there. Rano and Shalu come home. They don’t see Rishi. Lakshmi also arrives home. Rishi senses Lakshmi, but doesn’t get to see her. He calls her to meet her once. Lakshmi gets his call. She answers his call and asks him is he able to hear her voice. Rishi acts like he didn’t call her. He apologizes to her. He tells her that he doesn’t have any time to talk to her. She reminds that he has called her. He makes an excuse.

Neelam tells that she wants Lakshmi to sign the divorce papers, so she won’t stop Malishka, she has already sent Malishka to Lakshmi to get the latter’s signatures on the divorce papers. Rishi tells Neelam that Lakshmi is a nice person and he likes her a lot, so he will not divorce her. He refuses to Neelam. Virender and Dadi get glad. They support Lakshmi. Malishka meets Lakshmi and hands over the divorce papers. Lakshmi refuses to sign the papers. Malishka lies that there is no hope left between Rishi and Lakshmi’s relation, because Rishi and she/Malishka has already crossed all the limits. Lakshmi is shocked.

She tells that Lakshmi had come home and she was ousted. Devika tells that Malishka is going to Lakshmi’s house to get signs on the divorce papers, even Neelam has permitted Malishka. Dadi worries further. She tells that she won’t let this happen. Devika tells that Malishka is going today itself. Ahana asks Dadi to do something. Dadi tells that she will call Rishi, he won’t divorce Lakshmi, because he loves her. She calls Rishi and then Ayush. Ayush answers the call. Dadi asks him to make her talk to Rishi. She tells about Rishi and Lakshmi’s divorce. He is shocked too. She asks him to inform Rishi. She cries a lot.

Rishi looks ahead to meet Lakshmi. Ayush calls him and asks is he divorcing Lakshmi. Rishi is shocked. He asks Ayush who told him. Ayush tells that Neelam and Malishka have decided this divorce. Rishi swears that he doesn’t know anything. He asks Ayush to come home. He also rushes home to find out the matter. Rano and Neha insult Lakshmi. Lakshmi tells that she wants to be with Rishi and protect him. Rano tells that she knows that Lakshmi loves Rishi. She asks Lakshmi not to be shy, its her right to love her husband. Bani tells that everyone loves Lakshmi in the family except Neelam and Karishma. She asks Lakshmi to inform Rishi before going there again.

She tells that Lakshmi broke the marriage herself, now Rishi shouldn’t be shocked on hearing about the divorce. Rishi tells that he broke the relation in anger. Kiran reminds him that he had proposed Malishka. She asks him to know that Malishka made compromises for him, she got insulted and today he is questioning about his divorce. Neelam tells Rishi that his relation already broke with Lakshmi. Virender asks her how did she change suddenly. He tells that Neelam had offered money to Lakshmi and wanted her back. Neelam tells that she pleaded with Lakshmi but the latter didn’t come. Rishi tells that he can’t file the divorce because of Markesh dosh. She tells that Badrinath cheated her.

She asks him to understand that Lakshmi is unlucky for her. Rishi tells that he will not believe all this. He adds that Lakshmi will ask a big alimony, he doesn’t want to give her all the savings. Neelam tells that they will pay any amount to get the divorce. She declares that its her final decision. Virender is against her. He tells Rishi that Lakshmi will never break the relation on papers. He knows her well. Rishi tells that he also knows Lakshmi, she will not sign the divorce papers. Rishi likes Lakshmi as a friend and doesn’t want to break their marriage. Neelam tells that its too late now, she won’t stop Malishka, who already left with the divorce papers.

Ayush gets worried for Rishi and Lakshmi’s relation. Rishi wonders what he would do now. Shalu asks Lakshmi to call Rishi and tell him whatever happened. Rishi wants to call Lakshmi and inform that Malishka is coming to her with the divorce papers. Lakshmi tells that the number is busy. Rishi and Lakshmi try calling each other at the same time. Dadi and Virender ask Rishi to take a stand for Lakshmi. Rishi tells that he knows that Lakshmi will never sign the papers. Rano tells Lakshmi that Malishka has come to meet her.

Reviewed Rating for Bhagya Lakshmi 6th April 2022 Written Update Rishi Lakshmi meet: 4/5 This rating is solely based on the opinion of the writer. You may post your own take on the show in the comment section below.