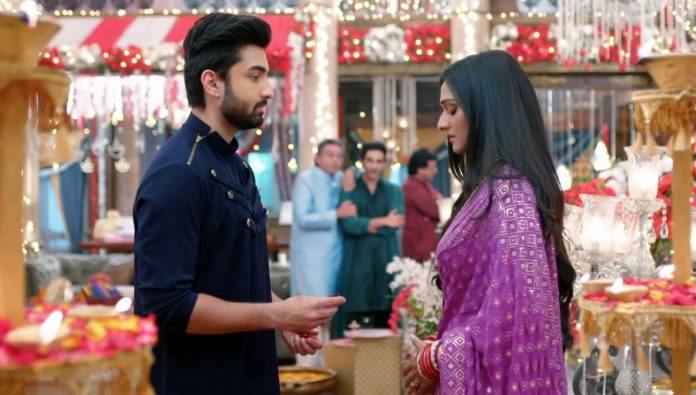 Bhagya Lakshmi Divorce twist 6th April 2022 Spoilers Neelam asks Malishka to meet Lakshmi and get divorce papers signed by her. Dadi informs on call that Rishi and Lakshmi are getting divorced. Neelam informs Virendra and Rishi that Lakshmi and Rishi’s relationship has already been broken and she is just doing it legally. Malishka tells Lakshmi to sign the papers. Rishi is sure that Lakshmi will not sign it. He confesses to Neelam that he really likes Lakshmi. Lakshmi refuses to sign the papers and tells that she will stay with Rishi. Neelam tells that she wants Lakshmi to sign the papers and so will not stop Malishka. Malishka lies to Lakshmi that she and Rishi have crossed all the boundaries and there is no chance for her. Will Lakshmi be firm and stay with Rishi for a year?

Vanraj tells Paritosh that if the deal would have been finalized then they would have something to say to Malvika. Malvika comes to Shah house and fires Paritosh, Kavya, and Vanraj from her company. Paritosh, Kavya, and Vanraj are shocked beyond words. Malvika declares that if they did not want to bless her brother and sister-in-law it was their wish. She tells Baa that her curse turned its way on her. Vanraj tells Malvika to get out of his house. How will Vanraj bear the defeat? Will he spoil MaAn’s wedding?

Imlie makes Sheera for Aryan but aunty Blue mixes spice in it. Imlie takes Sheera to the hospital to feed Aryan. She convinces him lovingly and he agrees to eat it. Arpita and Narmada smile looking at Imlie teasing Aryan. Imlie feeds Sheera to Aryan. At first he senses it to be spicy but goes on eating as Imlie feeds him. Imlie finds it strange when Aryan holds her hands and puts every morsel in his mouth. Will Aryan tell the truth to Imlie? Will Aryan fall ill after eating Imlie’s spicy Sheera?

Rajeev goes to drop Parineet at her parent’s house for a pagphera ritual. On the way Rajeev protects Parineet from getting hurt when a biker overtakes them. Rajeev feels that if he doesn’t drop Parineet safely he will not get his freedom or accomplish his dreams. Rajeev and Parineet are welcomed nicely. Chachi tells Parineet that Rajeev doesn’t love her and only married her for their land. She reveals that Rajeev and Gurinder were at the registration office during her mooh dikhai ceremony. Parineet is not able to control her emotions and cuts her wrist with a knife. Will Parineet’s drastic step separate her and Rajeev?