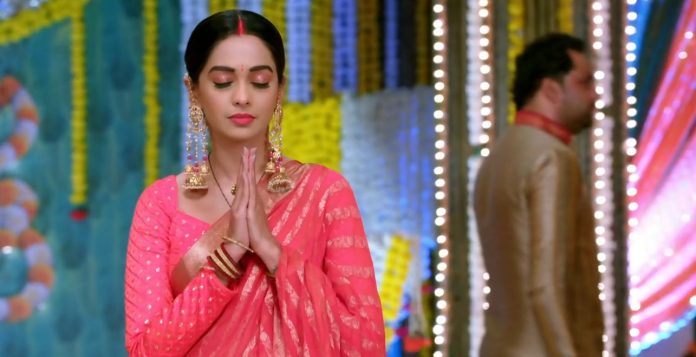 Kumkum Bhagya Huge twist 6th April 2022 Spoilers Nick starts cutting the rope. But Aaliya intervenes and tells him that it is not his cup of tea. She breaks the rope in one blow. Nick and Aaliya wait to see the consequences of their action. The jhoomar is about to fall on Prachi. Pallavi is shocked to see Jhoomar coming down. Rhea is happy. Ranbir sees it and goes to save Prachi. Will Ranbir be able to save Prachi from Aaliya’s attack?

Saroj becomes distant and behaves coldly with her family members. Nakul questions his brothers if their mother will ever behave like before. Krishna says that they will do something and convince her. Chiranjeev doubts that Saroj may do something before them. Saroj tells Priya to bring all her family members to Chaudhary house at 10. Sayuri is worried about Saroj’s invitation. Saroj is all decked up. Krishna finds Saroj’s behavior strange. Saroj welcomes Indrani and her family. What will Saroj’s decision be? Will she accept Sayuri and Chiranjeev’s relationship?

Priya and Ram romance in a cheap hotel room. The police questions Ram if he took the room on an hourly basis along with his wife. Rams replies yes. The police tell Ram to come to the police station with him. Priya finds Ram missing and gets to know that he is arrested. Priya tells the police that Ram has come with her to spend time and she is his wife. The police agree to leave Ram as she is the witness. Priya calls herself Ram’s wife. Ram is confused about Priya’s behavior. He asks her that on one side she defends him and on another side she compares him to her dad. What will be Priya’s explanation?

Ishaan is lying on the bed. Agastya pours water into a glass. Pakhi is observing everything from behind the curtain. Agastya throws the glass and it breaks into pieces. Pakhi is scared. Agastya picks up a piece and stabs Ishaan on his leg. Ishaan holds the bedsheet tighter but doesn’t utter a word. Shubham is shocked. Pakhi hides her face in utter fear. How will Pakhi save Ishaan from Agastya’s torture?

Swaran Ghar episode spoiler – Swaran is confident:
Swaran is on a call when Vikram asks her if she is repenting after giving him the money. He volunteers to give it back. Swaran replies that all of them are strangers and unknown to her now. Swaran firmly replies to Vikram, Yug, and Nakul that Swaran Kawaljeet Bedi doesn’t take money from strangers. Nakul says that she needs a big tongue to speak big but to run a house one needs money. Swaran says that her hands will work and earn money too. Swaran gives a smile of victory to angry Nakul. How will Swaran earn money to run the house and prove her sons wrong?

Mrs. Meet meets Tej Ahlawat outside the sealed Ahlawat Pharmaceutical. She tells Tej that when the truck left it contained fresh medicines but when it reached its destination they become expired commodities. Mrs. Meet feels that there must have been a mishap in the middle. Mrs. Meet and Tej go to search for evidence and reach a lake. Mrs. Meet slips and a stone falls in the lake. She finds a tablet and Tej identifies it as their product. Mrs. Meet doubts that there are more medicines inside. She sits on a crane and goes to lift it up. Will Mrs. Meet be successful in proving Ahlawat Pharmaceutical guilt-free?