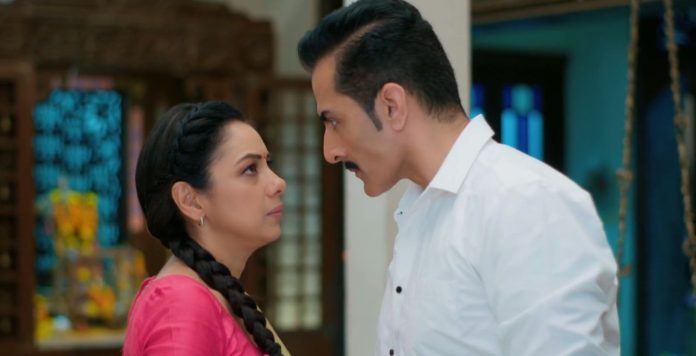 Anupama 6th April 2022 Written Update Shocker for Vanraj Paritosh returns to Shah house angrily. Anuj asks Anupama if she is fine. Anupama replies that she is fine and asks Anuj to return home. Anuj refuses to leave Anupama alone after whatever happened. Anupama tells Anuj that arguments will increase if he will go inside with her. Anuj tells Anupama that he knows it and that is why he won’t let her go and face the arguments alone. Anupama tells Anuj that she will tolerate anything but not anyone humiliating him. Seeing Paritosh returning home angrily with torn clothes, Vanraj asks him what happened.

Paritosh reveals that he got indulged into a fight with his friends because of Anupama and Anuj. Baa says she was trying to explain to Anupama this thing only; to not make her children’s life difficult for her happiness. She also says that they will hear people’s taunts and harsh words but children will have to hear all this their whole life. Paritosh says they aren’t getting any work because of Anupama. Vanraj asks Paritosh if he fought with Yash. Paritosh says Yash was talking rubbish about Anupama and he had no option left. He also says that Anuj and Anupama have made their both personal and professional life difficult.

Vanraj tells Paritosh that he understands his anger but sometimes a person needs to control his or her anger. He reminds Paritosh that meeting and cracking a deal with Yash was so necessary for them. Vanraj tells Paritosh that they would have had something to say to Malvika, if this deal would have been finalized. Suddenly Malvika enters the Shah house, shocking everyone. She apologizes for arriving late at night and says it’s her habit. Bapuji and Mamaji happily say hi to Malvika. Malvika returns them a smile. She shocks everyone by saying that she is firing; Kavya, Vanraj and Paritosh from her company. Malvika also gives them their salary which they have earned till now.

Vanraj reminds Malvika that she gave them 1 month’s time. Malvika tells Vanraj that yes she gave him 1 month’s time as well as a chance but he didn’t become a better person and that is why she won’t for 1 month to complete. Vanraj says this is not done and asks what wrong he has done. Malvika tells Vanraj that what he and his family did with Anuj and Anupama, that is also not done. She says GK told her everything they did with her brother and to-be sister-in-law. Malvika tells Baa that she shouldn’t have given blessings to Anuj and Anupama if she is against their marriage, and asks Baa why she cursed Anuj and Anupama instead.

Malvika tells Baa that some things come back to people and as per her curse to Anupama, her (Baa) curse returned to her only today. She asks Baa to see that untoward happened to her son, daughter-in-law and grandson only. She asks Baa if now she is happy knowing that as per her curse her 3 family members lost their jobs in an instant. Everyone gets shocked. Malvika tells Vanraj that she crossed her limits because initially he crossed his limits. Angry Vanraj asks Malvika to get out. Malvika says she is going and asks Anupama’s supporters to accompany her outside and enjoy the open and fresh air with her.

Seeing Anupama at the entrance, Malvika runs and hugs her tightly. Anupama hugs Malvika happily. Angry, Vanraj asks Malvika and Anupama to reconcile with each other outside. Malvika takes Anupama outside saying that Shah house’s faces and vibes aren’t good. Outside the Shah house, Malvika hugs Anupama happily. She tells Anupama that now she will call her, her sister-in-law with full rights. Malvika also thanks Anupama for agreeing to marry Anuj and for becoming her sister-in-law. Anupama hugs Malvika happily. Both of them tell each other that they missed each other a lot. Anupama tells Malvika that Anuj missed her the most.

Malvika tells she thought she herself was the coolest person in the world till she saw her (Anupama’s) marriage announcement video. She tells Anupama that accordingly she should have met Anuj first but her anger went heavy on her love. Malvika tells Anupama that she failed to control her anger and thus came to teach a lesson to Vanraj and his gang. She wholeheartedly apologizes to Anupama. Anupama asks Malvika to forget everything that happened. Malvika asks Anupama how she can forget that she unintentionally let Vanraj do wrong with her and Anuj. She tells Anupama that she won’t ever be able to forgive herself for her stupidity of believing Vanraj over her and Anuj.

Anupama asks Malvika to forget it as she and Anuj forgot all that happened in the past. Malvika says she will try but knows that she won’t be able to forget all that. She wipes her tears with Anupama’s saree and expresses her happiness over Anuj and Anupama’s marriage. Malvika says finally Anuj’s wait is over and now his sad shayaris will turn into a romantic one. Malvika’s voice can also be heard by Shahs. While Anupama’s supporters feel happy hearing all this, her non-supporters get more angry with Malvika and Anupama’s happiness. Bapuji, Mamaji and Samar go outside.

Malvika expresses her happiness with Samar, Bapuji and Mamaji. She apologizes to them for talking harshly. Malvika explains that she failed to control her anger. Bapuji replies that they can understand. Malvika screams and says let jealous people go to hell. She dances with Anupama’s supporters outside Shah house, screaming that soon her “MaAn” will get married. In a loud voice, Malvika asks Samar to not add jealous people to the MaAn wedding group. Angry Vanraj, pushes furniture thinking that his peace got snatched in his own house. Everyone hears the furniture noise. Anupama asks Malvika to return home. Malvika says she doesn’t fear Vanraj and his gang.

Anupama somehow convinces Malvika to return home. Vanraj and his gang grow angry. Malvika leaves saying, “I love you Anu Bhabhi”. Samar leaves to drop Malvika to her cab. Anupama says something always gets messed up. She also says Malvika’s decision is absolutely right, but no one can make Vanraj understand the right thing. Anupama says how much a person can handle. Bapuji explains to Anupama that the way to happiness is always difficult. He says the amount of difficulties that a person will handle today, he/she will gain the same amount of happiness in future. Anupama says she doesn’t know how many tests she will have to face/give to reach that happiness.

Bapuji asks Anupama to not worry, everything will go fine. He informs and leaves on a walk with Mamaji. On the other hand, GK tries to calm Anuj’s anger and tension. He explains to Anuj that if evil people like Vanraj, Kavya, Rakhi, Baa and Paritosh exists, good people like him, Anupama, Samar, Kinjal, Bapuji, Devika, Mamaji, him and Malvika also exists in this world. Anuj says his problem is that Anupama is in Shah house at present. He says except 4 people, all negative and toxic people live at Shah house. Anuj says even a good person starts getting negative vibes in such a toxic environment. GK says everything would go fine. He shuts down Anuj, when he asks if his and Anupama’s marriage will stop because of all this.

Anuj tells GK that the bigger the happiness, the more the evil eye/bad sight’s fear arises over it. Gk asks Anuj to not think about all this. Anuj says he doesn’t want to think all this but this fear comes and stands in front of him always. He also says that he isn’t habitual of this much happiness and even doesn’t have faith in his fate. Anuj tells Gk that his uninvited fear will end only when he will finally get married to Anupama. Vanraj and Anupama glare at each other. Back at Anuj’s house, GK calms Anuj through a motivating shayari/poetry. Anuj asks GK how he learnt Shayari. GK makes Anuj laugh by telling him that he has been bearing a lover all his life.

Malvika makes a cool entry and makes Anuj and GK happy. Emotional Anuj hugs Malvika tightly. At Shah house, Anupama tries explaining to Vanraj to calm down for himself at least. Vanraj asks Anupama why she is giving him lectures after defeating him. Anupama tells Vanraj that she and Anuj didn’t do anything. Vanraj tells Anupama that his efforts went waste because of her and Anuj. Anupama tells Vanraj that a person’s efforts don’t work if his/her intentions are wrong. She explains to Vanraj that he fails every time because he does everything to defeat others, not to make himself win.

Anupama tells Vanraj that he still has time left to improve himself and his actions. She asks him to calm down as she isn’t giving him lectures. Anupama tells Vanraj that she explains to him being helpless because her children’s happiness is connected to him. She explains to Vanraj that he shouldn’t waste time on troubling her as she will go away from his life in a few days after marrying Anuj. Anupama also explains to Vanraj that wrong doings come back to a person, who committed it. Angry Vanraj asks Anupama to go to hell. Anupama leaves rudely, asking Vanraj to go to hell.

In the next episode, Anupama will offer turmeric milk to Paritosh. Selfish Paritosh will rudely ask Anupama to apply milk’s turmeric to herself. Kavya will shock Rakhi by telling her that Malvika came and business partnership, work and everything ended/got finished. Anuj will get more worried about his and Anupama’s marriage after knowing that Malvika fired Kavya, Vanraj and Paritosh.

Reviewed Rating for Anupama 6th April 2022 Written Update Shocker for Vanraj: 4/5 This rating is solely based on the opinion of the writer. You may post your own take on the show in the comment section below.