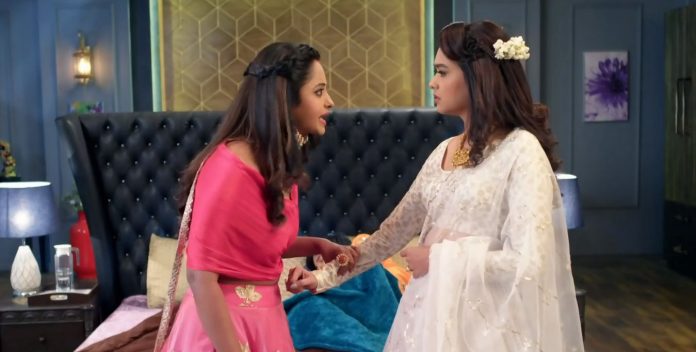 Kumkum Bhagya Rhea confession 7th April 2022 Spoilers Rhea tells that Prachi is nice and good things happen with good people. Ranbir tells that many people cannot see that. He tells that he doesn’t want to assume anything because the guy who ran away has told him everything. Rhea is shocked. Rhea tells the police inspector that the guy has troubled her a lot. She suddenly stops speaking after realizing that she is blurting out the truth. How will Rhea save herself from the accusation of trying to kill Prachi?

Mithai upcoming track – Siddharth saves Mithai:
Guru forcefully takes Mithai with him out of the venue. Siddharth sees this and stops Guru. Guru asks him who is he to question him. Siddharth gives a tight slap to Guru. Siddharth shouts at Mithai and tells her that Dadu went against the whole family and helped her. He warns her to make sure that she doesn’t come out of the venue till the competition is over. Mithai thanks Siddharth and runs inside. The judges are ready with the results. Mithai prays to god. Will Mithai win the competition and get back her father’s shop?

Mrs. Meet takes a vow to serve the police department with honesty. She gets a medal and certification. Honda and Ahlawat families cheer and clap happily at Mrs. Meet’s achievement. A man comes to seek help from Mrs. Meet. He complains that he paid his neighbor full money for a car but now he is refusing to give it. Mrs. Meet tells the man to bring half a kilo of Jalebi. Mr. Meet had dreamed that his wife will make an action-packed entry and bring everyone under control but she is asking the man to order Ghasitaram’s jalebi. What is cooking in Mrs. Meet’s mind? How will she do the justice?

Aunty Blue and Gudiya suspect that Imlie and Aryan are pretending to be in love and decide to find out the truth. They hide outside Imlie and Aryan’s room to keep a watch on them. They see Imlie leaving the house late at night. Gudiya clicks Imlie’s picture when she opens the door and goes out. Neela vows to separate Imlie and Aryan forever. What new tactic will Neela and Gudiya use to spilt Imlie and Aryan?

Kajal Asthana catches Diya blushing and tells her to confess her love to the person she was thinking about. Diya feels happy. Armaan gets a message inviting him to meet in the evening to talk about something important. Palki happily tells Diya that she has agreed to Armaan’s proposal. Diya is utterly shocked. Will Diya sacrifice her love for Palki?

Anupama goes to convince Paritosh. She takes turmeric milk for him. Paritosh asks Anupama to take it with her and apply it to her hands. Anupama feels hurt. Kavya video calls Rakhi Dave and starts crying. She reveals that Malvika broke the partnership and fired all three of them. Kavya tells Rakhi that everything is over. Rakhi is surprised. Vanraj breaks into tears of defeat. Anuj is afraid that Vanraj and Baa’s anger may affect his marriage with Anupama. Will Vanraj still be quiet? To what extent will he go to ruin MaAn’s wedding?

Rudraksh tells Saaransh that being the trustees of the school they will have to call the police. He tells that whatever has happened is entirely their responsibility. Ruhi’s classmate tells her that Preesha is very bad as she gave drugs to the students. Ruhi tells him that Preesha is not like that. He tells that police have come to arrest her. Ruhi is shocked. The principal informs the police that they found drugs in the chocolates given by Preesha to the children. Preesha is arrested. Dev feels happy seeing his victory. Will Rudraksh save Preesha from this incident?

Akshara gets to know from her patient that Aarohi had gone to Manjiri aunty’s accident spot. She is tensed as Aarohi avoids her question. The next day Akshara asks Aarohi to finish the conversation which was left halfway through yesterday. Akshara asks Aarohi if there is any connection between them and Manjiri’s accident. She pressurizes Aarohi to tell the truth. Aarohi tells yes leaving Akshara flabbergasted. Aarohi tells Akshara not to stare at her as it was just an accident and nobody died. Akshara slaps Aarohi. Will Akshara tell Abhimanyu the truth or will she keep quiet for Aarohi’s sake?

Devraj learns a shocking truth about Daksh which leaves him heartbroken. He gets wet in the rain and vents out his sorrow. Krisha runs behind Devraj to calm him down. Krisha protects him with the veil of her sari. She informs Devraj that now he needs love and care and should stop living for others. Krisha promises to support him and says that it was not his fault. She asks Devraj to not punish himself and insists to look at her. Devraj apologizes to Krisha with folded hands. He walks alone in the rain leaving Krisha worried. How will Krisha bring Devraj back to normalcy?