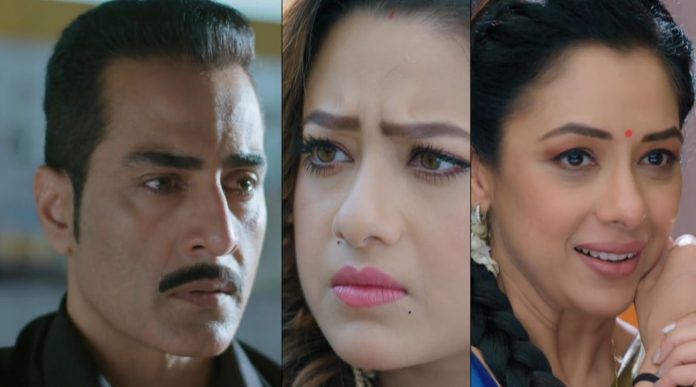 Anupama 7th April 2022 Written Update Vanraj’s revenge Anupama comes to Paritosh’s room with a glass of turmeric milk. Paritosh recalls his friend’s harsh words, his argument and fight with them outside the Shah house. Anupama caresses Paritosh’s hair and asks him if he is fine. Seeing Paritosh ignoring her, Anupama tells him that she knows that he is very angry with her and doesn’t even want to see her face. Paritosh asks Anupama if she knows it all, why she came. Anupama replies because she is a mother. Paritosh asks Anupama to stop her trials as he knows that she hates him a lot.

Anupama asks Paritosh to work hard and change his fate as working hard is in his hands. She also asks Paritosh to have turmeric milk to heal his wounds quickly. Paritosh tells Anupama that her given wounds won’t heal. He also tells Anupama that all this wouldn’t have happened if she would have really cared for him. Paritosh asks Anupama to use the turmeric in the milk for her haldi ceremony. He also asks Anupama to let him be quiet as he will get into an argument with Kinjal, if he will say something to her. Anupama leaves the turmeric milk in Paritosh’s room and leaves.

On the other hand, Malvika calls Anuj and GK smart for calling her back using Anuj and Anupama’s marriage. Anuj asks Malvika to see what all her brother has to do to meet her. Malvika apologizes to Anuj for whatever she did with him and Anupama in the past. Anuj tells Malvika that he will beat her if she will apologize. Malvika says she did something that she needs to be beaten by him. She reveals to Anuj and GK that she repented for her mistake by firing Kavya, Vanraj and Paritosh from her company, before meeting them. Shocked Anuj tells Malvika that now only Paritosh and his friends’ issue/drama happened.

Malvika accepts that her timing was wrong but she was very angry and wished to kill someone. She says she wanted to meet Anupama and apologize to her. Anuj hugs and tells Malvika that it’s alright as he understands her anger. He fears about Vanraj and Baa’s reaction after all this. Anuj also feels scared about his and Anupama’s marriage completion. At Shah house, Kavya breaks down, fearing how the expenditure of Shah house will be handled as now even she, Vanraj and Paritosh lost their jobs. She also fears Vanraj’s mood swings. Kavya thinks she will go mad living in Shah house.

Rakhi calls Kavya. Kavya recalls Rakhi’s words about financial help. She picks up her call. Rakhi apologizes to Kavya for calling her late at night. She requests Kavya to check her ring if she forgot it near the washbasin of Shah house. Noticing Kavya’s cries, Rakhi asks her what happened. Kavya tells Rakhi that Malvika came and fired Shahs from her company. Rakhi gets shocked. Kavya cries profusely saying that she doesn’t have a family, money, respect and job. She says she just had a house in her name, which she gave to Anirudh for Vanraj. Kavya says even Vanraj doesn’t talk to her. She asks whom she should share her pain and sadness with as she has nobody.Rakhi smirks. On the other hand, Paritosh sees Kinjal returning and rudely asks her why she came so late. He reminds Kinjal that he lost his job and got wounded. Kinjal tells Paritosh that he didn’t get much wounded and moreover she didn’t want to talk to him in his bad mood. Paritosh asks Kinjal to say the truth that she didn’t want to spoil her mood by discussing his problem. Kinjal tells Paritosh that he would have done the same thing, screamed out his anger at her even if she would have talked to him. Paritosh asks Kinjal how she could hangout with Malvika, who fires him from the job.

Paritosh tells Kinjal that he doesn’t exist in her life as only Anupama and her upcoming child is her priority. Kinjal tells Paritosh that if this is the truth, then she wouldn’t have been living at Shah house with him. Kinjal tells Paritosh that she understands his problem that he doesn’t have a job now and his child is coming to the world soon. Paritosh misunderstands Kinjal and thinks that she is taunting him for being jobless just like Kavya used to taunt Vanraj. Both of them indulge into a big argument. In this fight, Kinjal by mistake gets pushed by Paritosh on the bed. Both of them get scared for a while.

Paritosh apologizes to Kinjal and says that he didn’t do it on purpose. Kinjal says she knows it. Paritosh asks Kinjal if she is fine. Kinjal tells Paritosh that a person in anger unintentionally hurts their loved ones. She asks him to drink the turmeric milk Anupama kept for him. Before leaving the room, Kinjal warns Paritosh to support the right person as he still has the time for it. She tells Paritosh that maybe he won’t be able to handle anything or forgive himself later on. Paritosh feels shocked, scared and vulnerable. On the other hand, electricity goes off. Anupama finds a firefly in her room and smiles. She says MaAn’s marriage is not a firefly but a sun of hope.

Anupama also says that this sun’s light will prick in many people’s eyes but this sun will rise and bring a good morning for sure, whether anyone likes it or not. Next morning, Baa snatches dhoop from Anupama and starts spreading it all around the house, herself. Vanraj comes outside and asks for tea from Kavya. Paritosh also ignores Anupama harshly. Even Pakhj tries ignoring Anupama. Anupama also ignores feeling bad. Sitting aside, she chats with Anuj, which makes her smile. Anuj asks Anupama if she can take out a little for him from her busy schedule. Anupama texts Anuj that she will meet him in the evening.

At Anuj’s house, Malvika tells Anuj that she has called everyone for his marriage discussion. Seeing Anuj blushing, Malvika teases him in front of GK. GK also joins Malvika in teasing Anuj. Malvika tells Anuj that she wants him to see back on his chair, at his position. She requests Anuj to forgive her considering her past mistakes as her childishness and stupidity. Malvika asks Anuj to return and handle the Kapadia empire like before, once again. Anuj refuses the offer, telling Malvika that he promised Anupama that he will work hard and make his own place. He reminds Malvika that he doesn’t like easy journeys and she knows it.

Anuj says he just started the journey of becoming a hero from zero and can’t accept defeat so easily. He tells Malvika that he is enjoying fighting once again. Anuj requests Malvika to not snatch this opportunity from him as life doesn’t give another chance to everyone. Anuj tells Malvika that he will think about returning to Kapadia empire, once he proves himself and fulfills the promise he made to Anupama. He tells Malvika that he isn’t worried about the Kapadia empire as he trusts her capabilities. Malvika says Anuj has loved only Anupama since last 26 years and on the other hand Anupama has been living in the house, where she gets tortured daily. She asks GK how can someone have this much patience.

GK explains to Malvika that love teaches everything to a person. He tells Malvika that making and breaking relations is easy but to fulfill relation’s responsibility is very tough. GK explains to Malvika that relations are alive today only because of people like Anuj and Anupama. He says people think that humans like Anuj and Anupama are weak but in reality they are the strongest. Malvika calls Anuj and Anupama as lightworkers. At Shah house, Kinjal gets shocked, seeing Paritosh requesting/begging Rakhi to give a last chance and a job, using their baby as an emotional weapon.

Kinjal feels disgusted on realizing that Paritosh doesn’t have any self respect. She gets worried on knowing that now Rakhi got to know that Kavya, Vanraj and Paritosh don’t have a job anymore. She fears that now Rakhi will surely use this as an opportunity to trouble everyone. Kinjal feels angrier thinking why Paritosh is like this. Anupama serves breakfast to everyone, and instructs Bapuji about everyone’s medicines. She also tells Pakhj that she kept her and Samar’s burger in the microwave as it’s their burger day. Anupama at last asks Samar to reach the academy as soon as possible as there is a lot of work to do over there. She also reminds him of the video that they have to send.

In the next episode, Anupama will tell Anuj that she understood that the biggest happiness lies in small things too. Vanraj will tear the termination of the partnership document in anger. Rakhi will advise/suggest worried Kavya to first think of a job and then take divorce. She will strongly suggest to Kavya to divorce Vanraj and get out of Shah’s mad house. Vanraj will seem very angry.

Reviewed Rating for Anupama 7th April 2022 Written Update Vanraj’s revenge: 4/5 This rating is solely based on the opinion of the writer. You may post your own take on the show in the comment section below.