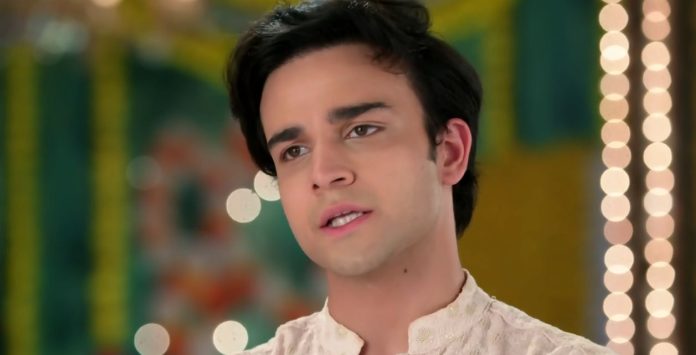 Kumkum Bhagya 8th April 2022 Written Update Big News Rhea asks Ranbir why did he take the risk by calling the police. Ranbir doesn’t answer her. Prachi goes to speak to her doctor. She tells Dr. Madhu that something has happened with her, so she wants a checkup to be done. Madhu tells that everything is good if she doesn’t have any pain or anxiety. She asks her to come for checkup after two days. She tells that she has to leave for a conference, so her assistant Dr. Kanchan will check Prachi.

Prachi doesn’t feel safe in her own house. She grows worried thinking if Ranbir didn’t save her, then anything could have happened to her baby. She realizes that he saved her even after he freed her from their relation. Shahana meets her. Prachi asks her not to question why is she sad. Shahana tells that Prachi doesn’t look upset, but overwhelmed. She is upset thinking of the attack. Prachi wants to ask the culprit why does he/she want to harm her, when she doesn’t wish bad for anyone. Shahana tells that someone would be hating Prachi so much.

Earlier in the show, Ranbir is shocked to know that someone from his family doesn’t want to see Prachi alive. He asks Inspector why didn’t he say this inside the house. Inspector tells that his family members are dual faced, they have a mask on their face, Ranbir should identify them, the culprit had hired Nick for the murder. Ranbir tells that Nick had told this, but he can’t find out who has done this. Inspector tells that he came to tell the truth outside so that the culprit doesn’t get alert. He asks Ranbir to stay alert and try to catch the culprit when he/she makes a mistake again. Ranbir thanks the Inspector. He grows worried for Prachi. He looks at his family with suspicion-filled eyes.

Ranbir meets the Inspector to file the FIR. Inspector asks Ranbir about Nick. Ranbir tells that he remembers his face well. He goes to the sketch artist to get Nick’s sketch made. Inspector tells that their person can help them in finding that man. He asks Ranbir if he knows the informer, many such informers live between common people. Nick gets worried when someone comes home to meet him. Preeti meets him. She tells him that his greed will ruin him, police is after him, he will get stuck in a big case. She asks what about their marriage. She beats him in anger.

He asks her what will Prachi do to him. She tells him that Ranbir loves Prachi a lot, he will not spare Nick for attacking Prachi, Aaliya and Rhea will get saved somehow, they will not even pay him because he failed in the task. Nick tells that he will get the money. Preeti tells that Rhea is Prachi’s sister, if she can kill her sister, then she can kill him too. She asks him to not get involved in these matters. He tells that he will get money from Rhea. Ranbir tells the Inspector that his parents can never harm Prachi. Inspector tells that he has seen it many times, the family member is the culprit. He wishes that Prachi stays safe until the attacker is caught.

Ranbir goes to get help from the sketch artist. He gets Nick’s sketch. The informer checks the picture. Constable tells that Nick was recently arrested, but his file got burnt. Inspector asks him to find Nick in two days. Ranbir wants to find out who has sent Nick to their house. Nick sends Ranbir’s picture to Rhea. She calls him. Nick takes a disguise and stays around the house. He tells that he has sent Ranbir’s picture to get her attention. She scolds him. He gets angry and asks her to mind her language. He blackmails her. She asks him not to go in front of Ranbir.

Nick meets Rhea in the house. She doesn’t identify him in disguise. She gets scared. He tells that he can go to Ranbir if she doesn’t pay him money. Rhea tells that the work didn’t complete. She sees Ranbir and asks if he has filed the FIR. Ranbir goes away. Nick threatens her. He tells that he has done her work, but Prachi is still alive, Ranbir had saved Prachi, and now police is also after him. He tells that he wants money to save himself after the arrest. She asks him to go to Ranbir and tell him everything, she will deny knowing him. She tells that Ranbir will believe her.

Nick tells that he recorded a video when Aaliya and Rhea gave him the contract of murdering Prachi. She is shocked to know this. He tells that he will come at night to collect the money. He leaves. Aaliya asks Rhea why is she worried. Pallavi tells that Rhea is bothered that Ranbir has saved Prachi. Aaliya tells that she will find out. She thinks Rhea has something to say. Pallavi wants to stop Ranbir and Prachi from coming close. Prachi gets food for Ranbir. He tells that he had food outside. He thanks her. She asks him to not send back the food. He asks why is she behaving strange. She asks him to talk nicely. He tells that he isn’t upset because she isn’t convincing him, he is angry on himself, not on her.

He feels tired of fixing the spoiled relations. She tells that time can change, but relations and feelings can never change, people can suppress feelings, but it still stays. She tells that she can’t leave the house, she wants to stand by her decision, she can’t separate him from his family. He tells that she doesn’t want to stay with him. He shows the mirror to her and tells that she is his family. He asks her not to tell anything now, time changes, but relations and feelings don’t change. She thanks him for saving her. He tells that he will always protect her. He thanks her for the aid. He eats the food kept by her. He prays for the day when he dines the food with her. He wants to find out the culprit.

He tells that he will not let another attack happen on Prachi. Aaliya stops Rhea from committing suicide. Rhea cries and tells that Nick has threatened her that he will tell the truth to Ranbir, she is going to get exposed tonight. She tells that he is blackmailing her, he has a video evidence against them. Shahana tries to hear their conversation. Aaliya gets worried. Rhea tells that she doesn’t have money, she has nobody with her. Aaliya tells that she has money to give her. She asks Rhea not to worry. She calls Aaliya. The informer finds out Nick’s address and informs the Inspector.

Aaliya asks Nick to not talk to Rhea, and come on time to get the money. Nick tells that he will meet her at night. Aaliya takes Rhea with her. Shahana wonders what were they talking, who are they going to pay. She thinks if they had hired the attacker. She runs to tell this to Ranbir. She thinks to follow Aaliya and Rhea, gather proof and then go to Ranbir. Nick is excited to get the money. The informer tells that Nick is going to take money from the person who hired her. Inspector wants to call Ranbir and inform about the strong lead. Prachi thinks of Ranbir.

Reviewed Rating for Kumkum Bhagya 8th April 2022 Written Update News for Ranbir: 4/5 This rating is solely based on the opinion of the writer. You may post your own take on the show in the comment section below.