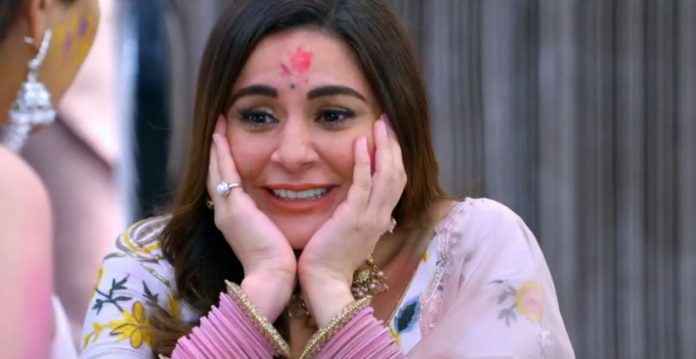 Kundali Bhagya Spoiler Upcoming 8th April 2022 Shirleen tells an intoxicated Preeta that her sister Natasha and Karan will do something together which she and Karan are not able to do. Preeta smiles and Shirleen informs her that she means the first night. Preeta stares at Shirleen and slaps her. Shirleen is shocked and doubts if Preeta is actually drunk or not? Will Preeta unmask the bad intentions of Shirleen and Natasha?

Anupama gets ready and feels that Anuj is the person who taught her to find happiness in small things. Anuj also gets decked up. Vanraj cries and tears his termination letter. Rakhi suggests Kavya to take a step. Kavya is clueless. Rakhi tells her to think about a job first and then file for a divorce. Rakhi advises Kavya to become free from the mental asylum of Shah house. Vanraj throws away the pieces of termination letter in the air. What will angry Vanraj do this time? Will Kavya take Rakhi’s advice?Yeh Jhuki Jhuki Si Nazar episode spoiler – Diya’s confession:

Armaan tells Diya that he will believe whatever she said only when she looks into his eyes and expresses it. Armaan makes Diya face him. Armaan knows the fact that Diya’s eyes and Diya tell two different things. Armaan confronts Diya and reveals that he knows she has feelings for him but doesn’t admit to it. Armaan desires to listen to Diya’s confession. He requests her to tell everything. Diya gets ready to speak to Armaan. Will Diya express her feelings to Armaan and betray her sister Palki?

Krishna falls on Saroj’s legs and requests that a mother can do anything for their children. He pleads with her to finish off the bitterness. Saroj says that her decision will not change. Chiranjeev says that his decision is also final. Saroj is shocked. Saroj pours water on Chiranjeev and says that she is dead to him now. Sayuri, Krishna, Indrani, Bhanumati, and Dhanraj are shocked. Chiranjeev cries and feels helpless. Krishna and Nakul try to pacify Chiranjeev. Will Saroj’s behavior break her relationship with Chiranjeev forever?

Dev’s friend informs him that the boy he was searching for is Saaransh Khurana. Dev gets angry. Alia and Saaransh spend some time together and eat ice cream. Alia and Saaransh shake hands. Dev feels that the whole of the Khurana family is unlucky for him but vows to destroy everyone. He plans to do something big. Rudraksh tells Preesha that when she and Ruhi are with him then he doesn’t need anything. Rudraksh assures Preesha that nobody can separate them now. Yuvraj plans to drop his bomb. Saaransh gets hurt in school the next day. How will Preesha save the Khurana family from Dev and Yuvraj?