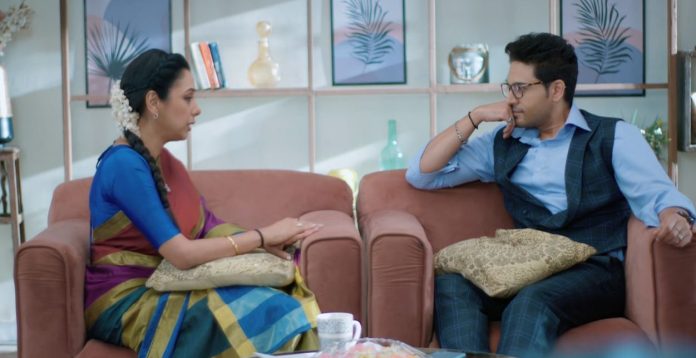 Anupama 8th April 2022 Written Update Hearty talk Anupama lights a diya in the academy. She receives a parcel. After opening the parcel, she will get happy seeing and smelling the gajra inside it. On the other hand, Anuj is also seen happily changing up in formal wear. “Zindagi Ban Gaye Ho Tum” plays in the background. Anupama wears the gajra in her hair and sends her picture to Anuj. Anuj gets very happy on receiving Anupama’s photograph. Anupama thinks that it’s Anuj who made her realize that, “small things can make us feel immensely content”.

Anuj receives tea flask and Anupama’s text. Through the text, Anupama tells Anuj that she sent it because he likes tea made by her. Anupama wishes, “All the best” to Anuj for his meeting. Anuj also sends his selfie with Anupama’s tea to Anupama. This makes Anupama happy. At Shah house, Baa gets angry at Kavya for lying on bed and not performing her daughter-in-law duties. She tells Kavya that since morning, Vanraj is calling out for her and here she is relaxing on the bed. Baa also tells Kavya that even after whatever happened, Anupama left after completing the whole household work but she (Kavya) doesn’t care.

When Kavya doesn’t retaliate, Baa tells her that even a corpse would open eyes to see who is taunting him/her, but she doesn’t care. She asks Kavya if she has completely lost it. Kavya requests Baa to leave her alone. Baa tells Kavya that she and Anupama will together kill her and Vanraj. She leaves angrily. Kavya receives Rakhi’s message telling her that she gotta know whatever happened and asks her to meet her. On the other hand, Anupama is seen leaving the academy packing her bag but stops on realizing that someone is in the cafe. She goes towards the cafe and witnesses a disappointed Vanraj.

She thinks a person has to pay for his/her deeds in the same life only. Anupama wishes and hopes that this time, Vanraj learns from his mistakes and understands this thing. She prays to God to give courage to Vanraj to endure the punishment for what he has done. Anupama also prays to God to give wisdom to Vanraj, so that he may never turn to the wrong path again. On the other hand, Rakhi tells Kavya that she may be disgusting and horrendous but she speaks the truth. She also tells Kavya that Vanraj has only two things, first his father’s house and second his big fat ego.

Rakhi says Vanraj lost a golden opportunity by being egoistic and lost everything. Kavya says she understands it and always tries to comprehend Vanraj. She tells Rakhi that comprehending Vanraj is as equal to advising a super fit and super toned OX. Rakhi asks Kavya if she will remain relying on her husband or will she herself do something too. She tells Kavya that she herself will take care of Kinjal, Paritosh and her upcoming grandchild. Rakhi says she can help Vanraj too but being a middle class egoistic man, he won’t accept it. She asks Kavya what she thought about herself.

Rakhi tells Kavya that she feels pity about her as she was such an independent, career oriented and strong headed girl. She also tells Kavya that she became a poor housewife after marrying Vanraj. Kavya tells Rakhi that she is right as she (Kavya) hasn’t felt this helpless ever. She asks Rakhi what she should do as she doesn’t have a secure job. Rakhi tells Kavya that she can even provide her a job, if she wants it. Kavya gets into thinking. On the other hand, Anuj returns home and sees Anupama in the kitchen. He apologizes to her for returning late.

Anupama tells Anuj that he didn’t get late, others haven’t arrived till now. Anuj tells Anupama that it’s mind-blowing that only two of them are alone at home. He also tells Anupama that for the first time he is loving late comers. Anupama asks Anuj to sit outside as she is making food for others. She says that others must be on the way. Anun expresses his desire to help Anupama in the kitchen and spend some time with her before marriage ceremonies take place. He tells Anupama that as the marriage ceremonies will start, everyone will start their drama that the groom (boy) and bride (girl) can’t meet. Anupama asks Anuj if he meant uncle and aunty and teases him. Feeling teased, Anuj asks Anupama to shut up.

He leaves outside to sit and wait for others. On the other hand, Rakhi tells Kavya that she knows what she is thinking about. She asks Kavya to not think what Baa and Vanraj will say or think on knowing that she is working for her (Rakhi) as even Shahs doesn’t even think this much about her. Rakhi tells Kavya that Kinjal and Paritosh’s future is secure as she is with them. She says even Anuj and Anupama’s life is set as they have Malvika with them. Rakhi keeps on manipulating Kavya by telling her that her future is at risk as Shah house’s expenditures are more than the source of their income.

She also tells Kavya that Shahs don’t consider her important, even equal to their sofa. Rakhi asks Kavya to make a decision for herself. She suggests Kavya to hunt for a job and then get divorced. Rakhi asks Kavya to divorce Vanraj and come out of Shah’s mad family. She also asks Kavya to decide who she wants to be; old Anupama or old Kavya. On the other hand, Anupama brings tea/coffee for Anuj. Anuj looks at her with love. Anupama gets shy like a young girl. Anuj burns his tongue with hot tea/coffee and laughs with Anupama. “Singaar Ko Rehne Do” plays in the background. Both Anuj and Anupama drink tea/coffee from the same mug.

At the cafe, a frustrated and disappointed Vanraj will tear the termination of partnership documents/papers. Anuj and Anupama will receive calls but will turn down their phones. Anuj will ask Anupama how her day went. Anupama tells Anuj that today was Pakhi and Samar’s burger day. She says that on seeing potatoes, she understood that Samar would have brought them. Anupama also shares with Anuj how Samar makes fun of her saying that she can’t pronounce potatoes well. Anuj gets a little shocked hearing Anupama’s pronunciation of “potatoes”. She tells Anuj that she tells Samar that even on correctly pronouncing potatoes, he doesn’t buy good potatoes from vegetable sellers.

She says Samar still can’t buy good potatoes. Anupama also shares her mixer grinder experience of Shah house with Anuj. Seeing Anuj’s expressions, she asks him what happened. Anuj tells Anupama that even in today’s modern times they are one of the lucky people, who can talk their heart out to each other, sitting together. Anupama says she was just talking about potatoes. Anuj tells Anupama that whatever the topic is at least they are talking to each other, sitting together. Anupama tells Anuj that he is right. She says the phone has taken the camera and calendar’s place. Anupama says she fears that one day phones may replace the family.

She says once a week, people should lock their phones in the cupboard and spend this one day with their family. Anuj asks for updates on Shah house from Anupama. Seeing Anupama’s expressions, Anuj says he understood that the situation in Shah house is the same as usual. He says he understands that Malvika’s decision would have created a big drama in Shah house. Anuj asks Anupama to not misunderstand him as a wrong person as he feels that Malvika took the right decision. Anupama tells Anuj that Malvika took a 100% right decision. She says she just feels bad for the Shah family, not Vanraj. Anupama says the family always pays for Vanraj’s mistakes.

Anupama says that she doesn’t feel like rectifying or sorting Shah’s issues anymore. She says it isn’t worth the effort to do something, knowing that it won’t work. Anupama says she feels that life is like ludo and family living as the pawns of the same color. She says that the pawn at the back can’t protect the other pawn walking forward from getting cut. Anupama tells Anuj that the same above way, being Pakhi and Paritosh’s mother she can guide them through life but she can’t live their lives on their behalf. She says one has to lead his/her life on their own. Anuj agrees to Anupama’s words. Anupama tells Anuj that many times she tries to stop thinking about the Shah family but fails.

In the next episode, Baa will call Bapuji and tell him that he is only thinking about Anupama, not Vanraj. Before she could express her fear that Vanraj may take a wrong step, Bapuji will disconnect the call asking Baa to do what pleases her. Bapuji will explain to Anupama that, “if a man’s ego gets hurt, he may also lose his life”. Baa will ask a disappointed Vanraj if he has any business idea. Vanraj will tell Baa that he fails miserably in everything and every time. Baa will offer to talk to Malvika about Vanraj. At the office, Malvika will ask Anupama why she asked Anuj to talk to her about Vanraj. Anupama will tell Malvika that she doesn’t have any clue about it. Anuj will come from behind and will say that he will answer this question.

Reviewed Rating for Anupama 8th April 2022 Written Update Hearty talk: 4/5 This rating is solely based on the opinion of the writer. You may post your own take on the show in the comment section below.