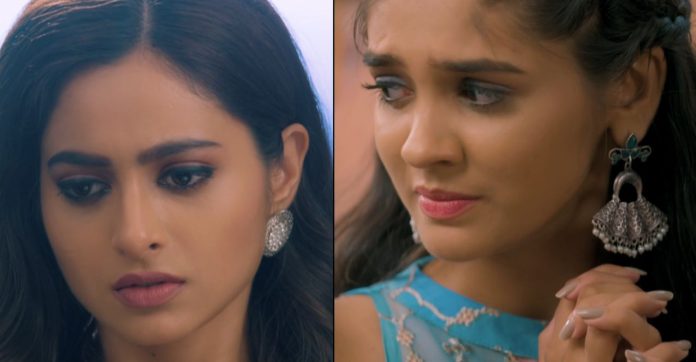 Yeh Rishta 8th April 2022 Written Update Guilt trip Even on Aarohi’s pleadings, Akshara won’t stop. She runs to tell the truth to Abhimanyu. Aarohi trying to stop Akshara also runs behind her. She follows Akshara’s car also to stop her. On the other hand, Abhimanyu reaches the hospital and marks his attendance. While following Akshara’s car, Aarohi requests Akshara to listen to her once. Akshara refuses to listen to anything from Aarohi. Aarohi asks Akshara why she is doing this with her. Akshara starts driving fast. At hospital, Abhimanyu receives his private investigator’s call asking him to check the accident footage he sent. He disconnects the call saying two people were there.

Aarohi requests Akshara to stop, saying that everything will get ruined. Akshara asks Aarohi to stop following her as now she can’t stop her from revealing the truth to everyone. She thinks that she can’t hide this truth from Abhimanyu and needs to tell him about it. Akshara says she wants to tell Abhimanyu this truth, before he gets to know about it from someone else. She feels apologetic towards Abhimanyu for hiding about her accident from Abhimanyu. Akshara says she won’t hide about Manjiri’s accident from Abhimanyu. She says, “I am coming to you Abhi”. Flashbacks of Manjiri’s condition at the accident spot and in OT are shown. Abhimanyu is seen watching the footage of Manjiri’s accident spot, sent to him by his private investigator.

He seems very angry. On the other hand, Aarohi keeps on trying to stop Akshara but the latter refuses to hide the truth from Abhimanyu. At the hospital, an intern/doctor tells Abhimanyu that he has prepared the video room that he asked him to. This intern/doctor tries to wake up an angry Abhimanyu from his thoughts. Akshara reaches Birla house. Aarohi also follows her. Akshara taps the door and rings the bell of Birla house. She screams and requests to open the door. Aarohi tries to stop Akshara. A servant opens the door and tells Akshara that Abhimanyu went to hospital and all other family members went somewhere outside.

Akshara tells Akshara to see it’s a sign in her language, asking her to stop. Akshara tells Aarohi that she doesn’t care if it’s a sign and doesn’t need it. She says she just wants to talk to Abhimanyu. Aarohi snatches Akshara’s car key to stop her from reaching Abhimanyu and revealing him the truth. Akshara snatches her car key back from Akshara. Abhimanyu on the other hand, tries calling someone again and again. The intern/doctor comes to Abhimanyu’s cabin and asks him to come fast as everyone is waiting for him. Abhimanyu angrily says that he isn’t passing time here and knows that it’s important for him too. He asks the doctor to handle till he reaches.

She says maybe Abhimanyu called Akshara for some other reason. At hospital, irritated Mahima and Harsh discuss that surely Abhimanyu planned something related to Akshara. Harsh says he hopes this better be important. Akshara and Aarohi reach the hospital. They get shocked and scared seeing both Goenka and Birla family in the hospital. Goenkas discusses that they just got a message asking them to come to the hospital, leaving everything. Birlas also reach and Neil says Abhimanyu called them to see something. Manjiri says Abhimanyu seemed tense on call. This scares Aarohi and Akshara.

Akshara also crosses her fingers and walks towards the video room. Scared Aarohi follows Akshara. Abhimanyu recalls his pain of seeing his mother in worse condition due to her accident. Sacred Akshara and Aarohi recall their accident and Abhimanyu’s anger towards Manjiri’s culprit. Akshara takes Aarohi’s hand and signs her to walk inside and face whatever is ahead. She refuses to understand Aarohi’s pleas and takes her inside the dark video room. Lights arrive and Abhimanyu presents his surprise for Akshara. Goenaks gets surprised to see that Abhimanyu got a music therapy department opened for Akshara in Birla hospital. Harsh and Mahima feel shocked and angry.

Aarohi and Anand feel shocked. While other Goenkas also get emotional and happy. Harsh asks Abhimanyu to explain what is all this. Akshara feels shocked as well as guilty. Flower petals showers on Akshara. Aarohi feels jealous of Akshara. Abhimanyu apologizes to everyone for intentionally not mentioning anything clearly in the message. He says he did all this to surprise Akshara. Abhimanyu says he always felt connected with music. He tells everyone that Manjiri’s lullaby and hand made food always gave him peace and good taste respectively.

Abhimanyu says after a long time, he got the same peace through Akshara’s voice. Flashbacks of Abhimanyu and Akshara’s first meeting are shown. Abhimanyu says he fell for Akshara instantly, when he for the first time heard her voice. He also says that Akshara’s singing touches people’s hearts and heals them. Abhimanyu further says he also didn’t used to believe that music therapy can heal people but started believing it after getting first hand experience himself. He says he is talking about Birla hospital’s music therapist, Ms. Akshara Goenka, soon-to-be Mrs. Akshara Abhimanyu Goenka. He asks everyone to give a round of applause to Akshara.

Everyone except Harsh and Mahima claps for Akshara. Abhimanyu wipes Akshara’s tears and tells her that he opened this music department for both of them and for people who need to heal, not only her. He tells Akshara that good music not only touches hearts but also gives a ray of hope to people. Emotional Akshara thanks Abhimanyu and everyone else. Abhimanyu asks Akshara to handle her department. He also asks Akshara to heal people and end their problems with her music. Abhimanyu calls Manjiri for the inauguration of the music therapy department. Emotional and guilty Akshara runs and hugs Manjiri tightly.

She glares at Aarohi angrily. Manjiri calms emotional Akshara. In a low voice, Mahima rudely says they should also start learning to play music instruments and convert OT into dance theater as patients get healed this way. Harsh and Anand feel angry. Manjiri lights a diya in the music therapy department in front of the goddess idol. Abhimanyu requests Manjari to sing a song for her to celebrate the inauguration of the Department of Music Therapy. Manjiri looks at Abhimanyu and then Harsh. Harsh ignores Manjiri. Abhimanyu understands everything and confidently asks Manjiri to sing.

Manjiri sings bhajan or aarti. While Aarohi feels scared, Akshara feels guilty. Goenkas and Akshara’s supporters in the Birla family feel happy. In the next episode, Abhimanyu will save Akshara from falling down. Akshara will start breathing heavily. Everyone will get worried for Akshara. In the breathless state Akshara will tell Abhimanyu that she wants to talk about something to him. Abhimanyu will ask Akshara to say whatever she wants to say. Before Akshara could confess the truth, scared Aarohi will faint. Shocked, Akshara and Swarna will shout, “Aaru”.

Reviewed Rating for Yeh Rishta 8th April 2022 Written Update Guilt trip: 4/5 This rating is solely based on the opinion of the writer. You may post your own take on the show in the comment section below.