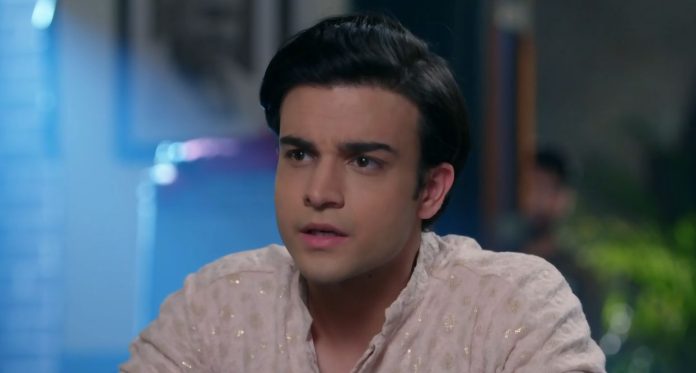 Kumkum Bhagya 11th April 2022 Written Update Trouble for Ranbir Ranbir meets the Inspector at the police station. Inspector tells that he got the information about Nick. He adds that he knows this case is really important for Ranbir, so he has called him at this hour. He asks Ranbir to come along when the police goes to arrest Nick. Ranbir learns about Nick, who is just outside the police station, keeping an eye on Ranbir. Nick angrily goes out and calls Prachi to threaten her. He tells Prachi that if Ranbir doesn’t stop following him, then Ranbir will get attacked this time instead of her. He asks her to trust him, Ranbir will die this time.

Prachi is shocked by the threatening call. She gets worried for Ranbir, who life is in danger. She tries to contact Ranbir and alert him. Nick thinks Ranbir will stop chasing him on Prachi’s words. Prachi thinks of Ranbir, who is following the lead to reach Nick just to safeguard her life. Ranbir doesn’t know the risk over his life. Will Ranbir protect himself and Prachi’s life? Will he learn about Rhea’s evil? Keep reading.

Earlier in the show, Aaliya asks Nick to not talk to Rhea, and come on time to get the money. Nick tells that he will meet her at night. Aaliya takes Rhea with her. Shahana wonders what were they talking, who are they going to pay. She thinks if they had hired the attacker. She runs to tell this to Ranbir. She thinks to follow Aaliya and Rhea, gather proof and then go to Ranbir. Nick is excited to get the money. The informer tells that Nick is going to take money from the person who hired her. Inspector wants to call Ranbir and inform about the strong lead. Prachi thinks of Ranbir.

Prachi looks for Ranbir. She doesn’t see him anywhere. Ranbir reaches the police station and comes across Nick. He recalls seeing him at home with Rhea. He tells that he is the same person who was with Rhea doing the decorations. Nick tells that he was with Rhea. He had come to the police station to secure his future by bribing the constable and dismissing the case. He thinks what is Ranbir doing. Inspector shows Nick’s sketch to Ranbir. He tells that Nick will get caught, its important to arrest him. He asks Ranbir to come with him and see the arrest. Ranbir asks how will they catch Nick. Inspector tells that they will enter Nick’s house and arrest him, if he isn’t at home, then their sources will find him out. Nick gets a shock hearing him. Nick leaves from there and thinks Ranbir has got after him.

Nick calls up Preeti to get Prachi’s number. She asks him why does he want it. He asks her to just send the number if she wants to save him. She sends Prachi’s number to him. He calls Prachi. He tells her that Ranbir is getting out of control, it will be a big problem if he goes out of control and harms Ranbir. He then threatens her. She asks him how dare he threaten her about her husband. He reveals that he had tried to kill her. He asks her to stop Ranbir from following him, then he will also spare her, if Ranbir doesn’t stop himself, then he won’t get spared, he should stay at home and stay safe, else he will lose his life.

Prachi gets worried for Ranbir. Ranbir recalls that Prachi’s life is threatened. He gets worried. Inspector tells that he can see that Ranbir loves his wife a lot. Ranbir tells that his wife Prachi doesn’t think so. Nick wants to get money from Aaliya and Rhea before he escapes. Aaliya asks Rhea to not behave like they are doing wrong, they didn’t steal the money, but got it from the locker. She tells that people will suspect them if she gets scared. Shahana follows them. She wonders what are they doing. Rhea observes a taxi following them. She tells Aaliya that the taxi is following them.

Aaliya asks her to not stress herself. She suggests that Rhea starts on yoga and gets saved from negative thoughts. Shahana thinks that there is no party function at home, so Aaliya would have not taken the jewellery, maybe they have taken the cash for some special purpose. She wonders what is it. Aaliya asks Rhea to think of the reward, that’s Ranbir, she will get him after Prachi leaves from his life. Prachi calls Ranbir and asks him where is he. She asks him why is he not answering her calls. He asks her why is she worried. She asks him to come home. He tells that he has come to find the culprit, its really important. She tells that she knows everything, he should come home.

He asks her how does she know it, what is she hiding. She requests him to come home. He disconnects the call. Inspector gives Nick’s details to Ranbir. Prachi wants to stop Ranbir. Ranbir and police reach Nick’s house and try to find him. Ranbir asks Inspector about his expertise in knowing that he/Ranbir loves his wife, and Nick didn’t get married but has a girlfriend. Inspector tells that he had a girlfriend for eight years and then married her last year, he is with her since the last nine years, he knows her well. Ranbir tries to check the house. He misses to see Preeti’s picture.

Ranbir tells that they can check the cctv camera. Inspector tells that he can get the permissions to get the cctv camera footage. Ranbir tells that he wants to come along and find out the culprit. He accompanies the police. Nick reaches the Kohli house to get the money from Aaliya and Rhea. Nick laughs that there is no security in Kohli house. He hears Vikram and Pallavi coming. He hides from them and hears them arguing about Prachi. Nick thinks they believe Rhea and don’t know her evil truth. Vikram defends Prachi. He tells that Prachi is right and Rhea is wrong.

Nick tells that they don’t know that Prachi is victim and Rhea is the criminal. Nick messages Rhea that he has come. Rhea and Aaliya arrive home and get to see Nick. Shahana keeps an eye on them. Aaliya sees her and takes her name to alert Rhea and Nick. Nick hides. Rhea asks Aaliya not to answer Shahana’s crazy questions and leave. Shahana looks around for some clue. Nick hides inside a cupboard. Prachi calls Ranbir. She tells that he isn’t answering, so he shall leave a message. She messages him to come home. Ranbir gets scared to talk to her. Inspector tells everyone is scared of their wives. Ranbir gets her messages further. He asks Inspector to go, he will meet him at the police station. Inspector tells that its emotional blackmailing that wives do with husbands.

Reviewed Rating for Kumkum Bhagya 11th April 2022 Written Update Trouble for Ranbir: 4/5 This rating is solely based on the opinion of the writer. You may post your own take on the show in the comment section below.