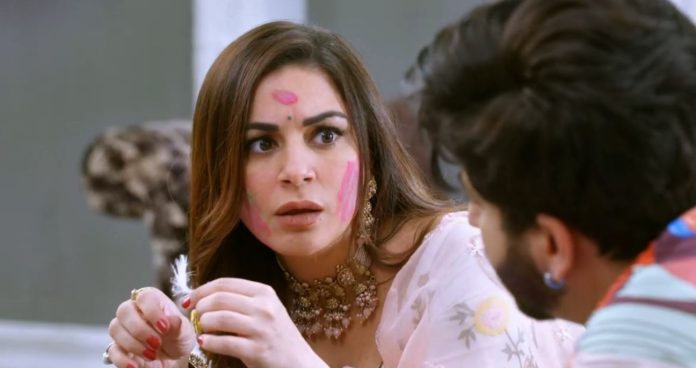 Kundali Bhagya 12th April 2022 Written Update Preeran union Preeta wears Karan’s gloves and angrily tells him that she will punch and break his face if he misbehaves with her or flirts with Natasha. Karan asks what if he doesn’t do so. Preeta tells that there won’t be any problem if he doesn’t flirt and she won’t break his face. They have cute moments. Later, Sherlyn and Natasha are shocked to see Preeta and Karan in the same bed. They can’t believe seeing their intimacy. Sherlyn tells Natasha that their plan has totally flopped.

On the other side, Prithvi tells Naagre that he trusted her, but didn’t know that Naagre will bring such a big loss for him. He rebukes Naagre for being so foolish and getting arrested. He asks Naagre how will he get through now and get him the bail when is also inside the jail. Naagre and Pradeep got arrested from their drunken episode and don’t remember anything. Will Preeta and Karan really come close? Keep reading.

Earlier in the show, Natasha pulls Karan. Karan doesn’t listen. He pushes Natasha and shuts the door. On the other hand, Prithvi tells that he will have a re-entry in the house, Sherlyn will welcome him by an aarti, Preeta will bow down to him, they will serve him like the old times. He imagines his good times. He gets the jail food. He refuses to eat it. Karan and Preeta spend some time together in their room. He tells that she always does the mistake and blames her. He then tells her that he finds her really cute when she gets angry on him. She gets shy and happy by his compliment.

Natasha and Sherlyn try to break the door lock. Pradeep hears them and tells that he can break any door. Naagre tells that women are so talkative, Sherlyn and Natasha are overconfident and think they can break the lock easily. He asks Pradeep to show his talent to the bunch of fools. Pradeep tells that he will prove his talent. Natasha locks a door. She asks him to open the door. Pradeep unlocks it. Naagre praises it. Sherlyn asks Pradeep how can he open the room door that’s locked from the inside. Pradeep asks them for money. She is ready to give any money. He asks for just some money, because he doesn’t want tension to keep much money. Sherlyn tells that she will also come and see.

They get romantically close. Sherlyn and Natasha hide from drunk Naagre and Pradeep. Sherlyn calls someone to send away Naagre. Biji and Janki meet Naagre. Sherlyn asks the person to take away Naagre, he is drunk. Naagre goes away with his driver. He tells that he will drive. Pradeep goes with Naagre. Sherlyn and Natasha get rid of them. They run to see Karan and Preeta. Shrishti realizes Biji and Janki left from the room. She meets Sameer and finds him intoxicated too. She asks him if he is okay. He sings a romantic song for her. He tells that he can handle himself, he has a news for her, his fear has ended, so he has come to her. He tells her that he likes her.

Reviewed Rating for Kundali Bhagya 12th April 2022 Written Update Preeran union: 4/5 This rating is solely based on the opinion of the writer. You may post your own take on the show in the comment section below.