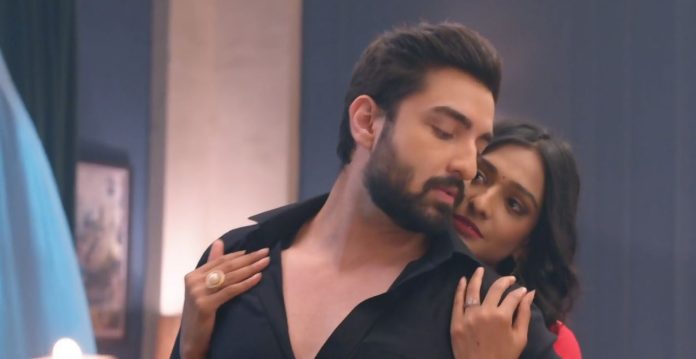 Bhagya Lakshmi 13th April 2022 Written Update Amazing romance Malishka tells Karishma that this time she won’t do any such mistake that’s done in the past. She tells that this time Lakshmi will see her Sautan, not any friend. Dadi tells Virender, Rishi and Ayush that Lakshmi might be planning something. Neelam asks Lakshmi and Rishi to come for the post wedding rituals. She takes them to play the ring finding game. She tells that it’s the last rasam, they shall finish it soon. Dadi asks Lakshmi and Rishi to play thrice, the person who wins the most of the times will be the winner. Rishi tells that he will win. He plays with game unwilling, because he has developed hatred for Lakshmi.

Rishi loses the game, while Lakshmi finds the ring. She becomes the winner who would rule over Rishi and family. Lakshmi tells Malishka that whoever wins, husband and wife win together, she will win if Rishi wins, and Rishi will win if she wins. She tells that she has nothing to do with Malishka’s thinking. She lectures Malishka on the rights shared by a couple. She tells that they both will rule over, and then the entire family will be in a ruling situation. Malishka imagines Rishi and Lakshmi’s romance on their first night together post the divorce hearing. She goes mad thinking of them.

Dadi and Virender are also upset with Lakshmi. Shalu stops Rishi for the famous rasam of finding the ring. Rishi tells that he will do it to make a video for the judge. Malishka gets upset. Karishma follows Malishka. She asks Malishka to wait. Malishka tells that Neelam is welcoming Lakshmi in the house. Karishma tells that Neelam and Rishi are helpless, they aren’t fools. She tells that they are following the court orders, they have to show the videos to the judge. Malishka gets too upset. Karishma tells that Lakshmi will win just today, but she will lose every day. She asks Malishka not to ruin everything because of her kiddishness. She tells that the entire family will be winning every day.

She asks Malishka to focus on Rishi and be around him like a shield. Malishka takes her advice. Lakshmi asks Shalu what is she doing. Shalu and Bani enjoy the nice house welcome ritual. Lakshmi asks them not to threaten everyone by taking the judge name. Lakshmi tells that they will not tell about any other rasam now. She takes Rishi’s side. She doesn’t want to anger him more, knowing he is already upset. Dadi suspects that Lakshmi is planning something, she has won the case, she wants to win in the ring finding ritual too. Neelam asks them to come for the ritual.

Dadi asks Neelam to explain the rasam rules to Lakshmi, else she can complain later. She tells that whoever wins the rasam will win in the life as well, they have to play thrice and the majority winner wins. Rishi and Lakshmi play the game. Lakshmi finds the ring first and then Rishi finds it. During the third round, Rishi finds the ring. He tells that he already told that he will win. Virender and Ayush leave for office. Malishka taunts Lakshmi for losing the game. Lakshmi lectures her about the rights shared by marriage couples. Malishka controls her temper.

She asks Neelam did she hear it. Neelam tells that Malishka has started it. she asks Malishka to make sure that she wins in the argument next time. Dadi tells that everyone would have stayed happy if Malishka didn’t suggest the divorce. Malishka tells that its Rishi’s fault. Shalu likes Lakshmi’s befitting reply to Malishka. She doesn’t like Malishka. Shalu asks Lakshmi if she loves Rishi. Malishka hears them talking. She gets angered hearing that Lakshmi loves Rishi and wanted to be with him. Shalu and Bani tease Lakshmi. Lakshmi blushes. Malishka angrily walks into Rishi. She blames him for doing the wrong. She tells that Dadi is blaming her for the divorce drama.

She asks him to take a stand for her, not for Lakshmi. She tells that she wants to get free of the blames. She tells Rishi that he is a good human being, but Lakshmi is taking an advantage of the situation. Rishi tells her that Lakshmi can never spoil anything, he will trouble her. Lakshmi asks her sisters to stop teasing her. Lakshmi tells that they should go home now. Shalu advises her to take the judge’s name and threaten Malishka. She tells that Lakshmi can command Rishi as well. Lakshmi doesn’t want to upset Rishi. Shalu and Bani leave for home. Lakshmi meets Rishi.

She finds his boxing bag in the room. She asks him what is it doing in their room. He tells that its his friend Sumo. He vents anger on her and tries to make her leave the room. She understands his intentions. She tells that she has no problem to stay in the room. Rishi tells that he really wanted to divorce her, but the judge misunderstood him. Malishka imagines Rishi and Lakshmi’s sensuous romance. She can’t stand the sight.

Reviewed Rating for Bhagya Lakshmi 13th April 2022 Written Update Amazing: 4/5 This rating is solely based on the opinion of the writer. You may post your own take on the show in the comment section below.