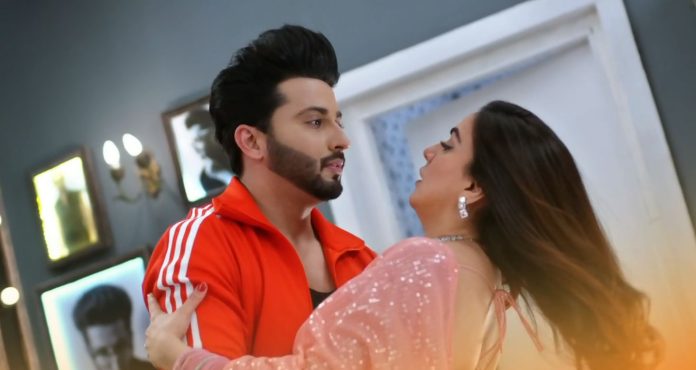 Kundali Bhagya 13th April 2022 Written Update Preeran back Karan and Preeta have a cute moment, after the holi night spent together. They get ready in their room. He corrects her bindi and holds her close, saying the bindi wasn’t in the center, so he had to fix it right. He tells her that he had a special time with her which he will always remember. Preeta collides with him and ends up falling in his arms. She thanks him for saving her from the fall. They get into their happy zone. Sherlyn and Natasha conspire once again. Sherlyn tells that she will separate Karan and Preeta, she is waiting for a right chance. To Preeta’s gratitude, Karan replies that he will always save her, as he has promised her. They stand near the mirror and see themselves, smiling and appearing really happy together. What will Sherlyn do now? Keep reading.

Earlier in the show, Preeta and Karan get romantically close. Sherlyn and Natasha hide from drunk Naagre and Pradeep. Sherlyn calls someone to send away Naagre. Biji and Janki meet Naagre. Sherlyn asks the person to take away Naagre, he is drunk. Naagre goes away with his driver. He tells that he will drive. Pradeep goes with Naagre. Sherlyn and Natasha get rid of them. They run to see Karan and Preeta. Shrishti realizes Biji and Janki left from the room. She meets Sameer and finds him intoxicated too. She asks him if he is okay. He sings a romantic song for her. He tells that he can handle himself, he has a news for her, his fear has ended, so he has come to her. He tells her that he likes her.

Sameer reminds Shrishti about their first meet. He tells that he knew she is naughty and wanted to teach her a lesson, but gradually, he started liking her, even then she troubled him a lot, she makes mistakes but he says sorry. He admits his feelings to her. He tells Shrishti that he likes her a lot, he wants to spend time with her, he really likes her and also loves her. He hugs her. He falls over her. She asks him to get aside. She finds him falling asleep. She gets shy after his confession. Kareena, Janki and Biji get into a funny talk. Rakhi joins their crazy conversation.

Rakhi tells them that Karan and Preeta will be giving her a little granddaughter soon. She asks Kareena is she listening. She finds Kareena sleeping. She hugs Kareena. She dreams of becoming a Dadi soon. Natasha tells that she is sure that Karan would be sleeping by now. Sherlyn asks her not to talk negative. Natasha asks her if she feels proud of her crimes. Sherlyn tells that she is still ruling in the house. She asks Natasha to spend the night with Karan, Luthras should know that Karan and Natasha have spent the night together. They barge into Karan’s room.

They see Karan and Preeta sleeping together. Sherlyn leaves in anger. She tells that their plan flopped, Karan and Preeta shouldn’t know whatever happened between them, their closeness means that they still love each other. She warns Natasha that if Prithvi knows this, then he will throw out Natasha from the house. Prithvi gets into an argument with the constable. He praises Naagre. He tells that everyone is scared of the number one lawyer Naagre. He hopes that Naagre comes and bails him out. He is shocked to see Naagre and Pradeep arrested by the police.

Naagre tells that the car hit the wall on his own. Prithvi finds them drunk and uttering nonsense. Prithvi scolds them and asks them about his important papers. They don’t remember anything. Prithvi throws them on the floor and yells at them. He tells that he had sent them to steal the business papers, but they came back drunk like losers. He loses his temper. Karan and Preeta wake up and remember the romantic night spent. Preeta feels shy. She tells that she has to go and get ready. They get into a moment. Prithvi is sorrowful. He gets to hear the taunts from the constable.

He asks constable to leave him alone. Constable calls him a headache. Naagre and Pradeep wake up. They face Prithvi and also his anger. Prithvi rebukes them for losing out on the perfect plan. He tells that they could have kidnapped Preeta, but they lost terribly. Naagre assures that he will bail out himself and also Prithvi and Pradeep. Prithvi asks him not to lose this time. Karan tells that Preeta is his wife, its his right on her. Preeta gets ready and comes to him. She asks Karan what is he saying about his rights. He gets speechless.

Reviewed Rating for Kundali Bhagya 13th April 2022 Written Update Preeran back: 4/5 This rating is solely based on the opinion of the writer. You may post your own take on the show in the comment section below.