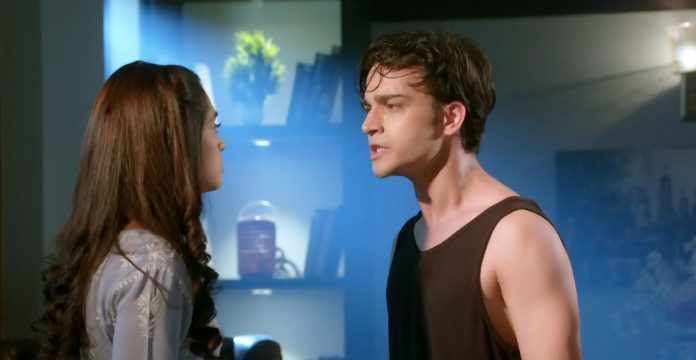 Kumkum Bhagya Ranbir catches Nick 14th April 2022 Spoilers Kumkum Bhagya episode spoiler – Ranbir catches Nick Nick is lying on the floor. Ranbir tells Prachi that the person who is trying to kill her is present in their own house. Rhea and Aaliya feel intimidated. Ranbir tells that till Nick doesn’t reveal the person’s name he will not let him go. He is determined to find out about the person. Rhea gets panicky. Aaliya tells Rhea that they have to remove Nick from here so that he doesn’t get caught. Rhea shakes in fear. Ranbir feels relieved and hugs Prachi endearingly. Prachi also reluctantly hugs Ranbir back.

Bhagya Lakshmi episode spoiler – RishMi in the same room Rishi sleeps on the sofa and falls down. Lakshmi gets worried. Malishka asks Kirron if Rishi and Lakshmi won’t be sleeping in the same room. Lakshmi calls Rishi clumsy and asks him to sleep on the bed but he refuses. Shalu advises Lakshmi to convince Rishi by taking judge madam’s name. Lakshmi tells Rishi that judge Rukmani Vishwanath has ordered them to give another chance to their marriage and stay together. Rishi sleeps on the bed. Malishka asks Neelam to check if Rishi is sleeping alone. Neelam tells that Rishi and Lakshmi are sleeping together on the bed. Malishka is flabbergasted.

Mithai episode spoiler – Karishma-Mithai’s Rasiya Siddharth brings Apeksha to his house. On Holika Dahan Karishma and Mithai perform Rasiya. Karishma and Mithai perform beautifully but Siddharth looks in anger. Apeksha is left puzzled. She tells her mom that Mithai is trying to make her standards high by mixing up with Siddharth’s family. Mithai enjoys Holi to its best with the Choubey family. Apeksha gets angry but her mom calms her down. Abhishek challenges that Siddharth will not apply color to Mithai. Mithai is determined to make Siddharth eat the sweets.

Bade Achhe Lagte Hain episode spoiler – Priya hammers Krish Dixit Priya has a look at the CCTV camera and realizes that the unknown person knew that Ram will be present here. She feels that this man is very dangerous. Ram meets Krish Dixit and comes to know that he is a private investigator. He also reveals that Krish performs sting operations on rich and successful people and earns money out of it. Priya calls Ram but Krish threatens to kill him. Priya carefully makes her way towards the unknown man and ends up bashing Krish with her handbag.