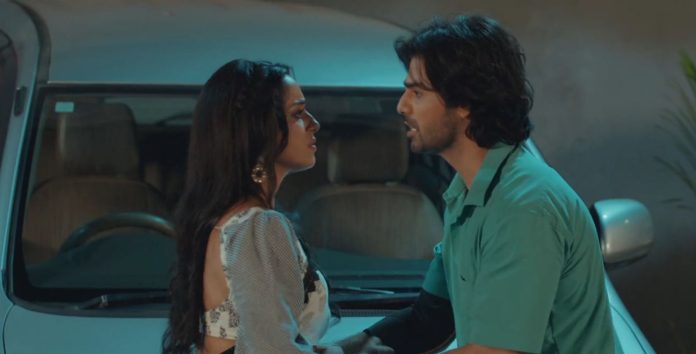 Yeh Hai Chahatein 13th April 2022 Written Update Yuvraj reveals truth Rudra and Prisha get shocked to know that Tarun got Prisha’s vulgar flyers printed from cyber cafe. Cyber Cafe owner says he saw Tarun only in his cyber cafe and doesn’t know who Dev is. Rudra says Dev must have bribed Tarun to do all this. Inspector tells Rudra that he is again and again accusing Dev, when it’s clearly shown in the CCTV footage that it wasn’t Dev but Tarun, who got Prisha’s vulgar flyers printed through the cyber cafe. Rudra says it’s Dev’s trick.

Prisha tells the inspector that Dev can use his friend Tarun to save himself. Inspector tells Rudra and Prisha that they can’t do anything against Dev till they get any proof against him. He asks Rudra to file a case against Tarun. Before Rudra can take a step further, Prisha says they don’t want to file any case against Tarun. This shocks Rudra. Prisha apologizes to the inspector for wasting his time and takes Rudra outside. At school, Saaransh keeps on beating Dev. Guard arrives with the principal and Dev starts a drama to gain sympathy.

Guard and Principal separates Saaransh and Dev. Dev pretends innocence and requests the principal to save him, else Saaransh will kill him. Principal scolds Saaransh for his harsh behavior with Dev. Aware of the truth, Aaliya feels bad for Saaransh. At the police station, Prisha explains to Rudra that Dev won’t let Tarun speak the truth and thus they need another way to get the truth out. At the same time, Prisha receives the principal’s call asking her to reach the city hospital with Rudra. At the hospital, Yuvraj enjoys his time and all the facilities given by the hospital to him. He decides to stay at the hospital peacefully for some more days and think about the proper way to reveal the truth to Rudra.

Nurse comes and asks Yuvraj about his present condition. Yuvraj replies he is good. Nurse shocks Yuvraj by showing him his bill. Yuvraj asks the nurse to stop joking as she herself told him that the person who brought him here already paid his hospital bill. Nurse tells Yuvraj that, that person only paid 5,000 rupees, rest he will have to pay. Shocked Yuvraj coughs seeing the 30,000 rupees bill. Yuvraj asks the nurse how he will pay the bill as he doesn’t have any money left with him. Nurse tells Yuvraj that he will have to pay his bill, otherwise the hospital will have to call the police on him. Nurse leaves when Yuvraj says he will arrange the money from somewhere.

Saaransh says he tried to control his anger but couldn’t tolerate it and thus beat Dev black and blue. Principal says he can’t accept this behavior, no matter what Dev told Saaransh. Revathi comes and asks the receptionist and principal, what happened to her son. Rudra and Prisha get shocked on knowing that Dev is Revathi’s son. Prisha wonders how evil Dev can be Revathi’s son. Principal tells Revathi that Saaransh beat Dev brutally. Revathi asks why, what Dev did. Revathi harshly asks Saaransh why he beat Dev. Prisha stops Revathi and reveals to her that Saaransh is her son. This shocks Revathi. Dev overhears and witnesses everything from inside his ward.

He smirks and says now Khuranas will learn, whom they messed up with as his mother won’t spare them. Dev decides to fool Revathi by making his condition a little worse. He uses the hospital knife to make a cut on his cheek, to increase Revathi’s anger. Revathi asks Prisha why Saaransh beat her Dev. Prisha shows her vulgar flyers that Dev got printed by Tarun. After seeing the flyers, Revathi defends Dev and says her son can’t even think of doing this. She asks Prisha why Dev will do this to her, when he doesn’t even know her. Prisha tells Revathi that Dev knows her as she is the one who got Dev rusticated from school. She reveals each and every crime that Dev did to trouble Khuranas, holi party, drugs case and chemical blast with Saaransh.

This shocks Revathi. Prisha says she doesn’t know why Dev is doing all this with her family and considering them his enemy. She tells Revathi that she tried a lot to make Dev understand but he isn’t stopping his evil tricks and actions. Revathi asks the principal if Prisha is saying the right thing. Principal tells Revathi that some kind of problem is going on in between Dev and Khuranas. He also tells Revathi that all proofs are against Tarun, but Prisha keeps on accusing Dev for everything. Revathi calls Prisha a bad mother and tells her that she didn’t know that she would turn out this bad.

Revathi keeps on defending Dev. She says Dev is a good son, who respects and loves his family. Revathi tells Prisha that she is falsely accusing Dev. She says even if God will come and say that Dev is evil, she won’t believe. Revathi says Dev can never commit a mistake. She asks Prisha even if Dev committed all the crimes, what right Saaransh has to beat Dev badly. Revathi threatens Prisha that she won’t spare her, if anything happens to Dev. At the same time, Dev screams can be heard from inside the ward and Revathi runs to him, warning Prisha. On the other hand, Yuvraj wonders how to get out of the hospital, without paying the bills. A ward boy comes and asks Yuvraj to change his clothes as it’s discharge time. He gives clothes to Yuvraj. Yuvraj acts dizzy and asks the ward boy to search for his medicine.

Using the opportunity, Yuvraj hits the ward boy’s head and makes him unconscious. He hides the ward boy and changes into his uniform. Yuvraj leaves the ward, wearing a mask to hide his face. Revathi runs to Dev and cries seeing his condition. Dev pretends innocent and continues lying that he can’t even think of doing all this to a woman, especially someone’s mother. Revathi says no one can dare to do all this to her son. She tells Dev that she will get Saaransh punished for sure. As Revathi leaves the ward, Dev smirks.

Revathi comes outside and keeps on scolding Saaransh for beating Dev brutally. She tells now she won’t consider Saaransh’s age or any relation. Revathi shocks everyone by saying that she will get Saaransh arrested. Both Prisha and Revathi defend their sons. Revathi doesn’t even try to understand anything and says Saaransh will go to juvenile prison for his crimes. Revathi complains to the inspector that Saaransh tried to kill her son Dev and asks them to arrest Saaransh. Prisha, Rudra and Saaransh get worried. In the next episode, Dev will witness police arresting Saaransh. Outside the hospital, Yuvraj will tell Prisha that she still loves him and thus she never told Rudra that he is Rajeev’s murderer. Rudra will get shocked and angry after overhearing this.

Reviewed Rating for Yeh Hai Chahatein 13th April 2022 Written Update Yuvraj reveals truth: 4/5 This rating is solely based on the opinion of the writer. You may post your own take on the show in the comment section below.