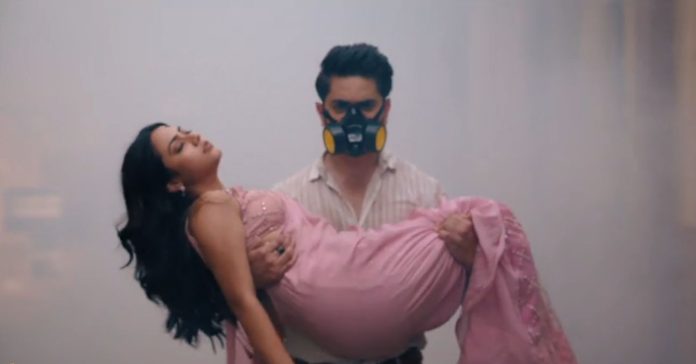 Fanaa 14th April 2022 Written Update Pakhi kidnapped Agastya cries and tells Pakhi that he can’t live without her. Sameer, Mohit and Neelima reach Pakhi with police. Sameer and Mohit hug Pakhi, while Neelima hugs Agastya. Pakhi apologizes to Sameer for letting Agastya trouble him. Sameer tells Pakhi that Neelima knew it all. Pakhi asks Neelima why she hid Aagstya’s reality and let him do wrong with everyone. Neelima apologizes to Pakhi and tries to explain to her that Agastya never wanted to hurt anyone. Pakhi says Agastya is a wrong and evil person.

Agastya feels angry. Virat tells Agastya that he already told him that he will get caught one day. He asks Agastya to peacefully surrender to the Police. Virat also tells Agastya that they have recorded his confession too. Agastya tells Virat that not him, god or law can separate him from Pakhi. He says even if Pakhi will wish to get separated from him, she won’t be able to. Agastya claps and says now. Suddenly, someone throws an instant smoke bomb in between everyone. Everyone starts coughing and visibility becomes low. Someone then passes a mask to Agastya. Agastya wears it and tries to take Pakhi away with him. Pakhi screams and asks Agastya to leave her. She tries to escape Agastya but can’t find anything properly visible.

Then Agastya taps on his driver’s shoulder. This driver turns out to be Yug. Yug apologizes to Agastya for reaching late. Agastya tells Yug that he reached at the right time. He says it’s good that they kept their 2nd plan ready as he knew Ishaan and Virat would have planned something big. Agastya thanks Yug and says that he will teach a lesson to Virat and Ishaan later on. Yug tells Agastya that he gave an injection to Pakhi, due to which she won’t gain consciousness till next 12 hours. At Agastya’s confession place, Ishaan gains consciousness and gets worried seeing Pakhi and Agastya missing. He wakes up everyone else. Ishaan tells everyone that Agastya took away Pakhi with him. Everyone gets more worried seeing that Agastya disappeared with Pakhi. Ishaan says they can still trace Agastya through the tracker attached in his watch.

Just then Ishaan sees that Agastya’s watch is kept broken on the floor. He feels angry. They see that the place they are standing at can blast at any time. Everyone runs away from there. On the other hand, Agastya tells Pakhi that he will give her so much love that she will forget everything and will start loving him again. He says they will go so far away that no one will be able to find them ever. Yug tells Agastya that till now Ishaan, Virat, Sameer, Mohit and police would have gained consciousness. Yug further tells Agastya that soon Virat will get police posted every way out of Delhi and block them. Agastya gets into thinking.On the other hand, Virat tells his junior that Agastya will surely try to run out of Delhi with Pakhi. He asks his junior to block all the ways out of Delhi. Virat explains to his junior to share Agastya and Pakhi’s picture everywhere as they have to catch Agastya anyhow. Ishaan says that it’s surely Yug’s (Agastya’s right hand) work and they made a mistake by not thinking about him. Virat says they will trace Agastya anyhow, no tension required. Yug, on the other hand, stops the car and tells Agastya that going further is dangerous. Agastya asks Yug if he made the proper arrangements at the place where he is going to take Pakhi. Yug replies yes and asks Agastya how he will take Pakhi away with such tight security.

Agastya hears people praying nearby and smirks. At Raichand house, Shanaya asks Sameer if Agastya really did whatever Mohit said. She also asks Sameer if Agastya really held him captive in the basement of his house. Mohit angrily tells everyone that whatever they heard about Agastya is true. Naveli says Agastya can’t do all this and someone is trapping him to fulfill his/her motives. Shanaya asks Naveli if Agastya is not wrong, then where is Pakhi. She says that police aren’t mad that they will reach to arrest Agastya, for no reason. Shanaya asks Naveli if she wants to say that her father is lying. She tells Naveli that even Neelima told the truth.

Shanaya asks Naveli if she will still take her brother’s side. Naveli says she knows that Agastya can’t do anything wrong as he loves Pakhi and cares for her. Shanaya asks Sameer, how Agastya kidnapped Pakhi in police’s presence. She expresses worry for Pakhi. Sameer tells Neelima that Agastya crossed all his limits now. He threatens to get Raichands arrested, if anything happens to Pakhi because of Agastya. After this, Sameer leaves with Shanaya and Mohit. Police are seen checking vehicles at Delhi’s all check posts /points. ACP Ranjit Singh arrives and introduces himself to Ishaan at a check post.

Ranjit asks Ishaan to return home as he is severely injured. Ishaan tells Ranjit that he won’t return home, till Agastya gets caught. He explains to Ranjit that if Agastya crosses the Haryana border, escaping from them, he (Ranjit) will lose this case and finding Agastya will become more difficult for them. Ranjit says that Agastya can’t escape from such tight security. Ishaan tells Ranjit that Agastya can cross any limit and most importantly he can even hurt Pakhi, who is with him at present. At the same moment, a truck with Punjabi dancers arrives. Ranjit checks it but both Ishaan and Rajiy fail to recognize Agastya, hidden in the dancers’ get up. Agastya smirks, dances and leaves.

Ranjit finds him suspicious but lets him go. Later, Ranjit interrogates Yug at the same check post, unaware that he is Agastya’s right hand. Yug sees Ishaan behind him and gets a little worried. He leaves quickly with Ranjit’s permission, before Ishaan sees him. After crossing the border, Agastya takes leave from the dancers group and also takes off his get up. Later, Yug and Agastya reach a deserted place where there is a haveli/bungalow. They take out Pakhi from the drum/dhol. Agastya apologizes to unconscious Pakhi for bringing her in a drum like this, as he had no other option.

He tells Pakhi that now no one would be able to separate them. At Srivastava’s house, Shanaya tells Sameer that Prema called twice and asked about Agastya’s health. She asks Sameer, till when will they have to hide Agastya’s reality from Prema. Ishaan comes there and tells Sameer and Shanaya that he and police did everything but didn’t find Pakhi and Agastya. Sameer prays to God to help them and save Pakhi. He asks God to give them some hint or some signal, how and where they can find Pakhi. Suddenly, electricity goes off. Sameer wonders what signal God is giving him.

On the other hand, Pakhi wakes up in a dark room. She tries walking but falls. Pakhi gets shocked and tense seeing herself tied in a chain. She screams and asks Agastya to let her go as he can’t keep her with him forcefully. She tells Agastya that everyone is now aware of his reality and he will soon get caught. Pakhi asks Agastya to not commit another crime by holding her captive. She keeps tapping on the door, asking Agastya to open it and let her go as her family would be tensed for her. She stops crying and gets scared as a woman enters the room she is held captive in.

She asks the woman to help her leave as Agastya has kidnapped her. The woman tells Pakhi that crying won’t work in front of Agastya. Pakhi asks the woman, where she is held captive, which place is it. The woman asks Pakhi what problem she has in living here. Pakhi pushes the woman. The traditional lantern in the woman’s hand breaks into pieces and she gets angry at Pakhi. She tells Pakhi that she won’t be able to escape this place and scolds her for being demanding. Pakhi thinks about what she should do. She snatches water from the woman’s hand and drinks it. After drinking water, Pakhi falls unconscious once again. She understands that water was spiked.

Agastya comes there and smirks. In the next episode, Agastya will try to feed Pakhi’s favorite “choley bhature” to her. Angry, Pakhi will throw the plate on the floor. Agastya will get angry and push Pakhi on the bed. Pakhi will get shocked and scared. On the other hand, Ishaan will tell Sameer that he saw Yug outside the police station yesterday and clicked his photograph secretly. He will further tell Sameer that Pakhi and Agastya will be found, once Yug gets caught.

Reviewed Rating for Fanaa 14th April 2022 Written Update Pakhi kidnapped: 3/5 This rating is solely based on the opinion of the writer. You may post your own take on the show in the comment section below.