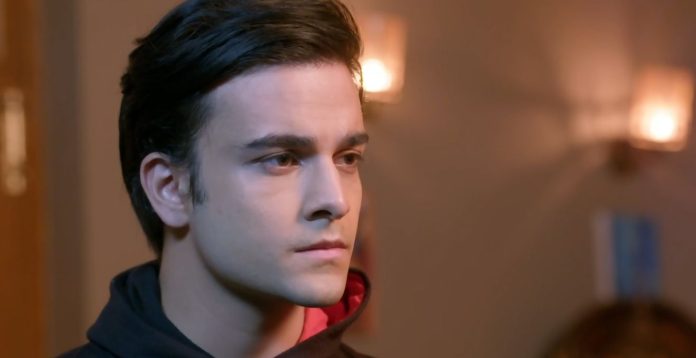 Kumkum Bhagya 15th April 2022 Written Update Ranbir tricked Ranbir and Prachi have a sweet emotional talk. He asks her to hold his hand and come along, he will take her to such a place where she will feel good and peaceful. She holds his hand. Ranbir and Prachi go away from the living room, to spend some quality time and find peace. Rhea tells Aaliya that for the first time, she is glad that Ranbir and Prachi are together, so Ranbir isn’t here to keep an eye on Nick. Aaliya and Rhea take an unconscious Nick with them to get rid of the evidences against them. Rhea has misled Ranbir by her drama really well. She doesn’t think he will dare to suspect her again, after she rendered an amazing speech. Will Ranbir miss out Nick and fail to get the information from him? Will Ranbir ever learn about Rhea’s evil truth? Keep reading.

Earlier in the show, Rhea asks Ranbir to understand that she can never harm her sister. She ends Ranbir’s suspicion by lying that she was just tying the ropes tightly, she is also worried for Prachi. Aaliya applauds her. Ranbir tells that he can’t apologize, because he reacted on what he had seen. He asks Prachi to go and sleep. Pallavi asks him to focus on Nick. She asks Aaliya to be grateful to Ranbir, that he stopped the police from coming, else she would have got arrested for attacking Nick. Ranbir asks why is Vikram sleeping. Pallavi tells that he is taking sleeping pills. Rhea and Aaliya get worried.

Pallavi tells Ranbir that Vikram was in much tension so he took the sleeping pills. Rhea thinks Vikram already took the pills and she has given him some pills, he can get an overdose and fall sick. She worries for Vikram. Ranbir checks on Nick. Prachi finds Shahana and Dida sleeping. She thinks of Ranbir. She starts feeling the same for him like before. Ranbir meets her. She asks him to stay outside. He asks her how did she know that its him. She tells that she always senses him. He tells that there is still acquaintance between them. He asks her can she give him some moments of peace, when there is a storm in his life. He wants to find some peace so that his mind gets calm. Prachi also wants to get at peace.

He asks her not to tell him that she is doing a favor on him. He wants to hear some words of love from him. Prachi tells that she isn’t able to relax. He asks her to hold his hand, he will take her to a place where she will find peace. Prachi trusts him and holds his hand. They have a moment. They leave from Dida’s room. Rhea and Aaliya stay worried because of Nick. Aaliya tells that anyone can see Rhea. Rhea goes mad in anger. She tells that they have made a huge mistake and would get punished now. Aaliya explains her that she is going in a loop, she fainted Nick just to stop him from revealing his name.

She is also scared. She apologizes to Rhea. She tells that she won’t scold Rhea and will always support her, they are safe until Nick is unconscious. Rhea feels okay hearing the positive things. She gets an idea. She tells that they will leave an impression on Nick that they are going to save him, then he won’t take their name. Aaliya tells that they are in a mess. Rhea tells that Pallavi will go to sleep on her saying, she trusts her, once everyone goes away, then they can take Nick away. She is glad that Ranbir and Prachi are together this time. She wants to do the needful.

Ranbir takes Prachi to the terrace. She closes eyes. Ranbir recalls their sweet moments of the past. He tells her that the place was in his hands, but not the wind, the wind is blowing for her. She asks him why is he smiling. He replies that he got to remember something. He tells that Prachi used to stay happy for little things. He reminds her the moment when she was happy enjoying the rains, then he got to know that she loves to see the moon. He tells that little things make her so joyful, humans run for big happiness and neglect the little moments of joy, they should find happiness in little things, else desires are something that increases every moment. He tells that he is really happy to see her safe and peaceful.

They have a moment when they spend time and get a smile on their faces. She asks him to feel the moment by closing his eyes and live it. He agrees to her. He closes eyes. Prachi falls for him once again. Pallavi feels sleepy. Rhea and Aaliya ask her to go and sleep. They tell that they will call her when Nick gets conscious. Pallavi is really tired. She goes to take rest. She tells that she will Vikram sleep in the hall. She goes to her room. Aaliya tells that they can take Nick now. Rhea tells that Ranbir can come anytime. Aaliya tells that they can do something when everyone goes to sleep. Rhea tells that they have to take special care of Ranbir, if Nick gets conscious in front of Ranbir, then Ranbir will bash him and get the truth out of Nick.

Rhea and Aaliya free Nick from the ropes. They take Nick. Ranbir relaxes on Prachi’s shoulder. Prachi recalls their sweet past moments when they were too happy together. She sheds tears. Ranbir takes a nap. Later, he wakes up and thanks her for giving him a short sleep of peace. She tells that she told him to feel the moment. He asks her why is she crying. She denies to be crying. He asks her not to lie. Prachi tells that she was just thinking their past and got emotional. She adds that she remembered their old days. He asks her to say what did she think. Aaliya and Rhea take Nick outside the house. Prachi drops a vase down by mistake. Prachi and Ranbir look down and don’t see Rhea and Aaliya taking Nick.

Prachi sees the shoe fallen there and tells that its Nick’s shoe. Ranbir tells that Nick is running away. They run to see Nick. Pallavi is hiding there and keeping a watch on Ranbir and Prachi. Aaliya and Rhea take back Nick and tie him up. They also tie up themselves. Ranbir tells that Nick is still here. Rhea and Aaliya fake a drama to show that they aren’t involved. They try to trick Ranbir. Ranbir can’t believe his eyes.

Reviewed Rating for Kumkum Bhagya 15th April 2022 Written Update Ranbir tricked: 4/5 This rating is solely based on the opinion of the writer. You may post your own take on the show in the comment section below.