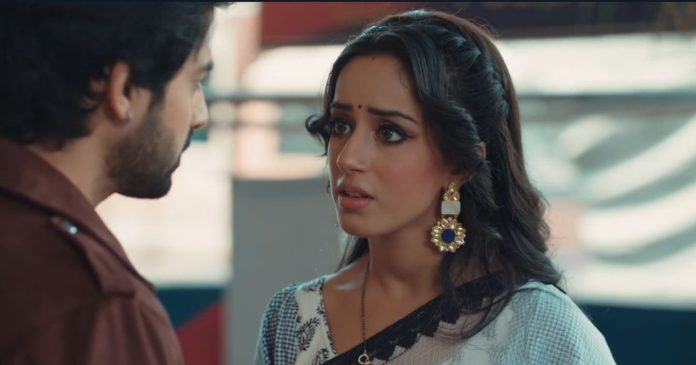 Yeh Hai Chahatein 14th April 2022 Written Update Upcoming Revathi asks the inspector to arrest Saaransh as he beat her son Dev brutally and tried to kill him. Inspector says yes mam. Saaransh says he doesn’t want to go to prison and tells Prisha that he beat Dev, because he was talking vulgarly about her. Rudra tells Saaransh that he will make everything alright. He walks to the inspector and tells him that Saaransh is a good boy, is the school’s trustee and has always helped everyone. Rudra asks the inspector to ask anyone that they haven’t received any complaints about Saaransh till now. He says Saaransh never did anything wrong.

Revathi asks Rudra if Saaransh is a good boy then why he beat her son Dev brutally. She says Saaransh will kill someone’s child. Revathi tells Rudra that Saaransh isn’t fit to roam around freely and has to go to prison. Prisha requests Revathi to try and understand and not get Saaransh arrested. Revathi asks Prisha if she would have spared the child, who beat her son. Rudra requests Revathi to punish, not his son as he is very young. Dev smirks inside the ward thinking that now all of them are his puppets. He thinks that now he will decide what will happen in Khuranas life. Dev thinks he can make Khuranas dance on his tunes.

He pretends to breathe heavily and sends the nurse to call Revathi inside. Rudra asks Revathi to trust him, he can understand her plight. He apologizes to Revathi and tells her that he and Prisha are ready to do anything she says. Revathi asks Rudra and Prisha to heal her son Dev’s wounds fully. She tells Rudra and Prisha that if they can’t cure Dev’s pain, then Saaransh’s punishment also won’t stop. Revathi asks the inspector to arrest Saaransh. In her thoughts, she thinks that Saaransh can’t go to prison but it’s necessary to instill fear in him, so that Saaransh realizes his mistake. Aaliya, Rudra and Prisha get worried for Saaransh.

Dev smirks seeing all this. Nurse comes and tells Revathi that Dev’s health is worsening and he is calling all of them inside. Everyone runs to Dev. Dev pretends to be in severe pain. Revathi gets worried for Dev and tries to calm him. Dev asks Revathi to not send Saaransh to prison. This shocks everyone. Revathi tells Dev that he can’t spare Saaransh who beat him so brutally. Dev keeps on pretending to be innocent and tells Revathi that this is the difference between him and Saaransh. He says Saaransh can get him rusticated from school, without his fault but he can do the similar thing to Saaransh. Dev tells Revathi that he doesn’t want Saaransh to face the insults that he faced.

He reminds Revathi that she herself said that the forgiver is the biggest of all. Dev says Saaransh’s whole life and career would get ruined, if he goes to prison. He tells Revathi that he doesn’t want to be like Saaransh. Dev says he is ready to forgive Saaransh’s mistake and requests Revathi to not send Saaransh to prison, if she loves him. Revathi tells Dev that she loves him more than her life. She says she won’t be able to forgive Saaransh forever but will also not send him to prison for Dev. Revathi asks Prisha to see her values instilled in Dev and be grateful to him forever. She apologizes to the inspector and asks him to go as Dev doesn’t want to file a complaint against Saaransh.

Prisha says sorry and thanks Revathi for forgiving Saaransh. Revathi shows anger to Prisha and says she is proud of her good son Dev. Prisha, Rudra and Saaransh leave Dev’s ward. A patient sees Yuvraj in the ward boy’s uniform and asks him to bring him the wheelchair as he has to go to the doctor’s cabin. Yuvraj refuses to do so and leaves insulting the patient. He witnesses Saaransh with Rudra and Prisha in the same hospital. Saaransh apologizes to Prisha and says he got very scared today. Prisha tells Saaransh to not worry as someone older would have also got scared in this situation. Rudra asks Saaransh to not worry as he and Prisha are with him.

Yuvraj wonders what Rudra, Prisha and Saaransh are doing in the hospital. He thinks to get details about their situation and use it to his advantage. The wheelchair patient irritates Yuvraj. Yuvraj makes the patient sit on a wheelchair and starts taking him ahead. He tries to follow Rudra and Prisha to know about their tension. Prisha tells Rudra that she never thought Dev could make such evil strategies too. Rudra says he was already saying that Dev planned everything in advance by thinking a lot. Prisha says Dev is taking advantage of his mother’s emotions and love.

They discuss that Revathi loves Dev so much that she thinks her son is best. They say that Revathi doesn’t know about her son’s reality. Prisha says Dev saved Saaransh to increase Revathi’s trust in him and to look good. Rudra says this means Dev intentionally provoked Saaransh to beat him so that Saaransh becomes bad in everyone’s eyes and Dev himself becomes a good guy in the world’s eyes. Rudra and Prisha discuss that Dev turned out to be a crook. Saaransh says he thought Aaliya would support him but she remained silent even after knowing everything. Prisha, Saaransh and Rudra wonder why Aaliya remained silent. To know the truth, they leave to talk to Aaliya.

Yuvraj decides to proceed with his plan and modifies it. He decides to talk to Prisha before talking to Rudra. Prisha, Rudra and Saaransh meet Aaliya. Aaliya apologizes to them for not being able to support or help them. She reveals that Revathi is a serious heart patient and a few years ago stents were put in her heart. Aaliya also reveals that the doctor asked her family clearly to not give any tension or shock to Revathi. This information shocks Rudra, Prisha and Saaransh. Rudra asks Aaliya if Dev doesn’t know about Revathi’s condition. Aaliya says Dev knows everything and always takes advantage of it.

She says that Dev keeps lying to Revathi and misleads her. Aaliya says that Revathi is unaware of Dev’s reality and considers him an ideal son. She reveals that last time when Revathi got ill, Dev pretended to care for Revathi and thus she always blames herself for Dev’s failure in school. Rudra asks what about when Dev failed in school for the 2nd time. Aaliya says Dev pretended to be ill himself and lied to Revathi that he didn’t go to give the exam and thus failed. She tells Khuranas that Dev has two personalities/faces, one which he shows to their parents and second, which he shows to the whole world.

Aaliya says she tried to reveal Dec’s reality to Revathi many times but Dev always stopped her reminding her about Revathi’s condition. Aaliya cries and says she doesn’t want to lose her mother. Prisha hugs Aaliya and asks her to reach Khuranas, if she faces any problem. Rudra angrily says what type of son is Dev, who is taking advantage of his own mother’s health condition. Prisha stops Rudra and tells Aaliya to be fine. Saaransh asks Rudra and Prisha to go home and he will return after dropping Aaliya to her house. Rudra and Prisha leave, asking Aaliya to take care. Yuvraj overhears the whole conversation.

To separate Rudra and Prisha for some time, he shouts Rudra’s name. All fans of Rudra run to him for a selfie and autograph. Prisha leaves, telling Rudra that she is waiting outside. Thunderstorms start. Prisha gets shocked and angry seeing Yuvraj outside her car. She asks Yuvraj what he is doing here and tells him that police are searching him everywhere. Rudra tells Prisha that he loves her and has nobody else but her. Prisha pushes Yuvraj away and calls him a murderer. She tells Yuvraj that words like love don’t suit him as he was about to burn her alive. Prisha asks Yuvraj if this is called love.

Prisha tells Yuvraj that it has been ages since that happened and things were different then. Yuvraj says till now nothing has changed. He says the truth is that she hid that he killed Rajeev, not her. Yuvraj tells Prisha that till today, she didn’t tell anyone the truth about Rajeev’s murder. He also tells Prisha that she still loves him as he is roaming free of punishment, only because of her. Rudra hears the last few things from Prisha and Yuvraj’s conversation. Weather grows worse with thunderstorms and rain. Rudra asks if Yuvraj killed Rajeev. Flashback shows that Yuvraj witnesses Rudra coming outside and he decides to use his trump card now. Flashback ends. Prisha gets shocked and Yuvraj smirks thinking that Rudra won’t forgive Prisha for hiding such a big truth.

Rudra gets angry and attacks Yuvraj. He starts beating Yuvraj brutally. Prisha try to stop Rudra but couldn’t. Yuvraj also beats Rudra badly. He runs away using the opportunity and Prisha tries to calm Rudra. Rudra pushes Prisha away and screams out his anger at her, for hiding the big truth about Rajeev’s murder. Prisha requests Rudra to hear out once. Rudra refuses to hear anything from Prisha and calls her a deceiver. He asks Prisha how she is living peacefully by hiding such a big truth. He says it would have been good, if she (Prisha) wouldn’t have been found by him. Rudra tells Prisha that he wishes she would have died instead.

In the next episode, Rudra will tell Prisha that she is dead for him now. Later, a scared Saaransh will tell Prisha that Dev called and told him that he will refile the case against him and will send him to juvenile prison. Prisha will hug Saaransh and decide to expose Dev’s reality to Revathi, anyhow. Later, Prisha will meet Revathi to talk about Dev. Rudra will be seen warning Dev to not eye his son Saaransh. Dev will scream for his mother’s help. Revathi and Prisha, will run towards Dev’s ward and get shocked.

Reviewed Rating for Yeh Hai Chahatein 14th April 2022 Written Update Upcoming: 4/5 This rating is solely based on the opinion of the writer. You may post your own take on the show in the comment section below.