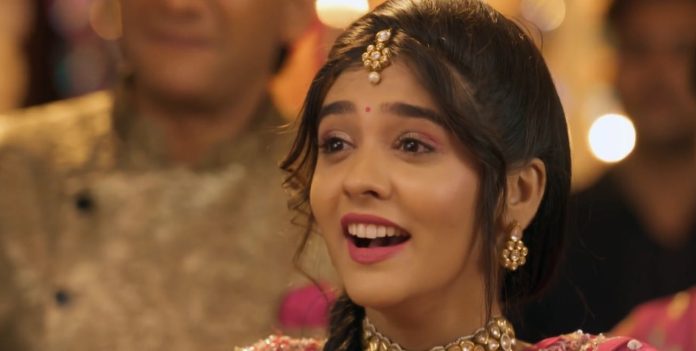 Yeh Rishta 14th April 2022 Written Update Grand surprise Harsh on call assures someone that Kumar Sanu is a very punctual person and will reach the city hall on time. He asks the person on call to ensure that the minister sir should reach the function on time. Harsh tells the person that this function is very important for the Birla family, expansion of their business and hospital. He says he won’t be able to attend the minister’s function as he has to attend an important family function. Harsh thanks the person and disconnects the call.

Abhimanyu asks Manjiri if she will prick him if he loses his integrity in Akshara’s love. He asks Manjiri if she has any idea what Akshara is going to wear. Manjiri replies no. At Goenka house, everyone gets stunned seeing Akshara beautifully decked up for her sangeet. They intentionally and teasingly scare Akshara by telling her that she chose wrong lehenga and make up. But soon everyone tells Akshara that they were joking and she is looking amazing. Suhasini and Swarna ward off bad/evil sight from Akshara. Aarohi wonders how and why Akshara always looks so pretty. Akshara sees herself in the mirror and gets shy.

In her thoughts, Akshara tells Abhimanyu that she got ready for him as he likes it. She says she also likes it when Abhimanyu sees her with love. At Birla house, Abhimanyu tells Manjiri that he likes Akshara in simple as well as fancy clothes. He asks Manjiri what he will do after marriage, as compliments have ended in his brain. Abhimanyu also asks Manjiri if there are any coaching classes for would-be husbands. Manjiri tells Abhimanyu that she wouldn’t have sent him there if such would have existed. She explains to Abhimanyu that the words that should come out from the heart, why training is necessary for them.

Manjiri further explains to Abhimanyu that compliments are given from the heart, not many words are used. She tells Abhimanyu that Akshara will not get as much impressed by his 10 compliment lines as she will get by his 10 minutes stare of love. Manjiri explains to Abhimanyu that wives find their happiness in their husband’s eyes only. Abhimanyu tells Manjiri that his eyes are saying that his mother is very beautiful. Manjiri gets happy. Goenkas asks Akshara what song she is going to sing for Abhimanyu today. Akshara tells everyone that it’s a surprise. Kairav says yesterday Abhimanyu gave a surprise to Akshara, today she will surprise Abhimanyu.

Akshara recalls yesterday’s events and unknowing forgiveness from Abhimanyu. She says she hopes that Abhimanyu will like her surprise. Suhasini tells Akshara that Abhimanyu will surely like her surprise. Goenkas says today they will defeat Birlas. At Birlas, Abhimanyu receives a call and tells Manjiri that Dr. Rihan called him for an emergency. Abhimanyu and Akshara’s vehicles pass each other. Akshara and Goenkas reach the Birla house. Birlas welcome Goenkas grandly. Harsh’s little performance during the welcome surprises Goenkas. Manish and Harsh give each other a competitive look. They also talk competitively.

Manjiri praises Akshara’s look and says Abhimanyu asks the right question from where he will bring new compliments for Akshara daily. Akshara gets shy. Using red chillies, Manjiri wards off the evil/bad sight from Akshara. She also applies kala teeka to Akshara. Akshara asks Manjiri if she is fully fine now. Manjiri says she is absolutely fine. Anand in a taunting way asks Akshara to improve Manjiri’s condition using her music. He tells Akshara that she will need a patient for her new department. Goenkas feels bad but remains silent. Mahima asks Aarohi if she won’t ask about Manjiri’s health as she met with a major accident.

She says people these days are so bad that they leave other people behind to die. Akshara and Aarohi feel guilty and confused respectively. Goenkas also feels confused. Mahima says once they get hands on Manjiri’s culprit, they will make him/her rot in prison by making a strong case against him/her. Akshara and Aarohi grow more confused and shocked. Aarohi asks Manjiri if she is fine now. Manjiri replies yes. Mahima says it’s good that many of them are doctors, otherwise the person who hit Manjiri didn’t leave any stone behind to let Manjiri die. She says Manjiri hasn’t fully healed, internally.

Aarohi and Akshara get more guilty. Manish hears Harsh telling someone that Kumar Sanu sir has reached the hotel properly, is waiting in his room and will reach the city hall on time. He also hears that Harsh isn’t attending an important function for attending Abhimanyu and Akshara’s sangeet. Harsh tells Manish that now Birlas name is enough. He explains to Manish that the minister sir provides them funds for giving the best treatment to their patients. Neil notices Akshara searching for Abhimanyu. He tells her that she won’t find Abhimanyu even after using a telescope. Akshara says he isn’t searching for anyone. Neil tells Akshara that he will do Abhimanyu’s work, till he arrives.

He tells Akshara that she is looking very pretty today. Akshara thanks and asks Neil where Abhimanyu is himself. Neil tells Akshara that Abhimanyu ran away like a storm after receiving a call. Akshata grows serious and tense. Neil notices this and leaves to get juice for Akshara. Akshara wonders if Abhimanyu went to complain about Manjiri’s accident. She tries to call Abhimanyu but doesn’t get to talk to him. On the other hand, Manish irritates Harsh while he seems busy on call. Harsh feels angry but ignores Manish. He says he won’t spare Goenkas if something wrong happens in the family function as he is already not attending the important minister’s function.

Akshara texts Abhimanyu asking him where he is, as she is waiting for him. Harsh through a call gets to know that Kumar Sanu can’t be found anywhere. Harsh asks the person on call to find Kumar Sanu anyhow. Anand tells Harsh that he would have surely attended the minister’s function for meeting Kumar Sanu, if Abhimanyu’s sangeet ceremony dates wouldn’t have clashed with it. He says he is a big fan of Kumar Sanu. Harsh laughs and tells Anand that he recalled his childhood girlfriend pallavi. Anand asks Harsh to talk in a low voice, otherwise Mahima will get angry. He says Mahima doesn’t like Pallavi.

Anand tells Harsh that Pallavi was his first love and he will remember her even at the age of 55. Harsh says he can’t forget Pallavi as he was the one who used to make Anand’s love letter reach Pallavi. He reminds Harsh that Pallavi was also a big fan of Kumar Sanu. Harsh also tells Anand that he will surely get to meet Pallavi, if he will attend the minister’s function, where Kumar Sanu is invited as an important guest. Manish and Akhilesh smirks overhearing Harsh and Anand’s conversation. They tease and scare Anand and Harsh with Pallavi’s name. Harsh and Anand decide to show their attitude to the Goenkas on the wedding day as the groom’s family.

Akshara keeps worrying and wonders why Abhimanyu is taking time. At the same time, Abhimanyu screams Akshara’s name. He irritates everyone with his singing. Everyone gets shocked hearing a melodious voice suddenly. Abhimanyu enters the sangeet ceremony on bike with Kumar Sanu. Everyone gets surprised and amazed seeing Kumar Sanu, while Harsh gets shocked and confused.

Reviewed Rating for Yeh Rishta 14th April 2022 Written Update Grand surprise: 4/5 This rating is solely based on the opinion of the writer. You may post your own take on the show in the comment section below.