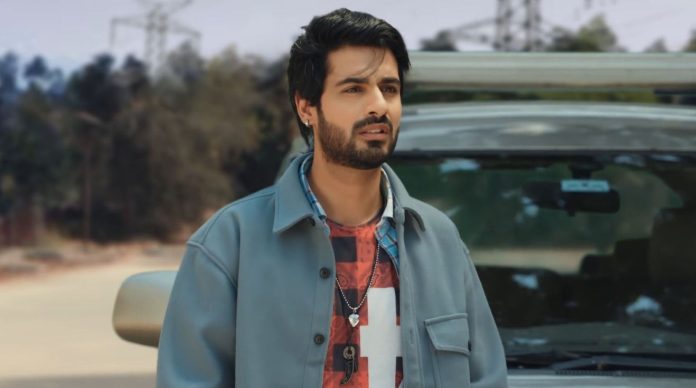 He angrily screams at Prisha for making him believe that his brother’s murderer Yuvraj is his daughter Ruhi’s father. Rudra asks Prisha why she lied to and betrayed him. He tells Prisha that even enemies don’t deceive each other like how badly she deceived him. Rudra also tells Prisha that it would have been better if she would have killed him, instead of betraying him. Prisha reminds Yuvraj that in the past she used to feel love for Yuvraj and he made her believe that Rajiv had an accident. She says she had no idea that Yuvraj killed Rajiv. Prisha further tells Rudra that she got to know about Rajiv’s murder by Yuvraj a lot later.

He warns Prisha to not dare follow him. Prisha keeps on screaming and trying to stop Rudra, but fails. Rudra starts going away and Prisha breaks down. “Mann Bharrya” starts playing in the background. Rudra recalls his moments with Rajiv. He also recalls Yuvraj telling Prisha that she hid his truth of being Rajiv’s murderer as she used to love him and didn’t wanted him to get imprisoned. Rudra also recalls seeing Rajiv’s dead body. He sits aside the road, cries and screams, “Bhai”. Rudra promises Rajiv that he will take revenge from Yuvraj and won’t spare him. He also resolutes that he won’t ever forgive Prisha, who saved Yuvraj.

Prisha wonders how to tell Saaransh that Rudra got to know the biggest truth that Yuvraj killed Rajiv (Saaransh’s real father and Rudra’s brother). She hopes that Rudra would have reached home fine. Prisha thinks, no matter what, she needs to pacify Rudra and explain to him that she didn’t do anything intentionally. Prisha and Saaransh return home. Sharda asks Prisha where Rudra is. Prisha lies to Sharda that Rudra went to the studio for some important work. Prisha tries calling Rudra from Saaransh’s phone. Seeing Prisha worried, Sharda asks Prisha to honestly tell her what happened.

Prisha wonders how to tell Sharda that Rudra has started hating her for hiding Rajiv’s murder truth. She thinks even Sharda might hate her for hiding the big truth about Rajiv’s murder. Sharda asks Prisha to tell her as she is getting very tense. She asks if Dev again did something. Saaransh and Prisha say nothing happened. Prisha tells Sharda that she just got worried thinking why Rudra didn’t return home till now. She goes to freshen up. Late at night, Sharda asks Prisha if something happened between her and Rudra. Prisha lies and tells Sharda that she is just worried thinking why Rudra didn’t return till now as it has got late.

Sharda tells Prisha that after whatever is happening for a few days, she is feeling worried. She asks Prisha if they should contact the police. Prisha thinks Sharda is saying the right thing. She feels worried thinking if Yuvraj did anything as he can do anything. Before Prisha and Sharda could leave for the police station, Rudra comes and says it’s not required. Prisha runs to Rudra but he ignores her and asks Sharda to not worry. He explains to Sharda that he got busy and didn’t realize about the home calls and time. Sharda tells Rudra that he should have at least thought about Prisha, who was so worried about him.

She reminds Rudra that he and Prisha remained away from each other for 5 years. Sharda tells Rudra that she doesn’t want any more issues to arise between him and Prisha. She asks Rudra to freshen up till she serves food for him and Prisha. Rudra tells Sharda that he knew that he would get late at the studio and thus had dinner there only. He says he is tired and going to rest upstairs and leaves. Prisha leaves asking Sharda to rest as she also doesn’t want to have dinner. Sharda says Rudra never eats dinner without Prisha and even Prisha left without having dinner. She wonders why Rudra lied to her. Sharda thinks something wrong is going on between both Prisha and Rudra.

Later, Prisha tries talking to Rudra. She requests Rudra to hear out her reason behind hiding such a big truth first. Rudra refuses to hear anything and screams at Prisha. He asks Prisha to not dare touch him as he feels disgusted by her touch. Rudra also asks Prisha to shut down and stay away from him. Rudra tells Prisha that he won’t accept her justification. He also tells Prisha that she crossed all lines of betrayal by hiding Rajiv’s truth. Rudra tells that they fought and tackled all misunderstandings between them because they truly loved and blindly trusted each other. He also tells Prisha that she broke his and their relationship’s trust.

Rudra further tells Prisha that she was playing with his love and trust. Prisha reminds Rudra that their marriage happened in very awkward circumstances and they used to hate each other. Rudra tells Prisha that he remembers everything that earlier she used to love Yuvraj. He reminds Prisha of the bond they shared with each other because of Saaransh. Rudra also reminds Prisha of the promise they made to each other, that they won’t hide anything from each other, betray each other and part ways. He asks Prisha why she broke that promise. Rudra says bow he thinks Yuvraj was right that she (Prisha) still feels for him (Yuvraj) and was thus saving him from the noose.

Prisha says this isn’t the truth. Rudra grabs Prisha arms tightly and asks her what is the truth then. Prisha tells Rudra that he is hurting her. Rudra asks Prisha what about the wounds and pain she gave him. He tells Prisha that she killed his trust and shattered his world of love which he made for her. Rudra tells Prisha that she considered her the foundation of his family but she turned out to be a liar and deceiver. Prisha explains to Rudra that earlier she used to love Yuvraj and seeing his care for her parents, she didn’t want to snatch her parents support, which was him. She says Yuvraj even made her believe that Rajiv died in an accident. Prisha says because of all this she accepted to be hanged on noose.

She tells Rudra that she very late got to know that Yuvraj murdered Rajiv. Prisha explains to Rudra that she many times tried to tell him the truth but never got the right opportunity. She requests Rudra to trust her, she is telling the truth. Prisha tells Rudra that after all this they got married and she wanted to forget all her past problems and pain. She says she just wanted to get over the trauma. Prisha asks Rudra to trust her that slowly she herself forgot this truth. She further explains to Rudra that after all this they fell for each other and started their family. Prisha tells Rudra that they also faced so many challenges. She says that she got busy with her family in care of him and Saaransh.

Rudra tells Prisha that they will be separate inside their room. He tells Prisha that she will only get punishment and hate in this room. Rudra takes the pillow, blanket and lies on the couch. Prisha breaks down and cries profusely. Rudra turns his face in the opposite direction and decides that now Prisha’s tears won’t wipe off his anger for her. In his thoughts, Rudra says Prisha broke his heart and killed his feelings. He says he can never forget Prisha now and hates her. While Rudra falls asleep on the couch, Prisha falls asleep near the puffies.

Next morning, Prisha wakes up and tries covering Rudra with the blanket. Rudra suddenly wakes up and angrily asks Prisha to not come near him. He receives the inspector’s call and tells him that he wants Yuvraj at any cost. Later at the breakfast table, Rudra burns his own hand in the process of refusing Sambhar from Prisha’s hand. Prisha gets worried for Rudra and cares for him. Sharda says Rudra must be feeling pain because of the burn. Rudra says the wounds on soul and heart are more painful than physical ones. He says these wounds never heals. Rudra leaves with Ruhi and Saaransh for school leaving Prisha behind.

Sharda asks Prisha what is happening between her and Rudra as she is feeling something wrong is going on. Prisha asks Sharda to not feel worried. She lies to Sharda that Rudra wants to be punctual as now he became a teacher. Sharda leaves. Prisha decides to be normal and not let Sharda and kids know that a big tension is going on between her and Rudra as Rudra wants the same.

In the next episode, Saaransh will cry and tell Prisha that he doesn’t want to go to prison. Prisha will ask Saaransh why he is saying all this. Saaransh will tell Prisha that Dev called and threatened him that he will refile the case against him. Prisha will hug Saaransh and decide to bring Dev’s reality in front of Revathi at any cost. She will meet Tarun and get video proof from him against Dec. After this, she will meet Revathi at the hospital to talk to her about Dev. Before she could proceed to talk to Revathi they will run inside Dec’s ward hearing his screams. In Dev’s ward, Rudra will be seen grabbing Dev’s collar and threatening him to not dare eye his son, Saaransh. Prisha and Revathi will seem shocked.

Reviewed Rating for Yeh Hai Chahatein 15th April 2022 Written Update Rudra’s fury: 4/5 This rating is solely based on the opinion of the writer. You may post your own take on the show in the comment section below.