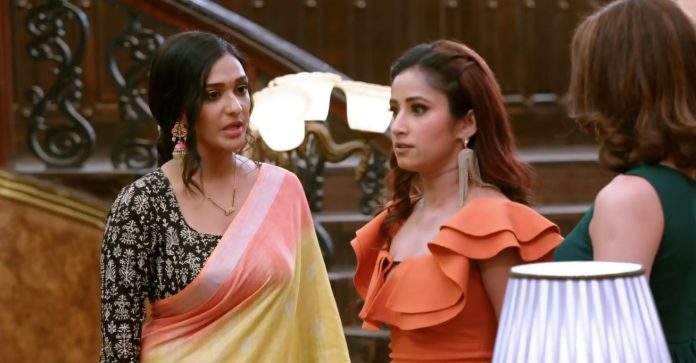 Bhagya Lakshmi 19th April 2022 Written Update New Challenge Rishi tells Lakshmi that Malishka didn’t keep any condition, Lakshmi had signed the divorce papers by her own wish. Karishma also defends Malishka. She tells that Lakshmi has come for the sake of money. Lakshmi asks them if they don’t know what Malishka wants. She asks them to ask Malishka about it. She tells that Virender is right, she was helpless to sign the divorce papers. She can’t tell Rishi that she had come to stay with Rishi. Malishka asks Lakshmi if she wants to make the family against her. She tells that she was going to sort out things, Lakshmi chose to divorce Rishi. She reveals her condition. She tells that Lakshmi had no problem before but now she is mentioning her condition.

She asks why didn’t she tell Rishi if she didn’t want the divorce. Lakshmi tells that she wanted to go to the court and found it a right thing. Malishka taunts that very soon Lakshmi will be Rishi’s ex-wife. Rishi wants to go to the office. Lakshmi asks them to have the sweets first and then leave. Dadi likes the sweets and asks Rishi to have it too. Lakshmi is glad that Dadi liked it. Rishi refuses to have it. Lakshmi tells that Rishi is her husband and should eat the sweets. Neelam asks Rishi to eat it.

Lakshmi asks Malishka to stay away from her husband Rishi. She tells that Rishi is her husband, Malishka wants to separate them, but she won’t let this happen. Rishi tells Ayush that he won’t have the food prepared by Lakshmi if she gets late. Malishka is ready to do anything to make Rishi and Lakshmi away. Karishma and Malishka plan to spoil the food prepared by Lakshmi. Lakshmi tells Shalu that she will have lunch with Rishi. Malishka wants Rishi. Lakshmi wants Rishi’s life secured and thinks to stay close to him.

She asks Rishi what will he have in lunch. He tells that chefs will make the food for him. She asks him to have the food prepared by wife, a marriage stays well and balanced. She threatens him about meeting the judge. He tells that he eats lunch at 1.30 pm sharp, if Lakshmi doesn’t come on time, then he will complain to the judge about her. Lakshmi tells that she will come on time. She rushes to make the food for Rishi. She recalls Virender’s upsetness. She wants to regain his trust. She knows it will take time to regain the lost faith. She never thought that she will make Virender cry. She doesn’t know if he will believe her reasons or not. She thinks of motivating herself and winning back the trust.

Lakshmi speaks to Shalu and thanks her for always being there for her. Shalu tells that Lakshmi is a blessing for her. Lakshmi asks Shalu to come and meet her. Shalu leaves for Oberoi mansion. Malishka interrupts Lakshmi. She asks Lakshmi if she wants to trap Rishi. She insults her upbringing. Lakshmi warns her to stop insulting her parents. She praises her parents who taught her value and respect others’ emotions. She tells that she had tried to understand Malishka. She threatens Malishka. She tells that she won’t let anyone separate Rishi and her. She didn’t wish for the divorce.

Rishi tells that he will have the food sharp on time, he will complain to the judge if Lakshmi gets fine. He wants to find more of Lakshmi’s flaws and divorce her. He tells that Malishka will be happy when the divorce happens. Malishka tells Karishma that Lakshmi will not spare Rishi so easily, she is here for money. Karishma asks her to plan something. Ayush discusses work with Rishi. Rishi is still thinking of Lakshmi. He thinks to lessen the time and defeat Lakshmi in the challenge. Shalu meets Lakshmi. Lakshmi tells that the family is upset, but Malishka is troubling her a lot.

She wants to be with Rishi and protect him. Malishka tells Karishma that she has to make Lakshmi away from Rishi, she is cooking the food for him. Karishma asks her to spoil the food. Malishka tells that she can’t spoil the food, but she won’t let the lunch reach Rishi on time. Lakshmi tells that she will stay around Rishi by threatening him of the judge. Both Lakshmi and Malishka decide to be close to Rishi.

Reviewed Rating for Bhagya Lakshmi 19th April 2022 Written Update New Challenge: 3/5 This rating is solely based on the opinion of the writer. You may post your own take on the show in the comment section below.