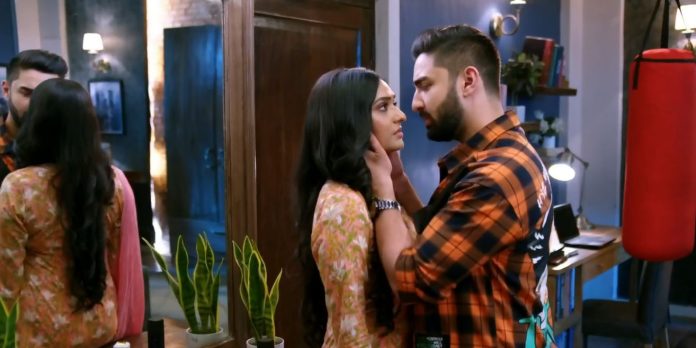 Bhagya Lakshmi 21st April 2022 Written Update Romantic Rishi Rishi tells Lakshmi that he cares for her. He gets occupied with her thoughts. Neelam asks Rishi to stay away from Lakshmi. She doesn’t want Lakshmi to go close to Rishi. Rishi and Lakshmi see each other. He asks Neelam how can he stay away from Lakshmi. Ayush tells that he has to go for a business meeting. Neelam tells Virender that Rishi can also go for the meeting and finalize the deal. Rishi asks Lakshmi if she has no feelings for him. She denies her feelings. She both come much closer. Rishi asks Lakshmi can’t she feel his breath. He holds her face and goes close towards her. Lakshmi and Rishi land into a romantic moment. Malishka tells Karishma that she has to tackle Lakshmi and for this, she has already planned something.

Earlier in the show, Lakshmi and Rishi get into a funny banter. She tells that she won’t feel anything for him if he makes her jealous. He tells that he never saw her romantically, he never gave her a reason to feel. She tells that she doesn’t have that love feeling for him. He goes close to her to make her feel for him. They share a romantic moment. She tells him that she isn’t feeling anything. He tells that they are in the office, so she won’t feel anything. Lakshmi laughs at him. She falls into his arms, just when Malishka enters the cabin. Rishi tells that he had saved Lakshmi from falling. Malishka reminds that he couldn’t save her from falling.

Malishka turns upset with Rishi. He follows her and asks her to listen. She walks away in anger. He blames Lakshmi for this. He goes back. She gets upset that he didn’t come after her. She thinks to complain to Neelam about him. Rishi asks Lakshmi is she happy now, Malishka got upset with him and left in anger. She asks him what wrong did she do. He tells that Malishka has a problem with her presence. She tells that she is his wife, she will stay with him, its not her problem. She asks him not to get angry on her. He asks her why didn’t she walk carefully, he would have not held her and get seen by Malishka. She asks did Malishka leave seeing them close. She tells that he is wrong, he is the reason for Malishka’s upsetness. She asks for whom does he care more. He tells that he cares for her. He adds that she will go to judge and complain if he doesn’t care for her. She sits there and smiles.

Rishi gets distracted by her. Ayush comes to call Rishi. Lakshmi asks them don’t they get bored sitting in the cabin. Rishi asks her to go home with Ayush, he will come later. Lakshmi also refuses to go home alone. She tells that she will go with Rishi. Rishi tells that maybe his work finished. She tells that even her work is over now. She goes with him. Karishma asks Neelam to take things under control. Rishi and Lakshmi come home together. Neelam asks Lakshmi to go away, she has to talk to Rishi. Malishka tells Neelam that Rishi always saves Lakshmi when the latter falls down.

She asks him to say what he did with her in the bathroom. He asks her will she fall to this level. She tells that he had kept a fake lizard in the bathroom to scare her. He gets angry on her. Malishka asks Rishi will he stay with Lakshmi in this way. Neelam asks Lakshmi to leave and let her talk to her son. Lakshmi apologizes and goes away. Neelam asks Rishi what is he doing, why is he behaving such, he should stay away from Lakshmi. He asks how. She asks him to maintain distance. He tells that he sleeps on the couch, but later he had to sleep on the bed. She asks him to set some boundaries and not let Lakshmi cross it. he goes to his room. Virender and Ayush come home.

Neelam asks Virender why didn’t he send Lakshmi home when she came to office. Virender tells that he didn’t know that. He asks Neelam to just forget the little things, three months will pass soon. She tells that she has a right on her son. She wants him to explain Rishi. Karishma and Malishka tell that Rishi shouldn’t care for Lakshmi. He tells that Rishi is a good person by nature, but he will still try to explain him. Ayush tells that he has to leave for Mahabaleshwar for the resort project. Karishma tells that Neelam has gone to talk to Virender, its related to Rishi. Lakshmi apologizes to Rishi. He tells that she is trying to be a good wife.

Their moment breaks when someone knocks the door. Ayush comes to call Rishi. Rishi leaves from the room. Neelam tells Virender that Rishi should go to Mahabaleshwar, the change will relieve his stress. He agrees. She doesn’t want Lakshmi to go close to Rishi and mislead him. Ayush apologizes to Rishi. Rishi tells that he fought with Lakshmi. He thinks why did he feel for Lakshmi. Ayush tells that he has to go to Mahabaleshwar to see the resort. Rishi goes to Ayush’s room to take rest. He thinks he doesn’t like Lakshmi, he shouldn’t go close to her. Lakshmi gets tensed that Rishi will understand her feelings. He wants Lakshmi to understand what he feels. She admits that she feels for Rishi.

Reviewed Rating for Bhagya Lakshmi 21st April 2022 Written Update Romantic Rishi: 5/5 This rating is solely based on the opinion of the writer. You may post your own take on the show in the comment section below.