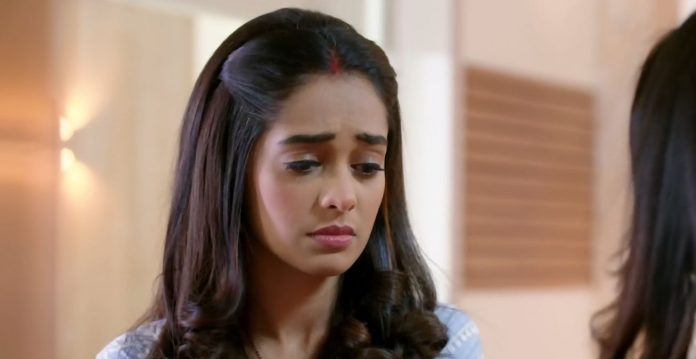 Kumkum Bhagya 25th April 2022 Written Update New twist Pallavi’s words hurt Prachi a lot. Prachi feels really terrible when Pallavi accuses her. Pallavi curses Prachi to get separated from her child if in case she becomes a mother in future. She tells that Prachi is the bad omen in their lives, Prachi has snatched Ranbir from his family and made him so mad in love that he is on death bed today. Prachi decides to not let her pregnancy news come out. She was thinking to tell Ranbir about her pregnancy, but now changed her mind because of Pallavi’s reaction. Prachi tells Shahana that nobody should know that she is carrying Ranbir’s baby, she is pregnant.

Shahana tells her that she will not tell anyone about it. Prachi cries. Vikram tells that he has already heard them. Prachi gets tensed and shocked seeing Vikram there. She didn’t wish her pregnancy truth to get revealed in this way. Earlier in the show, Rhea tortures Nick and asks how did he get Ranbir shot. She wants an answer. Pallavi asks Prachi to answer her, why did she do this. She cries for her son. Prachi asks Pallavi not to blame her.

Pallavi tells that Prachi has ruined Ranbir’s life, she separated him from family too, she is a curse on his life. She asks her if she hired Nick to get Rhea kidnapped, did she want to get Ranbir killed. Prachi asks her not to say such things. Pallavi asks Prachi to listen to her and get away. She tells her pain that’s caused because of Prachi. She tells that Prachi can’t understand the pain of a mother, she can never experience such pure emotions. She angrily curses Prachi. Shahana asks Pallavi how can she curse another mother. Pallavi tells that Prachi isn’t a mother, she can never become a mother because of her deeds. Prachi is left traumatized by her curse.

Pallavi tells Prachi that she doesn’t think the latter can ever become a mother. Prachi is shaken up. She asks Shahana to come with her. Pallavi asks Prachi to leave from Ranbir’s life. She sheds tears. She prays that her son gets fine. Prachi asks Shahana why did she say about the baby. She tells that just Ranbir should know about the baby, she will tell him when h gets fine. She adds that it would have been a big problem if Pallavi got to knew the truth that she is pregnant with Ranbir’s child. Shahana assures that she will not tell anyone about it. Vikram tells them that he heard it. Prachi gets tensed. On the other hand, Rhea angrily hurts Nick and asks how did he shoot Ranbir.

Nick pushes her away. Rhea hits his head. She tells that Ranbir is her love, her life, she can’t tolerate his pain. Nick tells that Tony has shot Prachi, but Ranbir has come in between. He adds that Tony wanted to kill Prachi as he was hired for that purpose. He tells that he wants his money, he wants to come out of this mess. Aaliya tells that she will give him money and also leave Preeti. Rhea tells that she just wanted to leave from the hospital, she has not informed Pallavi before leaving from there. Aaliya asks her to go to the hospital. She asks Nick to stay in his limits. Nick requests her to give his money and also Preeti. Aaliya hands over the cash to Nick. She opens the cupboard and shows Preeti captive.

Nick asks Preeti is she okay. Aaliya asks them to get out and not come from tomorrow, else Preeti will be questioned. Preeti worries for her job. Nick tells that he is with her, he doesn’t want her to work. Aaliya tells that she will manage everything and lie to the family. Vikram asks Shahana what was she telling Prachi, what does she want to hide. Prachi tells that Shahana doesn’t want anyone to know, she is upset with Pallavi. Shahana tells that Pallavi scolded Prachi, but Prachi didn’t let her argue. He questions her about the baby.

Shahana lies that she was talking about Pallavi, Ranbir’s mom. Vikram tells that Pallavi used to care for Ranbir much in his childhood, she is still the same, she is just concerned for Ranbir. He asks them to forgive Pallavi for her harsh words. He apologizes on Pallavi’s behalf. Prachi tells that she can understand that Ranbir is in critical state. Prachi asks Shahana to look for a gynac soon, she is feeling pain. Shahana takes her. Vikram consoles Pallavi. He tells that Dida is coming, she will also cry if she sees her crying. He asks her to be strong. He tells her that the best doctors are treating Ranbir, he is also strong, nothing will happen to him. Dida asks Vikram to take her to Ranbir.

He asks her to have patience, he will be okay and she can meet him. Doctor tells them that he has treated Ranbir, he is out of danger now, they can meet him. Vikram thanks him. Doctor tells that Ranbir is lucky that the bullet just touched his arm. Prachi gets a checkup done. She asks about the baby. The doctor asks her why didn’t she take care of the baby. She calls Prachi a careless mother. She tells that the baby is fine now, but she doesn’t think the baby will be safe, because of Prachi’s carelessness. Prachi cries and tells that she fell down, she is sorry that she didn’t take care of the baby. Doctor asks her to take less stress. She suggests that Prachi goes to her Maayka if there are issues in her in-laws.

She asks Prachi to stay happy and look after the baby. She tells that the pregnancy is complicated, the delivery can be risky. She asks Prachi to lessen the stress level. Prachi tells that her husband was attacked, he was shot, she has to be with him. Doctor asks her to take care. Vikram and Pallavi meet Ranbir, who looks for Prachi. Doctor tells that Ranbir is fine now. Ranbir tells that he is much better. Pallavi cries meeting him. He asks her not to cry, he is fine now. Dida blames herself that she didn’t call the police.

Ranbir fakes pain and tells that he is feeling hurt that Pallavi and Dida are crying. Pallavi and Dida ask Doctor to check Ranbir. Ranbir laughs and asks them to not cry again. He tells that he is okay, they should be smiling. He asks for Prachi. Dida tells that she didn’t see her. Rhea comes back to the hospital. Rhea asks the nurse to do the bandage to her forehead wound. Aaliya also arrives and looks for Rhea. She calls Rhea. Rhea tells that she is getting the wound dressing done. Nurse asks Rhea to take medicines. Rhea tells that she has to rush to see Ranbir. Pallavi tells Ranbir that she got angry on Prachi, and the latter left. Vikram tells that he spoke to Prachi, and then she doesn’t know why she left.

Ranbir thinks she has gone home, she must be exhausted. Pallavi tells that she would have not left her husband in the hospital if this happened with him. Dida asks where is Rhea. Prachi tells that the report will be at the reception, nobody will know about the pregnancy. Shahana asks her to stop taking stress. They go to the reception to take stress. Ranbir tells that Prachi will get well soon and then come to take care of him. Pallavi tells that maybe Rhea has thought the same. Rhea and Aaliya come to meet him. Ranbir asks Rhea not to cry, he is okay. Aaliya tells that Rhea is much hurt, she loves him a lot. He tells that he is totally okay, he can go home. Vikram asks him to take rest. Ranbir requests the doctor to issue the discharge. Doctor agrees to him. Rhea thanks Ranbir for saving her life.

Reviewed Rating for Kumkum Bhagya 25th April 2022 Written Update New twist: 3/5 This rating is solely based on the opinion of the writer. You may post your own take on the show in the comment section below.