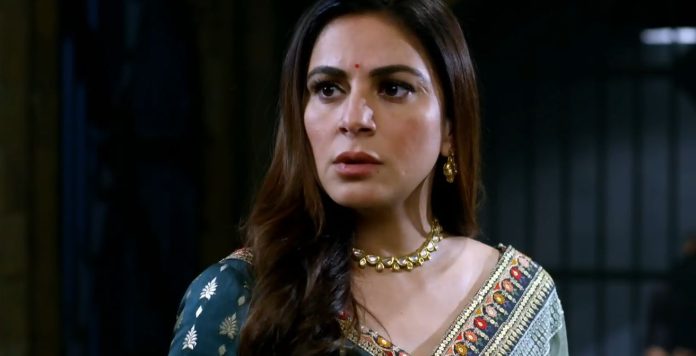 Kundali Bhagya 25th April 2022 Written Update Heartbreaker Preeta tells Prithvi that she has come to save Karan as a business partner, not as a wife, because Karan is just a golden egg laying hen for her. She tells that Karan would earn crores and bring the money in the family, money is the thing that matters to her and she is seeing business only. She tries to show her rude take on Karan’s arrest so that Prithvi doesn’t create hurdles for Karan further. Preeta has different intentions of humble support, but proves it otherwise. Karan overhears their conversation. He feels hurt when Preeta tells that Karan means nothing to her. Prithvi asks Karan did he hear what Preeta told about him, that he is not her husband but not a golden egg laying hen.

Preeta gets stunned to know that Karan has overheard her bitter statements. Prithvi creates a rift between Karan and Preeta. He tells Preeta that Karan also got to know where he stands in his life, and that’s the thing he was explaining to Karan till now, that Preeta doesn’t want to be associated with a stained player’s defamed name. He further insults Karan, and mocks the relation between Preeta and Karan, which they were proving strong till now. Karan can’t believe whatever Preeta said and goes into disbelief. He wants an answer from Preeta. How will Preeta handle Karan’s temper? Keep reading.

Earlier in the show, Rakhi’s hopes on Preeta breaks. She cries. Kritika tells that Preeta has failed in every relation. She wants Rakhi to see the truth. The reporters ask Preeta about the cash source. Preeta tells them that she has told whatever she had to say. Prithvi asks Karan to not have any expectations from Preeta, she will not come to bail him, she just gave the statement and left. He calls it the end of the story. Karan asks him to please leave him alone. Prithvi asks him to take care and call him if he needs anything. Karan gets regretful thinking of Preeta’s words.

Shrishti asks Preeta what did she do. Preeta tells that she wanted to show her trust on Karan, but nobody would have believed it if she sounded just like a wife, everyone will think that she is supporting Karan because she is his wife. She tells that she wanted to show that she isn’t blindly believing Karan, she has made Karan her business partner and showed her faith on him. She tells that someone has tried to trap Karan. Shrishti tells that media has taken a wrong meaning of her statement, now Luthras will be upset with her. She asks Preeta not to take stress, things will get fine. Preeta tells that she will go and talk to Karan, she wants to meet him and relieve his stress.

She adds that she will hire a lawyer for him. Preeta comes across Prithvi, who taunts her. He tells her that he was in jail before, but now he is with the Luthra family. He reminds that Preeta has come back to take over the business, he was thinking if she really has no love for Luthras, he was wishing that she is saying the truth, he wanted to snatch everything from her, but today she has given him a shock by confessing that Karan is just her business partner, not her husband. He tells that just money matters to her, just like him. He adds that he told Karan that even family breaks relations when bad time comes, she has proved this. He tells that if she saves Karan, then it will prove that she loves Luthras. He threatens to ruin her and Luthra family. Preeta wants him to live under the misunderstanding and handle the situation. She asks him to shut up.

Preeta tells that Karan isn’t a fool to believe him, he knows why she said that. Prithvi asks Karan not to come in Preeta’s words. He warns Karan against making the big mistake of his life. He makes a leave. Preeta tells Karan that she can explain the reason for her statement. Karan tells that he is tired, he will talk to her later. She asks him to think anything he wants, but she promises to prove him innocent and get him out of the jail soon. She assures that she is with him. Moreover, Prithvi meets Shrishti and gets scolded by her. She asks him to just leave. He tells that he isn’t like her, she might be upset that Karan is jailed, she loves Karan and Preeta, she is hurt seeing them in trouble.

The reporters ask Shrishti what does she think. Shrishti avoids them. Preeta asks Shrishti what happened to her. She tells that she met Karan, who is misunderstanding her. She decides to meet the lawyer. She asks Shrishti to meet Karan and put some sense in him. Shrishti thinks this time Preeta has to prove Karan and herself innocent by struggling a lot. Lawyer Malkhani talks to his associates. He tells that the case might get against Karan, because the evidences are strong. Preeta meets him. She tells that she didn’t know that he is already studying Karan’s case. He tells her that Sameer has hired him for the case. She asks him to trust Karan, he is really innocent. She is ready to give him the information needed.

He tells that he will call her. She tells that she will pay any amount for his fees. She wants him to give his best. Shrishti wants to meet Karan. Inspector doesn’t allow her. Sameer arrives there. Shrishti and Sameer request the inspector. Inspector tells that already Prithvi and Preeta have met Karan. Sameer tells that he has to meet Karan and tell him about the lawyer. Inspector allows them to go. Luthras get upset seeing the news. Prithvi comes home. He switches off the tv. He asks them to stop watching the news, the truth is that Karan is innocent. He tries to gain their sympathy again. Sherlyn gets a smile watching his drama. Prithvi tells that he is feeling bad for Karan. She thinks the Luthras are getting expectations from Prithvi, they don’t know that Prithvi has plotted to get Karan jailed.

Reviewed Rating for Kundali Bhagya 25th April 2022 Written Update Heartbreaker: 4/5 This rating is solely based on the opinion of the writer. You may post your own take on the show in the comment section below.