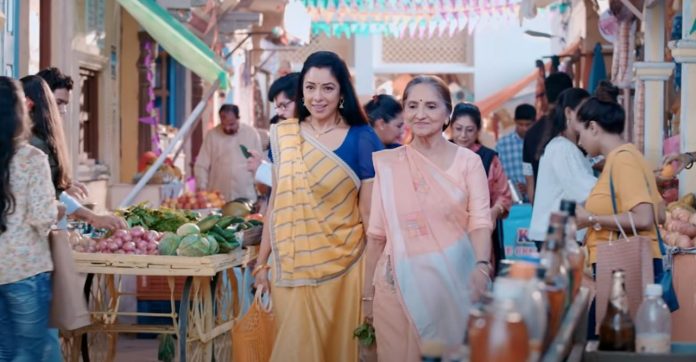 Namaste America Anupama 25th April 2022 Top Spoilers Namaste America Anupama – Baa’s boundless support Baa and Anupama are buying vegetables when a neighborhood guy comes to speak to them. He says he heard that Anupama is going to America to teach dance. He taunts Anupama that it doesn’t look nice if daughter-in-law does dancing. Baa shuts up the man by telling him to pick up his fallen narrow-mindedness. Anupama and Baa clap hands and leave proudly.

Rajeev comes dancing in his open car for the marriage. The Chavans welcome Rajeev. Shivani is all decked up for her marriage in a beautiful Maharashtrian bridal attire. Virat misses Sai and gets worried because Sai accepted the conversation she had with her father last night as the truth. He wishes that she comes back and attends the wedding with him.

Dhara confronts Raavi and asks her what happened at the party that day and what did Janardhan gift Dev. Raavi and Suman are startled. Shiva shows Pandya and Grandson Store Original to Dhara and says that Janardhan gifted this to Rishita and Dev on their anniversary. Dhara is shocked to read the store’s name.

Bhavna tells Diya that she has to search for a star named Arundhati. She points towards a star named Vasishtha and informs Diya that a faintly appearing star near to it is Arundhati. Diya is not able to see it. Bhavna tells it is said that a person who cannot see Arundhati star will surely have an affair. Diya says that it’s all rubbish and how can she say that. Bhavna says that she was joking but Armaan scolds her.

Dev’s body is lying under Revati’s car. Rudraksh tells Preesha that they somehow need to remove Dev’s body from there. Saaransh asks Alia if they found Dev and she says that her mom will find him anyhow. Revati is called for Mata’s jagrata and she leaves. Rudraksh and Preesha are waiting outside Revati’s house. Revati’s mobile falls and her leg is hurt. She bends down to pick up her phone. Rudraksh tells Preesha that Dev’s hand has come out of the sack.

Aryan hears Imlie talking to herself that she will not let this happen. Aryan confronts her and asks exactly what will she not let happen. Imlie is blank. Aryan says that it is the question of Arpita’s marriage and he will not let her plan succeed. He drags Imlie along with him. Imlie tries to loosen his grip.