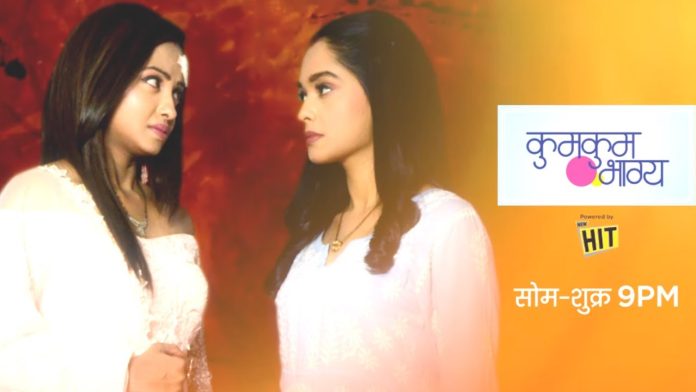 Kumkum Bhagya Prachi battles Rhea 28th April 2022 Prachi becomes very caring towards Ranbir after he gets shot. She kisses her hand and sits close to him. Prachi tells Rhea that she is sure about her being behind Ranbir’s condition but she only wanted Ranbir. Prachi tells Rhea that she is interested in being an illegal co-wife than a sister. Rhea warns her that Ranbir can never be hers. Prachi tells that Ranbir was and will always remain hers. Rhea challenges Prachi that only time will tell that.

Pari tells Kaju that Neel always saves her. Kaju says that she is very lucky to have someone who always understands her and takes her side. Pari asks Kaju if she also wants someone who never leaves her side and Kaju feels shy. Pari says that she will speak to Neel and he will never leave her. Kaju smiles at Neel. Neel asks Kaju to promise him that from now onwards she will only listen to her heart. Kaju promises him happily.

Nakul and Krishna chase Chiranjeev and playfully apply haldi to him. They both smear a lot of haldi on his face. Saroj feels very happy seeing her sons and prays to god that her Trimurti should stay away from the evil eyes. Anjali clicks Nakul, Krishna, and Chiranjeev. Kusum asks Krishna to take Sayuri’s handprints on a cloth but slips and ends up putting his handprints. Sayuri and Krishna look angrily at each other.

Banni informs that in today’s menu of Banni Chow Home Delivery there is Bharwan Baingan, Karela fry, Mutter Pulao, and Khira Raita. Banni says that no vegetables are less than 100 rupees in the market but with her food’s taste one will receive love, affection, and motherly vibes free of cost. It starts raining heavily and Banni’s aunt tells her to be careful. Banni promises to teach a lesson to people who eat by borrowing.

Shagun gifts new shoes to Yug. He says that it’s not his birthday but she says that she cannot wait for any special occasion to gift her brother. Yug hugs Shagun. Yug tells Shagun that her boss Shubh gifted his sister a car worth 5 crores. Navya becomes unhappy and asks for a pink color. Shubh orders Yug to arrange for a pink color car of the same model. Shubh can do anything for his sister’s happiness and even marry Shagun. Shagun can also tolerate very problems for Yug and even the marriage with Shubh.